We fatwa Magnet, chat up Ken Bethea and wonder what exactly is going on with Todd Rundgren's Web site 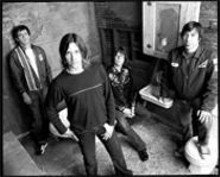 Ken Bethea is right, and it's not the first time we've been corrected. In the early '90s, when the guitarist met songwriters Rhett Miller and Murry Hammond, the Old 97's weren't even a glimmer in the bloodshot eye of a swelling alt-country scene. Eleven years and six albums later, they're the most representative band of that mangy, catch-all genre not because they've clung to Texas country rock, but because they've torn up their roots -- just for fun. Bethea brings B-Sides up to date.

B-Sides: I tried to get an interview with Rhett, but he was busy. Then I tried Murry; he was busy. I feared I'd be talking to the drummer.

Ken Bethea: Man, you got passed down hill. Rhett is busy [working on his second solo project]. Murry's always dilly-dallying with his wife [Grey DeLisle]'s career.

So why did you kill alternative country?

You mean the band? I think what happened was, well.... [Pauses]

I'm recording, so anything you say can and will be used against you.

I figured as much. When you start a band, you do what you do well. By our third album, we'd nailed what we were angling for. We made our third album, Too Far to Care [in 1997]; it had that sound -- fast, energetic, smokin', cool. If you do that again, so what? I'm a big AC/DC fan, but come on. You can't make Back in Black over and over.

The new concert DVD is spiffy. Do you think it's weird that people sit at home alone, in the dark, and watch you do guitar solos?

I get weirded out by watching myself. But it doesn't bother me that other people watch. I've come to accept the fact that people stare at me. Honestly, I haven't seen the DVD.

It's not exactly This Is Spinal Tap. If I had a plasma TV I might get more out of it.

The guy who filmed it understood us, that we weren't into glamour shots. We had some guys show up once for a photo shoot, this was in the fall of '98, and all the clothes were hip-hop. I'm not bullshitting. Big square pants, big hats. They were cool guys, but we had to tell them, "We don't wear those kind of clothes." -- Roy Kasten

Oh, What a Tangled Web

There's lots of pornography on the Internet, to be sure. Most of it is disturbing, self-glorifying and utterly rooted in fantasy. While not strictly pornographic, Todd Rundgren's Web site (www.tr-i.com) may be the biggest wank-fest out there. Upon entering, one is greeted by a Matrix-like Rundgren in black leather and Bono shades; again, disturbing. To go further, you must endure several mini-movies about the varying skills of Sir Todd: guitarist, producer, performer, faith healer, world's strongest man. This digital C.V. goes on for at least four minutes, probably longer; I had to turn it off and dig out my copy of Something/Anything?, Rundgren's wonderful double-album from 1972, to remind myself of why I like this guy. That album finds a pop wizard at work, crafting catchy, complex songs that sound tailor-made for radio, from the piano pop of "I Saw the Light" on through to the Cheap Trick-like swagger of "Slut." Rundgren may or may not have a new album coming out; as mentioned above, his Web site made it impossible to find this out. Is it unfair to ignore someone's new work and focus on the salad days? Absolutely. It's as criminal as subjecting your fans to second-rate, self-indulgent pap.

At the other end of the spectrum, Joe Jackson's Web site (www.joejackson.com) is tasteful and modest, much like the man himself. At the very least it has such vitals as tour information, a review archive and a great video of Jackson singing Pulp's "Common People" with Ben Folds and Bill Shatner on The Tonight Show. But before playing the straight man for this musical in-joke, Jackson was best known for being the piano man of the post-punk scene. He wrote and recorded no small share of hit songs, none more enduring or more perfect than "Steppin' Out." It may be the perfect song, period. A mix of the modern and the timeless, the song is sonically a product of its time and thematically universal. The rhythm section is completely synthesized, with a bass line that should be sampled in every hip-hop song. Amid the addictive 808/303 rhythm, Jackson's grand piano sweeps in from stage left and, with the help of Springsteen's glockenspiel, carries the melody heavenward. Like "Born to Run" or "Thunder Road," it's a song about escaping the trappings of modern life ("we'll leave the TV and the radio behind") and love's catalytic power ("get into a car and drive"). "Steppin' Out" may be used to sell cars or pad Awesomely Outrageous 80s! comps, but the song's genius cannot be diminished. -- Christian Schaeffer

All hail Lester Bangs! For now we live in a time of false scholars who stain his memories with their sophistry. Too long have we sat back and watched pretenders prance in false beards. We must declare a fatwa on Magnet magazine.

Long has Magnet clouded the minds of those searching for truth, uselessly name-dropping obscure bands to frighten acolytes and make the music less accessible to the fans. Pharisees! It is not necessary to mention Scratch Acid, Halo of Flies, Killdozer, Pussy Galore, Big Black, the Butthole Surfers, the Cows, Nirvana, the Fall, Wire, Gang of Four, Joy Division and the Birthday Party in a single review, as they do in their latest issue.

But that is an old sin for this magazine. Now, Magnet covets the advertising dollars of their high-profile sisters Spin and Rolling Stone. Like a toddler trying on a sibling's clothing, Magnet has girded itself in ill-fitting glossy pages and Josh Homme covers. But, much like a child smearing lipstick in a deformed rictus on her face, the results are disturbing: Witness this month's cover story on Sleater-Kinney, who are interviewed by...Eddie Vedder? Vedder, who works in a mention of his washed-up band by column two of the article, represents a very sad state of hip, Magnet. Perhaps Black Oak Arkansas would like to interview Son Volt next issue? Could Leif Garrett interview Bright Eyes, pray tell?

Fatwa! Cursed forever are you unto your children's children to describing an album as "like Television jamming on Captain Beefheart with a Slits rhythm section at a party held by Orange Juice in P.I.L.'s kitchen" to people who just want to know if it rocks.

It is written. -- Ayatollah of Rock

Jump to comments
« The Basement Tapes   |   Go West (and North and South and East), Young Men »