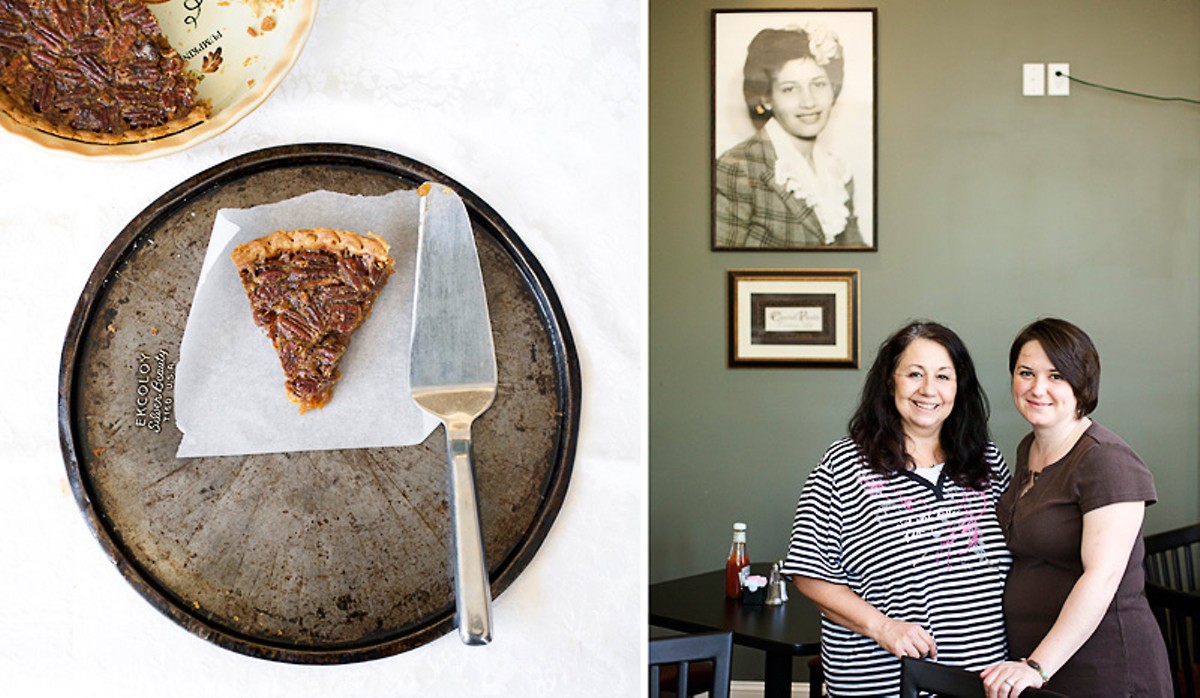 Mary Samuelson and her daughter, Amy Keller, before a portrait of Mary's mother, Josephine, for whom the restaurant was named. See more photos from Mama Josephine's. Jennifer Silverberg

Mama Josephine's face watches over diners from the wall of her namesake restaurant, but fear not: She is no hectoring mother of dinner tables past. There is no "Sit up straight" here, no "Keep your elbows off the table," no "Clean your plate. Children in Africa are starving." In fact, the sepia-toned portrait photo shows the late Josephine Spallino circa 1940, a young woman — a teenager — with a flower in her hair.

Mary Samuelson, Josephine's daughter, greets me as I enter the small restaurant that she opened in March in the Shaw neighborhood. This is a few blocks from where my wife and I recently bought our first house, and while Samuelson and I don't know each other, and she has no idea that I live down the street, she treats me more like a neighbor than a customer — not falsely friendly but comfortably familiar.

A man with a Southern accent stops by to drop off a borrowed dish. After he leaves she tells me, her voice rich with her own Southern drawl, "Sure is nice to hear another Southern accent around here." Later, when she has to leave for a bit — when, honestly, I might not even have noticed her absence — she makes sure to mention that she's heading out because she has run out of broccoli.

That casual feel extends to the single dining room. You might find Samuelson herself sitting at one of the tables, reviewing paperwork. The photograph of Mama Josephine is the most prominent piece of décor. The windows give the space an airy feel and afford a view of a leafy residential block of Shaw Boulevard, including what appears to be a new community garden across the street, all of which only reinforces the sense that you are in a neighborhood restaurant.

The recipes are Mama Josephine's, honed not only over countless dinners cooked for Samuelson but also in a career that included her own café. The cuisine is Southern home cookin', drawn from Spallino's Louisiana upbringing, with a nod to her Italian heritage. This is one of the very few restaurants — maybe the only one in St. Louis — where one can order both fried okra and lasagna. (Though not, thankfully, in the same dish.)

On this visit I order the fried chicken: a leg and a breast, along with two sides and cornbread. Samuelson makes sure I have the time to wait. The restaurant has neither a deep fryer nor a pressure cooker. The chicken is pan-fried to order, which takes at least twenty minutes. Pan-fried chicken? Heck, I'd be happy to wait even longer if that proved necessary. The two pieces arrive a lovely light golden-brown, the crisp batter speckled with spice. The meat is juicy but not greasy and, with a dash of salt, just about perfect.

On the side, as if transported directly from the meals of my childhood and yours, are mac & cheese and green beans. The mac & cheese eschews all the gourmet tricks of recent years. This is elbow macaroni in a cheese sauce best described as vibrantly yellow, with the rich tang of a thousand grilled-cheese sandwiches past. The green beans have been boiled into submission, soft and a deep, military green. Their appeal is strictly nostalgic. The cornbread is soft and sweet and has me searching in vain for fresh butter to slather atop the slice.

The lasagna is served in a large bowl, as sure a sign of any of its serious intent. There are eight layers, though you will likely be too busy digging into the gravy-thick meat sauce — simmered for eight hours — to bother counting. The proportions are key here: The lasagna does not swim in its own sauce, nor do the noodles overwhelm everything else with their floppy blandness. There is exactly enough soft, sweet ricotta, precisely enough melted mozzarella.

As a general rule, I dislike catfish, which I usually find insipid at best, or with an oily, almost gasoline-like flavor. At Mama Josephine's, though, the fried catfish, beneath its crunchy batter, yields tender, very white flesh with a clean, ever-so-sweet flavor. On the side are hush puppies as dense as the St. Louis humidity.

Speaking of dense: "Meat Loaf Mama's Way" is very thick, and though the menu lists onion, breadcrumbs and bell peppers among the ingredients, this is no filler-stuffed loaf. The meat is Angus beef, fork-tender and very richly flavored. I am no meat loaf purist — as a kid I hated the stuff — but I understand there is some debate among you about the appropriateness of ketchup atop the loaf. Know that here there is: a glaze like frosting, sweet and tangy and, to my palate, just right.

There is even barbecue, if only in the presence of a pulled-pork sandwich. The pork is cooked over hickory wood and then topped with sauce and, in the Memphis style, cole slaw. The sauce is on the sweet side, with a mild bite, and the cole slaw is crisp and not too wet. The sauce and slaw render the meat's woodsmoke nuance moot, but the pork flavor is definite, and this is, on the whole, a very good sandwich.

The sandwich is served with French fries, which are crinkle-cut and, I fear, up-from-frozen. Most other sides fare better. The mac & cheese is awesome, the turnip greens even better: a touch peppery, wilted to an almost velvety softness. Fried corn kernels have a caramel sweetness that could serve as dessert. (If you manage to save room for dessert, this is Southern home cookin', so there must be pecan pie.)

Mama Josephine's spell is broken only when the meal ends and, instead of asking to be excused from the table so you can play outside, you have to go to the cash register to pay. You won't mind, really: The prices are exceptionally reasonable. That fried-chicken dinner costs only $6.99.

Even better, Mama won't make you stay behind to do the dishes.