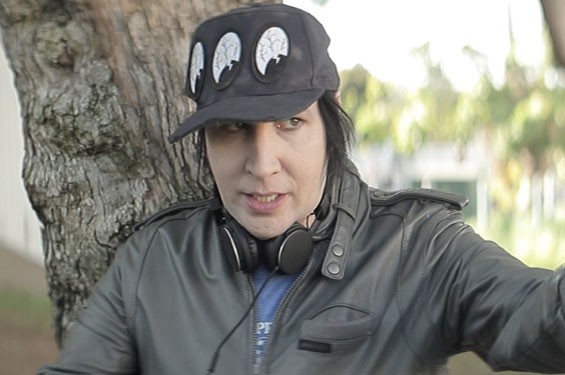 The self-dubbed God of Fuck is famous for his dark side, but he has always had a sense of humor. In 2010 he dressed up as Eastbound & Down's Kenny Powers for a photo shoot with Interview. This year, he's doubly determined to introduce audiences to Marilyn Manson, funny guy and film geek, by following up his cameo as a roller-skating waiter in Eastbound & Down with a bigger role as emo teenager David Delores Frank in Quentin Dupieux's outlandish comedy Wrong Cops, which opened in New York and on demand December 20.

A couple of years ago, around the time his assistant wrecked his car and left a single, sad tire behind in his garage, Manson watched a mind-bendingly surreal flick called Rubber about a killer tire that murders people by making their heads explode. "It was under horror films," he recalls, but he quickly keyed in to director Quentin Dupieux's sense of the absurd. "I just thought it was brilliant the first time this tire comes out of the dirt — it reminded me of a dark version of Wall-E," says Manson, adding that Dupieux is "in the realm of Dal' and Buñuel, someone who, for the sake of art, just wants to fuck things up." So he wrote the French filmmaker an e-mail and scared him to death.

"I thought it was a joke, a fake, someone weird trying to attract me in some kind of a trap," says Dupieux. Fake or not, he wrote back to say thank you, and then Manson began flooding his inbox with goofy selfies. "Weird photos," says Dupieux. "Now I know him, so I think the photos are funny. Back then, I was like, 'What the fuck? What is the message? I don't get it.'"

Manson was used to the suspicion. "It happens all the time," he notes. "When I was stalking my special lady friend on MySpace, people would always say, 'Is this really Marilyn Manson or some kind of psycho?' And I'm like, 'Both.'" Yet over the years, he has sent so many strange e-mails — they're also how he got Danny McBride's attention — that he can't quite remember which ones might have raised Dupieux's alarms.

"I'm not really sure what kind of pictures I was sending Quentin," Manson muses. "Tires? I think that mostly it was me smoking marijuana with scorpions. Not with the band Scorpions." But his movie-nerd fandom was real — he is, after all, a guy who's nicknamed his penis Michael Shannon. "He's just so angry and powerful," Manson explains. "Shia LaBeouf told me his dick was Richard Dreyfuss. Why would you pick that?"

After Manson convinced Dupieux to give him a role in Wrong Cops, the entire cast and crew got a good look at his, um, manhood. (No less an expert than Jenna Jameson described him as "massively endowed.") The costumer dressed him in jeans so tight everyone was aware of what he packed in his pants. Mainly because Manson made sure they knew how he was feeling.

The first time Manson read the script, he figured Dupieux saw him as the drug-dealing asshole cop ultimately played by Mark Burnham. "Taking in and molesting teenage prostitutes, you know, typecasting — things I would do on a Wednesday afternoon," he jokes. Instead, he was cast as the cop's victim. He's bossed around, mocked and abused. In one scene, Burnham literally kicks him in the ass.

"Usually he is the monster onstage," explains Dupieux. "I thought that was funny to reverse that process and make him scared instead of being scary."

Manson didn't mind playing a nerd. "I'll be black if you want me to be; I'll be legless if you could CGI away my legs," he says. But when Dupieux asked him to get real braces for extra accuracy, Manson refused. Fake ones would have to do. "I said, 'Look, I already had fucking braces when I was in high school. I didn't like it then, and I'm not going to do it now.'" What's surprising is how good the 44-year-old Manson is at playing a teenager, especially one who probably wouldn't listen to his own music.

Even Dupieux was surprised. "When you think Manson, you think death, skulls and baby-burning," he says. "I was picturing a rock star. I was not picturing a really smart artist. But no! The guy is funny. He just has, like, a really positive and fun energy, which I love. Every good artist is still a kid, even if that sounds corny."

"I always polarize any room," he admits. "I can't shut up. Usually it's because people think I'm drunk, and maybe it's because I am. But when you meet somebody who's funny like Danny McBride and you riff off them, it's cool because it's a different kind of collaboration than what I do in music."

Up next, Manson is reteaming with Dupieux for an upcoming comedy where he'll play a fashion photographer he describes as "a combination of Kenny Powers and Karl Lagerfeld." No matter where their partnership takes them, Dupieux will always have a permanent place in Manson's life. Literally — his wrist is tattooed with the motto of Rubber: "No reason." His buddy Depp got one to match. Says Manson, "When people ask us why, we say 'No reason.'" Hey, loving oddball art-house comedies is reason enough.