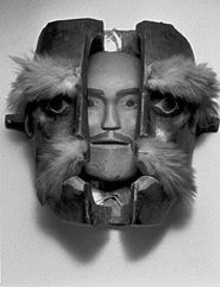 The first thing you see on entering Masks: Faces of Culture at the St. Louis Art Museum isn't a mask but the representation of one: a reproduction of a Paleolithic drawing from the caves at Lascaux, France, showing a prostrate man wearing bird-shaped headgear next to a disemboweled bison. The man is possibly a shaman, wearing the bird mask to forge a much-needed connection to the world of spirits, guaranteeing success in the hunt.

After passing through more nearly pitch-black galleries with spotlighted masks appearing to float in deep vitrines, visitors will encounter an elaborately costumed figure standing on a pedestal. The 18th-century costume and mask are made of reindeer skin, cotton and silk, with metal and glass attachments, and belonged to a Siberian shaman who, through communication with the spirit world, would have warded off evil and danger in his community.

The Siberian shaman mask, with its foreboding, gaping mouth and staring eyes, appears to be fixed on another figure a few galleries down: a man standing in a full-body NASA-issue spacesuit. The darkened opacity of his bubble helmet makes eye contact impossible, but he appears to be returning the Siberian shaman's trained gaze.

These three prominently placed objects are like points on a triangle that contains the entire exhibition, just as they contain many of the pivotal concepts and claims about masks that this exhibition is making. They represent the past, the present and the future of human history, and they foreground the different roles that masks have played within it. The use of this triad of figures is a brilliant organizational device.

Indeed, Masks is a brilliant exhibition, one of the most ambitious shows the St. Louis Art Museum has ever undertaken. Curators Cara McCarty and John Nunley spent six years traveling to roughly 50 different countries to collect more than 100 specimens of masks that bear powerful witness to a variety of enduring practices in human culture. The masks are organized in categories according to these practices: "Origins," "Rites of Passage," "Renewal," "Men as Women," "Theater" and "Offense/ Defense." It's hard to imagine a broader, more complete survey of masks and their various functions in human societies.

McCarty and Nunley have gathered examples of masking that go far beyond the expected. Fortunately they have sidestepped the obvious -- there are no Halloween or Mardi Gras masks here -- in favor of the unusual. It's an exhibition designed to make viewers reconsider what masks are and how they function. A Saudi Arabian woman's veil, shown in the same context as an African initiation mask intended for adolescent boys, certainly invites some thinking on rites of passage and gender. There are masks in this show made of every conceivable material and made for a surprising variety of uses. And one of the show's most brilliant moves has to be the inclusion of "functional" masks, sports masks and protective headgear that we rarely consider in the same context as funerary or theater masks.

With all of this variety, with all of the different cultures and historical periods represented, with all of the wild materials and unbelievable shapes and astounding functions of all of these different masks, why is it that the exhibition ends up seeming so homogenous? A distinctly consistent feel attends this show; it lurks in the background like the hum of a distant machine, but it never goes away. It can't be explained by the banal observation that these are all masks -- objects of a consistent type -- and so consistency is to be expected. And it's not due to the exhibition design, which treats all the objects as roughly equivalent, placing them on stands or pedestals lit with spotlights that keep most of the galleries in darkness.

There's something else at work in this exhibition that accounts for its homogeneity. The effect can be partly explained by looking again at the triad mentioned above -- the Paleolithic birdman-shaman, the Siberian shaman's mask and the astronaut. The connection among them is a labored sense of the "mysterious." As a group, they evoke the unknowable depths of history, the mystical realm of the spirits and the unknown reaches of other worlds. Even the astronaut's helmet, a product of empirical research and scientific engineering, comes off as some kind of shamanic device. This effect -- this aura of mystery, the unknown and the spiritual -- hangs like a veil over every mask in the show.

Undeniably, many of the masks in the show are beyond our understanding, and so they remain, in fact, mysteries to us. We can only guess, for example, that the man represented in the Lascaux cave was a shaman, that his mask was used for ritual purposes. (The word "ritual" itself too often implies mystery; it is usually used to explain patterned behavior we don't quite understand. The "mystery/ritual" association is perhaps best articulated by heavy-metal lead guitarist Nigel Tufnel in This Is Spinal Tap, who muses about the rituals of the "little children" of Stonehenge: "Nobody knows who they were, or what they were doing.")

Other masks retain a quality of mystery because of their association with death. The exhibition includes phenomenal examples of funerary masks from ancient Egypt, Teotihuacan, China and Peru. One of the most striking objects in the whole show is a 5,000-year-old stone funerary mask from the Middle East, with huge, gaping holes for eyes and a ghastly crescent-shaped smile. It looks like the embodiment of the specter of death itself.

All of the masks -- divorced from their contexts and shown isolated, often in darkness -- take on that peculiar quality of strangeness in this show, which extends even to the more familiar objects on display. In the "Offense/Defense" segment of the show, a contemporary motocross helmet, a fencing mask and a turn-of-the-century firefighter's respirator all look downright eerie. The 1964 hockey goaltender's mask looks less like game equipment than it does like some of the funerary masks in the show. The 1989 bullet-resistant mask looks intimidating enough to ward off forces much more powerful and less material than manmade ammunition.

The effect of mystery that surrounds each mask probably derives from the exhibition's central claim -- that masking is a virtually universal practice, found in all human cultures throughout history. This claim is both a revelation and a distraction. The exhibition does reveal startling connections among disparate cultures: We see, for example, that New Year's fertility masquerades are celebrated the world over, from China and Japan to Switzerland and Mexico, and we learn that throughout history, masking has primarily been a masculine activity, often involving men masquerading as women.

However, foregrounding the universality of masks can detract from an understanding of how they operate in specific cultures and periods. Within the "Theater" category, for example, which includes the Darth Vader mask from Star Wars, along with theatrical masks from Japan, ancient Rome, 19th-century Austria and the Bauhaus in Germany, specific cultural definitions of the "theatrical" are leveled out. In the case of the Darth Vader mask, the exhibition also has us bypass questions of market forces and the creation of salable icons (the mask is, after all, part of the single most lucrative franchise in Hollywood history) so that we take the mask at face value, so to speak; we focus only on what it suggests about some existential condition of "villainy."

Granted, we are given ample opportunity to learn specific historical information about each mask in the form of lengthy captions and text panels. But the aura of mystery and existentialism in the exhibition often tends to overpower that information. In addition, the print is small on these labels and panels, and it becomes extremely tiresome to strain the eyes and neck to read them; viewers who give up on the text and look only at the masks will definitely lose the historical dimension of the exhibition.

If Masks: Faces of Culture weren't such an ingenious show, it wouldn't stand up to, or even deserve, this close critical analysis. Only a well-engineered and curated show can muster up subtle effects that are worth critiquing in the first place. Although I find the show's "mystery" effect homogenizing and distracting, other viewers will probably love it, if they notice it at all. Either way, there is absolutely no reason to miss this show, a tour de force of art and anthropology the likes of which this city may not see again.

Masks: Faces of Culture is on display at the St. Louis Art Museum through Jan. 2.