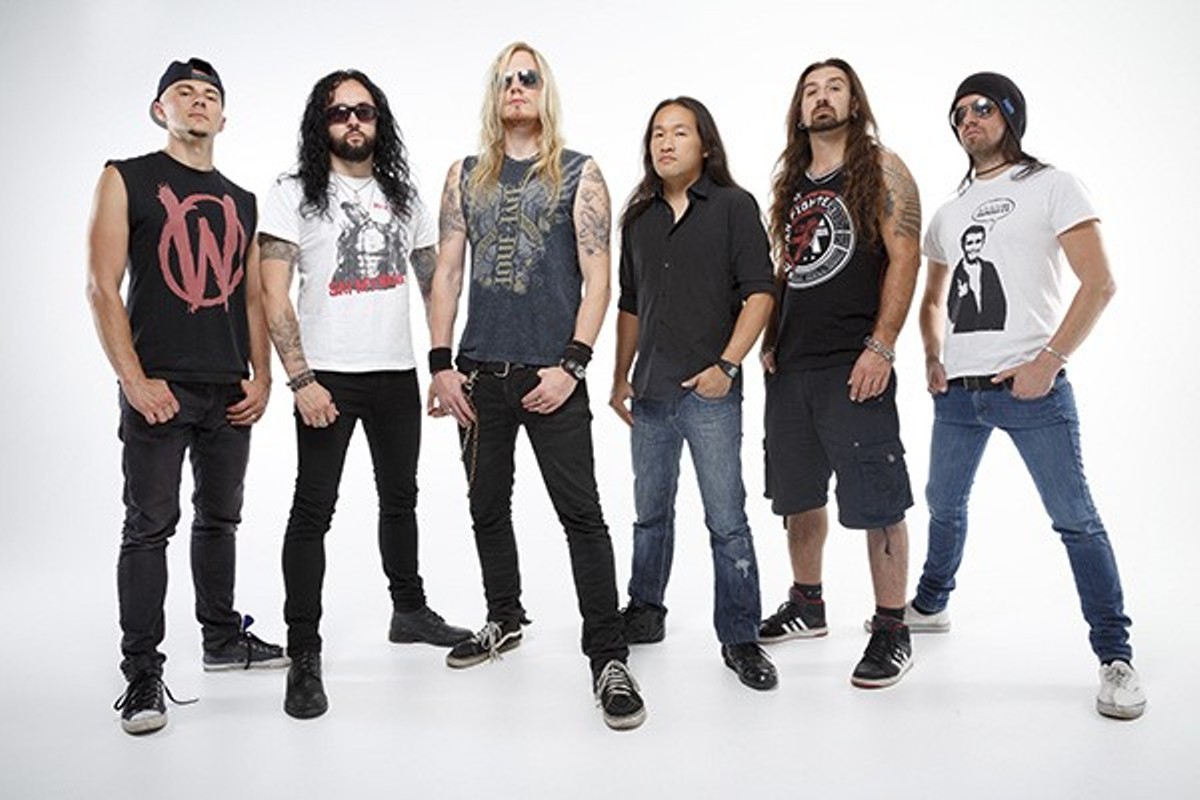 Herman Li, third from right, with the other members of DragonForce, a band as ridiculous as it is talented.

Since the band's early days, DragonForce has been built around the fretboard pyrotechnics of dueling guitarists Herman Li and Sam Totman — but that doesn't mean they share much in common outside of their ability to melt audiences' eardrums. The way Li tells it, his relationship with Totman has stayed pretty much the same since 1997, when they met in London.

"He thought I was just a complete nerd, and I thought he was a complete drunk," Li recalls. "He had two shopping bags full of booze and a guitar that was just totally falling apart. I had never seen a guitar in such bad shape before."

Suffice it to say, the pair didn't immediately hit it off. In fact, they parted ways before meeting again a few years later and joining forces for good.

The band, as the name suggests, is ridiculous. The England-based power metal group is perhaps best known for its minutes-long guitar solos, cheesy hair-metal melodies courtesy of frontman Marc Hudson, incorporation of the odd video game noise and fantastic lyrical subjects. Indeed, DragonForce's members stand apart from their speed-metal colleagues by never taking themselves too seriously.

Currently on a worldwide tour in support of new album Reaching Into Infinity, Li spoke to the Riverfront Times by phone ahead of DragonForce's July 14 Fubar show.

Given that Li can totally shred — seriously, look up some videos — you'd expect him to be one of those child prodigies who grew up with a toy-sized guitar in his hands. But he was something of a "bad boy," he says, and used to skip his grade school music lessons because he thought they were boring. On a whim, he picked up a six-string for the first time at sixteen.

"It was sort of a random thing, to be honest," he says. "I wanted to do something different, and I was into rock music. I thought playing the guitar looked like something fun to do, and it pretty much went from there. I never thought I wanted to be a musician, or that I would play guitar for my whole life."

He soon regretted skipping lessons and never learning the difference between, say, sharp and flat notes. "I was a clueless guy with an electric guitar," he says. But he made up for it by practicing a ton: "The first year was tough, but I kept discovering more great musicians and bands out there that inspired me to keep playing and get better at it."

In the early days of DragonForce, Li and Totman found that they complement one another as players and as bandmates. Li did most of the business and logistical stuff, from trying to get record deals to making demos and buying recording equipment. Totman wrote the songs (and still does). Stylistically, they also bonded over what became one of the band's signatures sounds —t he old-school video game bleeps Li somehow coaxes out of his guitar. And, of course, they shared the need for speed, having listened to and looked up to trash-metal bands such as Megadeath, Metallica and Slayer.

In 2005, the group's power metal single "Through the Fire and Flames" on Inhuman Rampage became an unlikely chart-topper and Internet sensation thanks to its '80s-themed music video, some unbelievable shredding and, perhaps most importantly, its placement on the mega-popular video game Guitar Hero 3. DragonForce was introduced to the masses. To this day, the song gets the strongest reactions during the band's shows around the world.

Li, for one, has become somewhat resentful.

"I've never thought that song was better than any other songs we have," Li says. "It just happened to be the right time and place — whatever is happening with trends and in the world. But I guess we're lucky. Being in the music business, being a musician, you need some luck on your side."

He speculates that, amid the less-is-more aesthetic of the grunge and nu-metal movements, not many bands were making room for extravagant guitar solos.

"It was almost like a lost art," Li says, "and we go over the top on all our albums. When 'Through the Fire and Flames' came out, people said, 'My God, this is insane. People are playing guitar solos again.'"

Also, unlike many of the band's predecessors and peers, DragonForce is fun. Though the material on Reaching Into Infinity is extremely technically oriented, their stage shows are fast, loose and wild.

"If you're recording, you're not going to put your hand way up in the air and smash it down on the guitar to make the rhythm sound," he says. "But you play differently on stage and really bring out the energy in the music. You're not going to catch DragonForce standing still on stage."

Jump to comments
« Soulard Blues Band Releases Its Eleventh Album — But Who's Counting?   |   Echo & the Bunnymen's Ian McCulloch Is an International Treasure »