Michael Brown and Ferguson: The Story in Photos

On Saturday, August 9, 2014, eighteen-year-old Michael Brown was walking with a friend on the 2900 block of Canfield Drive in Ferguson, Missouri, when the two came across a Ferguson police officer. What happened next is unclear, but after a series of gunshots, Michael Brown was lying face down in the street in a pool of blood. He was dead, shot repeatedly by officer Darren Wilson, a six-year veteran. Brown was unarmed, and many witnesses say he had his hands raised in the air at the time he was shot.

In the days following the shooting, there have been outpourings of support, sorrow, and anger from celebrities and community members alike. Many have taken to the streets of Ferguson to protest. What began as a peaceful demonstration turned increasingly violent, and the protests turned into riots. Now two others have been shot in separate incidents, and the tension surrounding Brown's death continues to permeate St. Louis and the country.

The photographs above were taken by Riverfront Times photographers and writers as well as by contributors. A number of different cameras and cell phones were used.

Bryan Sutter, Theo Welling, Tom Carlson
The cover of the August 14, 2014, edition of the Riverfront Times. 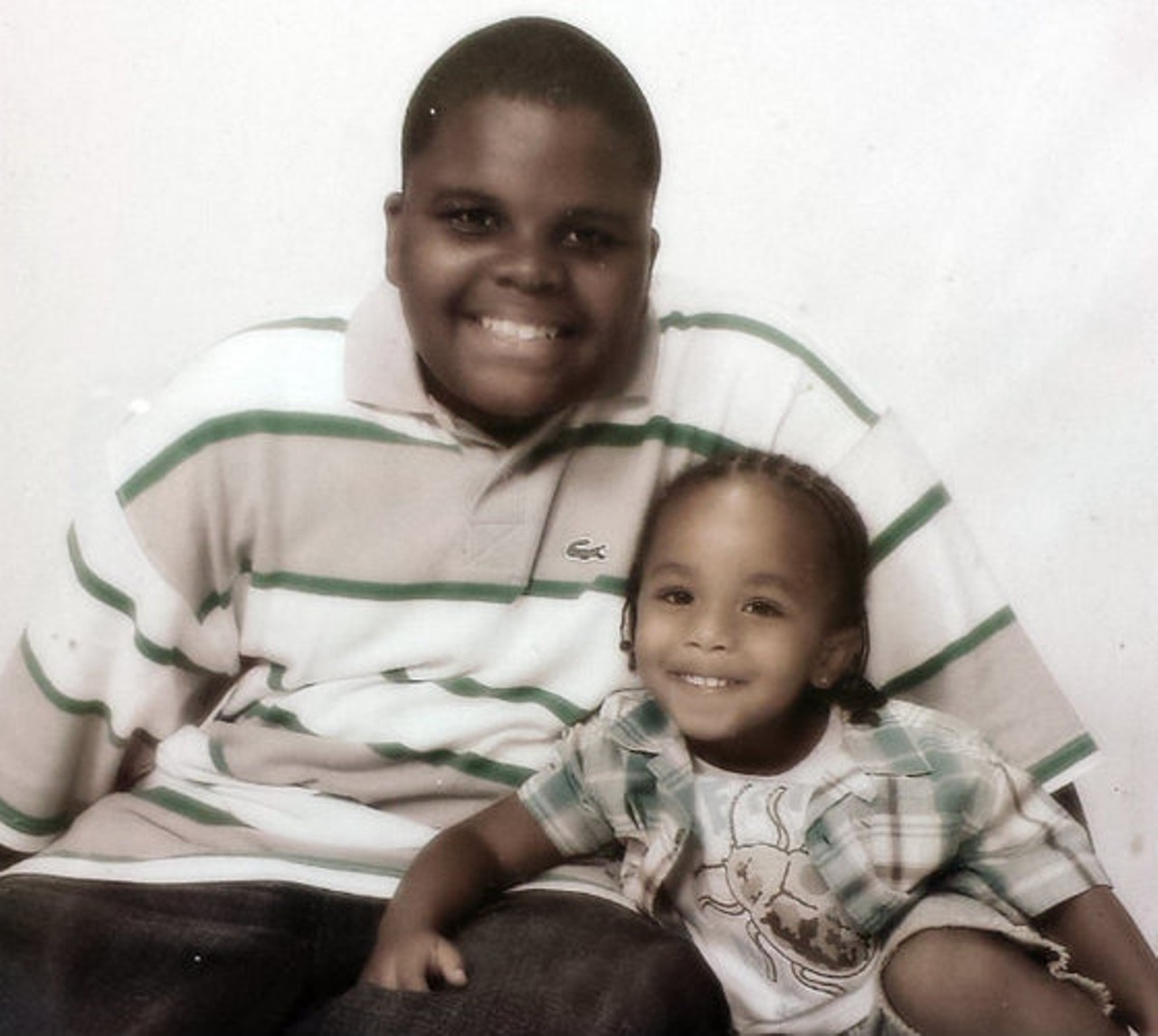 Courtesy of the family
Barely 24 hours after a Ferguson police officer shot and killed Michael Brown, his family wanted people to know that Brown was a shy, nonviolent kid who loved music and wanted to go to college. Read "Family of Michael Brown, Teenager Shot to Death By Ferguson Police, Talks About His Life."

Ray Downs
On August 10 in Ferguson, protesters held a vigil for Michael Brown. The event started out peacefully, with many people holding signs and candles as they faced hundreds of cops in riot gear. But as the night wore on, vigil candle lights gave way to smashed windows. Read "Peaceful Protest for Mike Brown Before Riot Police and Looting Takes Over." Mitch Ryals
By 9:30 a.m. August 11, with the smoke and violence of the previous night's looting and riots gone, a crowd of some 50 demonstrators arrived in front of Ferguson's police and fire departments to continue the protests over the death of Michael Brown. By 10 a.m., the crowd swelled to several hundred. Read "After Night of Looting in Ferguson, Protesters March Looking for Answers."

Danny Wicentowski
Police and SWAT forces were out in force in Ferguson on August 11, and they used armored vehicles, rubber bullets and tear gas to clear groups of protesters and pedestrians from roads, parking lots and, occasionally, residents' own backyards. Read "Police to Ferguson Bystanders: 'You Are in the Middle of a War Zone.'"

Ray Downs
On August 11, police in riot gear marched down West Florissant Avenue, ordering people to leave the area and firing tear gas onto the streets. Police even fired tear gas into the backyard of a home where several people held their "hands up" in what's become a symbol of protest over the shooting of Michael Brown. Read "Police in Ferguson Fire Tear Gas on Protesters Standing in Their Own Backyard."

Lindsay Toler
St. Louis County Police Chief Jon Belmar says he expected the FBI to join the investigation because of the "magnitude" of the shooting, which spurred violent looters to burn businesses and fire gun shots August 10 after a peaceful vigil in Brown's honor. At the podium is St. Louis County Executive Charlie Dooley, during a press conference on August 11. Read "FBI Launches Independent Investigation into Shooting Death of Michael Brown."