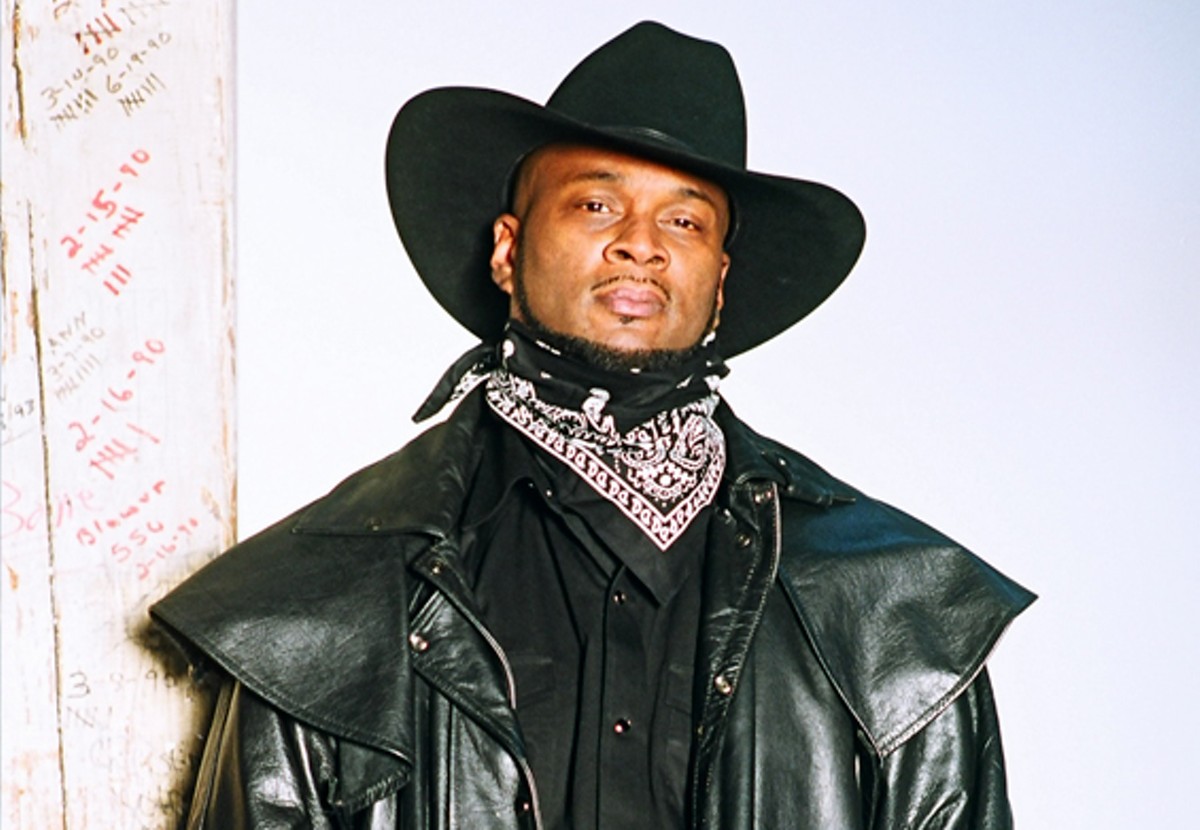 Wild Bill Young has been a fan of country music all of his life. Suzy Gorman

It's not unusual for country singer Wild Bill Young to get a few stares and glares when he's dressed up for a show. He stands at a solid six-foot-four inches tall — probably closer to six-foot-eight, including the hat and boots, and Young's stage appearance adds the urban flair of bandanas and flashy chains to the more traditional country look, giving the University City native an "outlaw" type of swagger. He likens himself more to Elvis Presley than Charley Pride. He means he doesn't just sing onstage — he likes to strut.

Like his clothes, Young's music blends certain hip-hop and soul elements with tried-and-true country storytelling. Wild Bill likes to write his own material, much of which was conceived during a short stint behind bars. His production is currently being handled by Willie Woods (who produced Nelly's hit "Ride Wit Me"), and Young's deep, booming vocals could be compared to someone like Isaac Hayes, though with a distinctive Southern twang. One shouldn't be fooled by his Nelly-like delivery on the track "I Told Y'all"; Wild Bill is a singer, not a country rapper like Cowboy Troy. That song was more of a taunt, his way of saying, "I can do what ya'll do, but can you do what I do?"

While he may seem like an oddity at first, Young is quick to point out that black entertainers have had an influence on the country scene for as long as there has been one. "I'm not nothin' new 'cause I'm black. Bill Pickett was black. He was one of the greatest rodeo acts of all time," he says. "A black man, DeFord Bailey, was the first country-music superstar ever. I'm just doing what the greats have already done before me."

Still, Young looks forward to the day when the perceived novelty of his act is no longer a factor. "I'm tired of being called a 'black' country singer. I'm just a country singer — my color doesn't matter," he says. "I'd perform for the Ku Klux Klan, 'cause I feel like if they gave me a chance, I could get them to open their minds. I've been to some of the most racist parts of the South — people saying 'nigger' when I walk in the door, Confederate flag waving and all that. But before I leave out, the same guys who were acting like that were apologizing to me. I feel like I can make a change."

Wild Bill's fearless approach to his craft partly comes from his experiences growing up on the streets. In fact, Young was known as "Wild Bill" before he ever touched a microphone. In true cowboy fashion, Young remembers spinning doughnuts and flipping off the authorities in front of the old Hanley High School at age fourteen. Despite being raised on a private street, Young disregarded the safety and security afforded to him by the suburbs and favored the intoxicating excitement of gang life. "I had a really good life at home. [My parents] didn't deserve the kind of kid I ended up being," Young says.

It wasn't until Young was in his thirties and with a child of his own that he experienced a moment of clarity. After a long night of drinking and using cocaine, Young ended up alone in his mother's basement around 4 a.m. one morning. The relative silence allowed his thoughts to focus on the direction his life had taken, and Young suddenly felt exhausted from it. Young recalls, "I was sitting there thinking my life was over. I couldn't keep a job, and I couldn't hold onto my money because of the drugs. What can I do?" A fan of country music since childhood, Young happened to be watching an old broadcast of the Grand Ole Opry when something jumped out at him. "Here's this white guy from Tennessee back in the '40s singing country, and his boxers are hanging out of his pants. He's sagging! That spoke to me. It showed me that we weren't that different. That was God sending me a message."

That's the moment when Young decided he would become a country singer, no matter how unlikely the notion was at the time. "Don't get me wrong, it was a crazy thought, now," says Young. "I never knew the first thing about singing country music. I didn't know who'd come along to help me. I had no idea how it was supposed to work, but at four o'clock in the morning, I just started writing." What Young came up with would go on to become his first single, "Next Train to Nashville," his personal anthem about turning his life around.

The journey hasn't been an easy one, and Young has run into his share of obstacles along the way. One of the biggest came in 2005, when he spent 180 days in a correctional center in Bonne Terre for failing to pay child support. While it might have been a devastating experience for some, Young turned it into a strengthening exercise for both his music and his character. Young would draw a crowd during yard time, taking song requests. "Six months I was there, and I sang every night. The whole unit would bang on the walls and on the bars until I'd start singing. The guards would get write-ups for leaving their posts to come listen; the warden started bringing his kids on Sunday — eventually they started playing it over the PA."

Not only did his time in prison teach Young how to play to a crowd, but he was treated so well on the inside that he literally shed tears when he was released. "What [my career] is building up to now, I already had in there. I was world famous in prison," Young says. More important, he left with the peace of mind that he'd found his calling. "I never again had to wonder what I'd do. I knew that I'd be doing this till the day I die."

In the time since his release, Young has recorded 21 songs, including a recently wrapped video for "Ride," although he's never released an official album. He's played shows on the local circuit, opened for the likes of Lakeside and Chuck Berry and taken his act to country music's mecca, Nashville, Tennessee. For the past couple of years, Young's career has been picking up speed thanks to a few particularly fruitful partnerships; producer Willie Woods' knowledge of the industry has been instrumental in getting Wild Bill's songs aired on country radio, and being endorsed by local developer/music aficionado Joe Edwards has opened doors for him that would otherwise be inaccessible.

Demand for Wild Bill's unconventional style seems to be at an all-time high. After winning the regional of the Texaco Country Showdown in August (putting him in the company of artists such as Carrie Underwood and Toby Keith), Young says he's in talks with multiple record labels, including Nashville-based Average Joe's Entertainment and industry juggernaut Universal Music Group. He's also in the process of shopping a reality-show pilot out to different cable networks. If it gets picked up, the show will be produced by the same team behind Welcome to Sweetie Pie's and will prominently feature local landmarks like the Delmar Loop and Shady Jack's in downtown St. Louis.

When asked about his long-term goals, Young replies with a confident grin: "I plan to be the greatest that ever did it. I'll never stop. I'll look back about three years from now, hopefully, and I'll be at the very top. Ain't nobody gonna beat me, I'll guarantee you that." 