Laclede's Landing welcomes Diablo! Café, where you can have a hot time in the old city 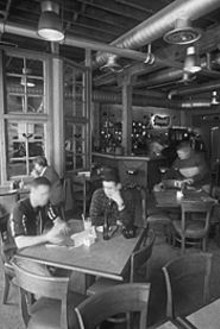 At Redneck Earl's Cowboy Takeout, in San Mateo, Calif., customers who pluck up the courage to try the hot sauce must first sign a liability waiver. Diablo! Café, on Laclede's Landing, hasn't caught wind of this marketing gimmick, but diners with a low tolerance for pain should not ingest the spiciest of the new restaurant's 30 chile sauces. We sampled a dozen or so, including "Bad Day in Baghdad" and the peculiarly named "Hot Beef Injection," a corrosive concoction that makes you feel as though you've just pitched a handful of fire ants down your gullet.

Diablo -- Spanish for "devil" -- is a concept restaurant that offers fusion-style spicy foods. "We serve anything that's not bland," an employee explained when we called to ask about the menu. "Cajun, Asian, Tex-Mex, you name it, as long as it's hot." Fiery foods, in the euphemistic parlance of the industry, are said to have a "higher flavor profile" -- higher, presumably, than the chicken fingers, cheese fries and bacon burgers that dominate menus in the casual-dining segment. A National Restaurant Association survey concluded that spicy regional and ethnic foods are most popular among baby boomers, who want to jolt their withering taste buds, and among Gen X and Y diners, who are so worldly that they do not view such foods as unconventional. Ethnic restaurants and cooking shows, such as the Food Network's Melting Pot and East Meets West, stoke the demand for piquant flavors by acquainting diners with the ingredients and preparation techniques of other cuisines, such as Caribbean and Nuevo Latino. But more noteworthy than the emergence of any particular culinary tradition, says the NRA, is diners' increasing willingness to leapfrog from one cuisine to another, even during a single meal. Diablo gives customers a chance to do just that.

Italian, Cantonese-Chinese and Mexican, the top three "ethnic" cuisines in the United States, are represented on Diablo's menu, but they are so commonplace that Americans consider them, well -- American. The restaurant also showcases Cajun, Southwestern and pan-Asian dishes. Its current menu, however, is long on chiles and short on other exotic spices and flavorings, such as jerk seasoning, berbere, miso, wasabi, nam pla, tamarind, moles and chutneys. Chef Roger Jamieson says his specials this fall will be more adventurous.

The risk of cooking incendiary dishes is that the heat will overpower the food, creating a "detrimental flavor conflict" -- more industry jargon. But at Diablo, the heat is like a fizzling sparkler, not an exploding cherry bomb. The closest thing to combustible is the signature El Diablo, a choice of grilled steak, red snapper, pork loin or chicken breast rubbed with chipotle paste (chipotle chiles are jalapeños that have been dried, smoked and packed in vinegary adobo sauce). We had a go at the snapper, which was garnished with fresh-pineapple salsa, tomato-pepper pico de gallo, minced chives and an artfully carved scallion. Another smoldering dish was a thick cream-of-tomato and roasted-yellow-pepper soup, finished with sweet cornbread croutons, crumbled goat cheese and chopped scallions. Even the unassertive flavor of pan-seared Alaskan king-crab cakes was ramped up to the boiling point with jalapeño mustard and roasted-red-pepper cream.

Some dishes on Diablo's menu seem bashful at first but know how to shake their booties. A sandwich of grilled, sliced beef tenderloin is stacked on a handmade tortilla and decked out with caramelized-onion jam and peppery Gorgonzola -- the culinary equivalent of a hairy chest and swinging gold medallions. Grilled-vegetable and wild-mushroom lasagna, made with wonton wrappers in place of pasta, is a tower of yellow squash, zucchini and eggplant layered with goat cheese, tomato sauce and béchamel. Sprinkled with toasted pumpkin seeds, the lasagna is a tarted-up version of an almost invariably dull dish.

A few items need to get their groove back. Four-cheese sun-dried-tomato pizza -- a round of crisp flatbread buried in a goopy layer of Gorgonzola, mozzarella, white-cheddar and Chihuahua cheeses -- demands the acidity of a tomato sauce to cut through the flab. A watery roasted-garlic soup with white cheddar and red chiles was served in a bowl inexplicably lined with soggy tri-colored corn chips on one side and slices of deli chicken breast on the other. In a dish of "soy-glazed shrimp," the three featherweight grilled shellfish appeared to have no glaze at all. A side dish of minty grilled-potato salad, billed as spicy, had zero heat and tasted as though it had been prepared without salt.

Diablo's hot-foods theme unwisely extends to the dessert course. The Diablo sundae, vanilla ice cream swathed in cayenne-spiked hot fudge, takes its cue from a Cayman Islands cake made with Scotch-bonnet peppers. We concluded that ice cream and chiles had best not make a date for the prom. They are no match for the likes of the "Terror of Diablo," a strata of espresso-chocolate mousse and devil's-food cake soaked in cinnamon espresso, with a smooth pane of chocolate blanketing its surface.

The so-called "homemade whipped cream" on both desserts turned out to be whipped topping from a squirt can, but we give the staff credit for having owned up to it. In fact, the whole crew seems to be good-natured, even when they're grousing about their co-workers. Overhearing the line cooks' repartee one night was like watching Politically Incorrect. ("He can't call me that, man. What would he say if I called him a cracker?"). As we left the restaurant, a few of the cooks loitering by the door asked us how we liked our meal. They fairly beamed when we gave them a sincere compliment. The dining room is in good order, too. The décor is hip and high-energy, with boldly printed fabrics, mosaic tile and a funky tentacled "Diablo!" sign above the bar.

Will robust ethnic foods be a lasting trend or a fad that will soon go the way of crockpots, blackening spices and Y2K rations? The economy might have a say in it: Diners take more risks when their wallets are fat. Hey, what's 15 bucks if you don't like the dish? But when money is tight, customers want to order something familiar. Diablo's menu, happily, is so affordable that it's no big deal when one of those detrimental flavor conflicts lands on your plate. And if you're foolhardy enough to take a crack at it, the Hot Beef Injection is on the house.

Jump to comments
Kicks and Grins »