A future-world reading of Macbeth by St. Louis Shakespeare recontextualizes a classic 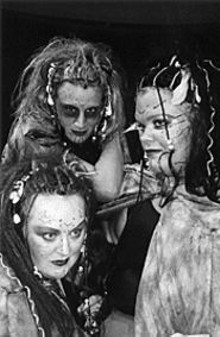 Director Milt Zoth has set St. Louis Shakespeare's production of Macbeth in a postapocalyptic near-future, a neat idea that conveys the struggle between the civilized and the primitive that the play is about. It also works great for the production design; Patrick Huber's sets and Betsy Krausnick's costumes are reminiscent of the Mad Max films. Zoth's other bold choice is to make Macbeth essentially a story of two people driven mad by guilt. Although the text makes clear that Lady Macbeth goes insane over her complicity, this production pushes the envelope on Macbeth's madness, taking him from guilty to paranoid, then driven over the edge during his second visit to the witches, a scene that's a highlight of this production. As much as the futuristic setting, it emphasizes the timelessness of this play, following Shakespeare's map of the psyche that predates Freud by 400 years.

As Lady Macbeth, Donna Northcott gives a layered, complex and compelling performance. She hits the ground running with her first speech, her ambition already controlling her; we see the wheels spinning behind every thought. She and her husband have a sensuous relationship of equals; Northcott's Lady M. doesn't so much manipulate Macbeth as inspire him. When she returns from planting the bloody daggers framing Duncan's bodyguards, it's clear that the realization of her deed has hit home and the seeds are planted for her descent into madness.

In the smaller roles, Matt Kahler brings a strong physical and emotional presence to Macduff, and Kevin Beyer is excellent as usual as both Duncan and the Doctor. But Macbeth comes down to Macbeth, and although John O'Hearn has some good moments, especially as the psycho-king unravels (along with his hair), his performance doesn't draw us in as the character needs to in the early going, making for a sometimes draggy first act. Macbeth is a military hero, someone with a commanding presence and a huge ego; it's this tragic flaw that allows him to fall for the witches' flattering prophecy. But O'Hearn never dominates. His dilemma seems nonexistent; he immediately decides to kill Duncan, wavers a bit, then is talked into it again by his wife without much resistance. When Banquo and Macbeth make their first entrance together at the top of the play, it takes a few speeches to even discern which is which; that's not a good introduction for a title character.

Zoth expands the usual three witches into an entire coven and places them throughout the play, hinting that the power of the primitive is everywhere, lying just beneath the surface of civility. In a nice bit of business, the witches direct all the corpses to the afterlife, not only adding an eerie element but solving the age-old practical problem of how to clear the stage of supposedly dead actors.

The battle scenes, using crowbars, baseball bats and daggers, seem clunky and overchoreographed. Though we're spared the cheesy severed head of Macbeth that some productions of the Scottish play inflict on us at the end, we're deprived of seeing Macbeth get his comeuppance; for some reason, his death is played offstage. It's unsatisfying, ending the evening with a skid rather than a bang. And though the witches are cleverly brought back for a brief epilogue, why don't they beckon the dead Macbeth to their world as they did his victims?

Jump to comments
« The Little Company That Can   |   American Beauty »