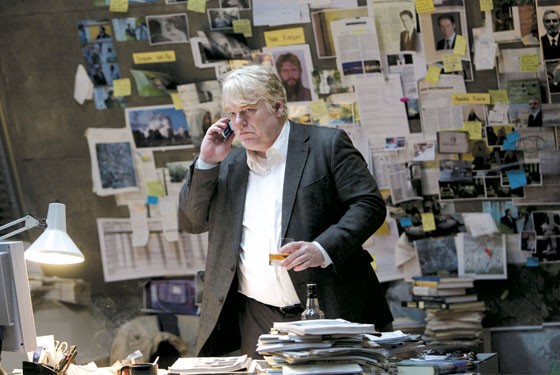 Philip Seymour Hoffman in A Most Wanted Man.

Philip Seymour Hoffman is an island of rumpled calm in Anton Corbijn's urgent A Most Wanted Man, a glum-out-of-principle espionage story based on a John Le Carré novel. The role demands that Hoffman be quiet, steady, occasionally frustrated, and that he hold secrets — often from us, which is a bit of a shame. This is the last film that Hoffman completed, and other than a few humane flourishes — a bleat of anger, a playful wave to a video monitor showing a prisoner flipping him off — he's a poker-faced riddle. It's our job as viewers to wonder whether he's a hero, a monster or that intersection of the Venn diagram, where those possibilities overlap.

As you watch, teasing out the character's mysteries, it's impossible not also to worry about the actor's. Hoffman's whiskery, unknowable Günther Bachmann is the leader of an encouragingly humane street-level counterterrorism squad in a stylishly miserable Hamburg, where it's always just finished raining. He seems a miserable slump, with no home life to speak of, with only his work to throw himself into, with his soul ground down between conflicting forces beyond his control. Knowing that this is the last full creation of this most restless and gifted of actors makes the character's alienation all the more moving: Like Hoffman, Bachmann proves masterful at his craft but still faces terrible disappointments.

"I head an anti-terror unit that not many people know about and even less like," Bachmann says, his voice a froggy rumble. (Hoffman has sleeved that purr of his in a thick, Teutonic accent.) The people who don't like him — and just barely tolerate his methods — include the German government, which prefers to kick down doors and indiscriminately arrest suspects, and the Americans, who keep insisting they're done with the black-hoods-and-extradition routine. Bachmann favors extraordinary measures to determine whether suspected terrorists are actually guilty. He'll let low-level bad guys roam his port city until they lead him to the bigger threats. But since Mohamed Atta planned the September 11 attacks in Hamburg, both countries' intelligence arms are forever monkeying in Bachmann's business.

The case that wears Bachmann down for most of A Most Wanted Man starts small. Issa Karpov (Grigoriy Dobrygin), a young Muslim man from Chechnya, enters Hamburg illegally with no identification except a letter entitling him to millions from an international bank. The money is an inheritance of sort from Karpov's father, a murderous Russian gangster. Bachmann wants to trail Karpov to see whom he associates with and what he plans to do with the money — might he use it to fund terrorism? An idealistic immigration lawyer played by Rachel McAdams takes up Karpov's case, and a banker played by Willem Dafoe faces pressure from Bachmann to wear a wire and string Karpov along.

Hoffman's scenes with Dafoe are wonderfully tense — here are two actors known for holding things in and then exploding, playing powerful men manipulating one another. Who will blow first? There's little violence or movie-style action here, but director Corbijn suggests in each moment that something could go very wrong. Like his last film, The American, A Most Wanted Man proceeds with deliberate care, but this time nothing feels slow or pretentious. The American was like the cover story of some men's adventure magazine told in art-house slo-mo; A Most Wanted Man is simply a complex tale superbly told, with time for nuance and to soak in its mysteries.

There's also time to soak in Hamburg. Much of the movie takes place on its streets, trains and ferries, with detours into its grubbier diners and thumping-est clubs. Outside, there's always some silhouetted bridge in the background, grand and grimy, and some rush of out-of-control traffic. The effect is both gorgeous and nerve-jangling: Corbijn's Hamburg is like Europe's steel-and-concrete nerve center, and the movie never lets you forget how easily an act of terror planned there could bring down the world outside.

The opening shot, of waves lapping against a concrete wall, starts sensuously and turns hauntingly sinister: Karpov hauls himself up out of the drink and into the city, a desperate man either fleeing horrors back home or committed to creating new ones here. Dobrygin's performance, like Hoffman's, is directed inside — he's cagey, too, but everyone's refusal to state directly their intentions isn't just a trick to gin up suspense. These men are knotted up: We can tell Karpov's scared, we can tell he's devout, we can tell he has some un-devout hots for McAdams's lawyer. Bachmann makes it his mission to find out what's happening inside Karpov, and by the end, Corbijn and screenwriter Andrew Bovell have laid bare all of these unknowable men. The answers satisfy — sometimes they're even heartening. But you know all along that this story can't arrive at a happy ending. It's a credit to the craft of everyone involved that that end still satisfies so deeply. 

A Most Wanted Man is not showing in any theaters in the area.