Will the real Lavell Webb please stand up? 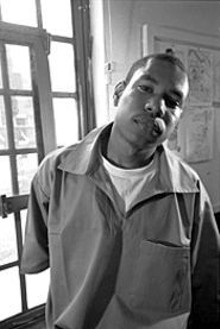 LaShanda Richardson thought she had met someone special when she and a guy named Lavell Webb struck up a conversation outside a house in north St. Louis. A Kansas City native, the 21-year-old Richardson was visiting from Fulton, where she attends William Woods College. "He seemed like a really nice guy," she recalls. They spent the next three days together in St. Louis, and then she invited him back to Fulton.

Webb sported two tattoos on his arm. One read "Natural Born Killer"; the other, "St. Lunatics." Richardson asked Webb whether he knew members of the St. Lunatics, the famed St. Louis rap group consisting of Nelly, Murphy Lee, Ali, Kyjuan, Slo Down and City Spud. He was coy, she says, and replied with an ambiguous "maybe."

During the two days the pair spent together in Fulton, Webb continued dropping subtle hints about his connection to the platinum-selling rap group. Then he mentioned that he knew Murphy Lee. "I'm like, 'How do you know Murphy Lee?'" she says. Then he confessed: "'I'm City Spud.'" She wasn't familiar with the name, so he explained: He, City Spud, was a member of the St. Lunatics.

Richardson could be forgiven for not recognizing the name. City Spud is the unknown member of the group, and for good reason: In 2000 Lavell Webb, a.k.a. City Spud, was sentenced to ten years for first-degree assault and armed criminal action and sent to the Boonville Correctional Center right before Nelly's debut, Country Grammar, exploded onto the Billboard charts. (For more, see Randall Roberts' "Bad Rap" in the August 8, 2001, issue of the Riverfront Times.)

Webb had produced four tracks for Country Grammar and rapped on another. If you've heard Nelly's "Ride Wit Me," you've heard Spud. He's the one whose rap starts: "Now that I'm a fly guy, and I fly high/Niggaz wanna know why, why I fly by." That hit song, and the production credit on the multiplatinum album, have earned Webb hundreds of thousands of dollars in royalties.

He told Richardson that he'd been released in December of last year after his conviction had been successfully appealed. He'd just received his royalty check, he said, and flashed a folded-up piece of paper. He said he had to get back to St. Louis to get a driver's license, and then he'd be able to cash the check. They returned to St. Louis, where she loaned him $40. Directing Richardson to what he said was a friend's house, he went inside. After a few minutes, he returned. He kept avoiding the subject of getting the driver's license. Over the course of the rest of the day, he borrowed more money, as well as her cell phone.

At midnight, though, she pulled into a gas station, fed up. "I had no money, no gas, and I look at him and I'm like, 'Just be honest: You don't have my money, do you?' Then he flipped out, started cussing me. I turn the wheel to leave and he snatches my arm back. He was trying to stop me from going. I'm like, 'Okay, I need to get out of this car.'" He got so heated, Richardson says, that passers-by approached the car and told him to back off. Finally he handed her four dollars and left.

She turned to the police. "I said, 'Hey, Lavell Webb robbed me.' They're like, 'Lavell Webb is in jail.' I'm like, 'No he's not. He just robbed me.' And that's when I found out that the real City Spud is still in jail."

Richardson never did get her phone back, but when she contacted her wireless carrier, they provided a list of phone numbers the impersonator had called. Then she started dialing. She reached one woman, she says, and then a second, both of whom told her they'd had similar experiences with the faux Spud.

One of those women consented to be interviewed for this story. She says the man who has been roaming around St. Louis conning women under the guise of City Spud is Antonio Bell -- she knows because she saw his driver's license. "I seen his ID first, and then he told me that that wasn't his real name, and I asked him his real name and he said Lavell Webb." The woman, who asked that her name not be published for fear of retribution from Bell, says she has spoken to at least three other women victimized in the same fashion, one of whom was bilked for thousands of dollars. "He started mailing her letters and sent her a picture," the woman explains. "He was talking to her for about two years, and she was sending him money and everything.

"He's scary," the woman goes on. "He'll act like he's trying to kill you or something. He'll come over to your house and he won't leave, and when you try to get him out of the house, he'll act like he's going to do something to you." One of the women Richardson contacted told her that a man named Antonio Bell served prison time with Lavell Webb at Boonville. According to the Missouri Department of Corrections, Webb will not be eligible for parole until 2008. (Webb, who now resides at the South Central Correctional Facility at Licking, Missouri, did not return repeated phone calls seeking comment for this story.) Bell, who goes by the nickname "Blue," started calling another woman, Michelle Smith, while he was still locked up at Boonville. Even then he claimed to be City Spud. He came to visit her about three months ago. He stayed at her house and got really drunk, she says.

John Fougere, public information officer for the Missouri Department of Corrections, says there are five different Antonio Bells in the department database but confirms that an Antonio Bell of St. Louis, born December 21, 1978, was incarcerated at Boonville at the same time as Lavell Webb and was released on parole on December 24, 2003.

Richardson says the impostor bears a faint resemblance to the real Lavell Webb, based on photos she has seen of the rapper. "I'm trying to compare that with what he looked like, and I was like, okay, could this be him?" she says. "He's got brown skin. What really stood out was his lips. He has very full lips and sleepy brown eyes. He fits the mold of what City Spud could look like. He could pass for him."

Richardson has opted not to file a police report. "It was only $200, and the Sprint phone," she says. Another victim called the county police department as well, but decided against filing a police report. One Berkeley resident has filed a police report in connection with Antonio Bell. On April 10, 2004, Bell was arrested at 8705 Harold Avenue for destruction of property and giving false or misleading statements to police.

Berkeley police chief Robert Jenne says that when Bell was arrested, he used a false name. "At the time of the arrest, the individual did use a different name other than his legal name," Jenne says. That charge, a misdemeanor, has yet to go to trial, and Bell remains free. He continues to use Lavell Webb's name, and Lavell Webb's story.