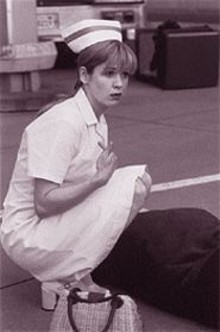 Humans and their stories, my oh my. Somehow the familiar themes just keep coming around, again and again, ad infinitum. Of course, most of them have already been captured and processed by Shakespeare. From the bitter young man to the crazy old king, from the flirty young thing to the malicious old crone, we're well covered with the Bard. What's nice is when a story comes along that, were he alive in blue jeans and a baseball cap, Bill would surely steal and rewrite. It sounds crazy to say this of a Neil LaBute movie, considering the dubious auteur's semipathetic thumping of his own hollow chest, but Nurse Betty moves like a classic. Unlike In the Company of Men (which touched a few nerves) and even less like Your Friends and Neighbors (which anesthetized them; wow, people unhappily copulate -- how interesting, Neil!), LaBute has wisely ditched his own choppy bombast in favor of a crackling script by John C. Richards and James Flamberg, to the benefit of all concerned. The resulting piece resonates on the American condition, deliciously detailing the whimsy, violence, intolerance and shallow fantasies that fuel this nation. Oh yeah, and it's funny.

Our heroine here is a wispy blonde named Betty (Renée Zellweger) who deftly pours coffee at the Tip Top Cafe, somewhere in the sticks of Kansas. Because Betty is obsessed with her own version of Oz -- in this case, a cheesy LA soap opera called A Reason to Love -- she's in dire need of an exploration of her own "Dorothy" side. In her mind, she's already off to meet the wizard of love, the show's Dr. David Ravell, a sexy heartthrob played by a mediocre actor called George McCord (Greg Kinnear). Betty's world is tiresome and hopelessly lacking in inspiration, as is aptly summed up by her birthday "celebration," which consists of a cupcake with a candle in it; a photo shoot with a cardboard cutout of Dr. Ravell (purchased by a co-worker "on the goddamned Internet, where else?"); a blow-off from her best friend, Sue Ann (Kathleen Wilhoite); and thinly veiled insults from her husband's secretary, Joyce (Sheila Kelley), whom her husband has been sloppily shtupping. Ironically, her wretched spouse, Del (LaBute regular Aaron Eckhart) summons the tornado that ends up whisking Betty away. A sleazy car salesman (and typically facile portrait of the American white male), Del is the antithesis of his beleaguered wife's television hero, explaining that "these actors are mainly models ... which are mainly faggots ... and the rest are assholes." Poignantly, he punctuates his decree by munching Betty's cupcake ... uh, literally.

But the storm is already on its way, in the form of Charlie (Morgan Freeman) and Wesley (Chris Rock), two outsiders who have blown into town with a mysterious motive and attitude to burn. (When Betty waits on them, asking Wesley whether he's sure his greasy eats are a good choice, he shoots back, "You sure you want a tip when I'm done?") Clearly a master and ward, Charlie soon approaches Del with a stealthy resolve and a score to settle, but Wesley, a seething definition of the word "uppity," is much less patient, catalyzing one of the two gratuitously ugly segments that bookend the movie. Quick as a flash, effeminate investigative reporter Roy (Crispin Glover) and domineering Sheriff Ballard (Pruitt Taylor Vince) are on the case, but Betty has already blocked the grisly experience from her memory and swiped one of her husband's cars to head west. Her mission: Find her true love at the mythical Loma Vista Hospital in Los Angeles.

Because there's a clever hook in nearly every scene, it would spoil far too much to reveal more of the plot, except to suggest that the writers were clearly influenced by both Thelma & Louise and The King of Comedy, the former for feminist empowerment, the latter for delusional playacting. (There's quite a bit of Soapdish in here as well.) But those movies only hint at the charm of this quirky and astute adventure, which actually bears a closer resemblance, in tone and gratification, to Terry Gilliam's The Fisher King (a movie that the luminous Roger Ebert, in his infinite wisdom, dismissed as noisy and incomprehensible). Because Nurse Betty's politics are reasonable (except for the repulsive whitey and a vicious Latino gangbanger -- and even these entities are certainly not unknown in this land), it sidesteps the aftertaste of doom that plagues many a tale of purloined "empowerment" or oblivious delirium. We visit the Grand Canyon here, but the director doesn't glorify it excessively or kill anybody in it, or force anyone to lose their mind among the madding egos of the television soundstage ... at least, not for long. In this sense, LaBute, like Gilliam, has a much more balanced approach to our national ennui and insanity than Ridley Scott (Thelma) or Lawrence Kasdan (Grand Canyon) could offer a few years ago. (Also, unlike our hero Forrest Gump, Betty is not a moron.) Whereas The Fisher King wore its mythic subtext on its sleeve (a bow to screenwriter Richard LaGravenese for that), Nurse Betty couches its archetypes in everyday conventions, which are likely to render it quite the accessible crowd-pleaser. There's a wealth of relatable material at hand, especially as the fantasies of Betty and Charlie lead them, pari passu, toward their intermingled destiny.

Writing a good screenplay is not difficult; you just follow the paradigm, available for a pittance at fine bookstores everywhere. But writing a great script -- especially an unpretentious and perceptive one -- requires the sort of energy that earned co-writers Richards and Flamberg the Best Screenplay award at Cannes for Nurse Betty. Not only is the material at once subtly and outrageously funny (as when Pruitt, as the sheriff, mutters, "I'm the law ... I don't gotta do nothin'!"), it is drenched in tiny grace notes that make even this preposterous journey seem real. Witness, for example, the Midwestern baby factory that is Betty's best friend, or Del's vulgar references to local "Injuns," or Betty's supervisor in LA, who jokes at the confused woman's glowing appraisal of the nonexistent hospital, "You just described all of Southern California." A lot of movies cough up their best material in the first 10 minutes, then decay for another 90. Here, we're about halfway into the movie before an LA confidante -- a woman named Rosa (Tia Texada) who'd make Frida Kahlo seem bubbly by comparison -- mocks Betty's "stupid white soap opera." If LaBute has a gift, it's to keep the punches from being pulled.

Another reason Nurse Betty is so much more satisfying than In the Company of Men or Your Friends and Neighbors is that it lacks LaBute's trademark queasy, almost confessional tone. Stewing in their own juices (women are "meat and gristle and hatred, just simmering," and love is, yawn, "a disease"), those films were provocative without being productive, oozing with cheap, rushed infatuation on one hand and playing cutesy and mean on the other. Men at least wrapped up with an interesting sense of agony, but Friends was mostly a cranky puppet show, and it made LaBute seem about as generous and sexy as Woody Allen. Here, enhanced by some perfectly focused set design from Charles Breen (right down to the woman-and-wolf image on Rosa's refrigerator), the characters are fleshed out as people rather than just warring ideologies. When Charlie and Wesley are stalled on the road, the younger man shouts, "I will shoot that bitch like she scratched my car!" but this time the misogyny seems like a scar on the soul, not a festival of loathing.

If LaBute has a second gift, it's selecting and directing fine actors, and even Eckhart (who had to work a lot harder recently to play a noncaricature in John Duigan's Molly) avoids merely punching the clock. Rock is extremely funny, ladling his venom on whoever is available, calling Freeman "Bojangles" and (in the movie's most implausible scene), spewing his adolescent theories of murder all over Betty's saltine-cracker grandparents in their sitting room. As with most of the characters here, he feels like an open wound seeking a balm, which makes the curses and conflicts all the more amusing and touching. The exchanges between Zellweger and Kinnear also pack the most ticklish sort of discomfort, as she courts her dream man with unflinching sincerity, just as Freeman loses his sense of gravity to swoon for her. Ultimately, the ending of Nurse Betty is absurd, but, because happiness is revealed along the way to be a very complex arrangement, it avoids being pat. One feels the hope in the trenches when Rosa consoles Betty, "I just want you to get your fairytale ending. At least one of us should." It may be a while before someone transcribes Nurse Betty into rhyming couplets, but the movie is brave enough to allow its intrepid heroine to jettison our national cynicism and pessimism somewhere along Route 66. That, in itself, makes it a story worth remembering.