Under The Syringa Tree, change, though painful, is possible 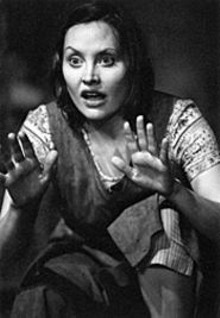 Reddish-stone walls surround the audience. The stage is covered with rocks, and a lone wooden swing hangs by sturdy ropes. African music plays. As the lights come up, actress Shannon Koob is soaring toward us, stomach-down, on the swing. This breathtaking image is only the beginning of the spectacular storytelling that is The Syringa Tree. The earthy colors and textures of the set and costume pieces place us clearly in a natural environment of beauty, danger and imagination. The realistic lighting and sound effects carry us crisply through time and location changes. The artistic support of designers Elizabeth Eisloeffel (costumes), James Sale (lights) and Chuck Hatcher (sound) contribute mightily to the show's success.

Produced in the appropriately intimate Studio Theatre, the Repertory Theatre of St. Louis' production of Pamela Gien's autobiographical script successfully melds the theatrical elements of story, acting and design to create a powerful production that is both captivating and relevant.

Playwright Gien employs the ancient art of storytelling, having one actress play all the parts in this epic tale. The play's central character is a white South African girl named Lizzie. We first meet her as a six-year-old, in 1963, when apartheid still had a chokehold on South Africa. While Lizzie's parents and grandparents battle racism in their own ways, Lizzie develops loving relationships with their black servants, particularly her nanny, Salamina. The play shows both the typical relationships between parents and children (regardless of color) and the specific details of South Africa in the '60s, where beautiful trees provide not only shade but nighttime hiding places for people who don't have the right "papers." Salamina's daughter, Moliseng, plays a pivotal role as the story moves into the anti-apartheid protests of the '70s. As an adult, Lizzie runs away from turbulent South Africa to America, "home of the free and the brave," but returns in present-day times for a heartbreaking reunion with the elderly Salamina.

Gien's evocative play requires an actress with great physical and vocal range, as well as stamina. The Rep's production has two actresses alternating in the roles: Stephanie Cozart and Shannon Koob. Koob performed on the day I saw the show and was simply stunning. Each character was unique in body and voice, from the upturned big toe of the elderly African male servant to the prim but powerful posture of Lizzie's mother. Don't worry that you'll be confused about which character is talking or what their relationships are -- director Michael Evan Haney and Koob have created crystal-clear transitions that tell the story precisely and illustrate the complexity of each character. Koob's dancelike performance is clearly choreographed and flawlessly executed, making conversations between characters and transitions between time and place completely understandable.

One of the central tensions of the play is whether human beings can really learn and change. Lizzie leaves Africa because she thinks it can never change; her parents stay and rejoice in the post-apartheid policies of freedom. Gien shows that change can happen -- it's painful but possible. Change happens not in the grand gestures of politicians but in the everyday individual decisions of ordinary people.

The theatrical metaphor of one woman playing 28 characters illustrates this human potential for growth. The audience shares in the responsibility of creating the story: We must imagine the tree, fill in the details of character and scene. In doing so, we join in the creative process, more deeply sharing in the joys and sorrows of the characters. For what seems like a short span of a hundred minutes, we return to the innocence of childhood, the sparkle of a fire on a dark night. We feel the sharp cut of fear, see the looming evil of the world. We swing free of the earth, then return to our dusty home. This is theater of the mind and heart, which blooms in the space between actor and audience. Salamina teaches us, "We are all part of the earth." In planning their season, surely the Rep had no idea how relevant that message would be today.

Jump to comments
Lure of a Thriller »