At Pangea, a Talented Young Chef Soars in St. Charles

When Jessie Gilroy told her parents she wanted to go to culinary school, they balked, insisting that she go to college for a four-year degree. Her response? She hopped on a plane to Hawaii to study marine biology.

Anyone who has had the good fortune of eating Gilroy's food over the last few years knows how well that career path worked out for her. She lasted only about a year in the marine-biology program before switching majors to hospitality management. After that, she dropped out of college altogether to soak in the island life and focus on what she knew all along was her true calling: food.

The pursuit led her to Miami, where she enrolled in culinary school at Le Cordon Bleu and immersed herself in Latin American food culture. After graduating, she returned to St. Louis where she worked at Charlie Gitto's on the Hill and the Tavern Kitchen and Bar before landing at Kevin Nashan's Peacemaker and, ultimately, his acclaimed Sidney Street Cafe.

When Gilroy announced last year that she was leaving Nashan's James Beard Award-winning kitchen to open a restaurant in the New Town area of St. Charles, she may as well have said she was traversing the Pacific again, not just crossing the Missouri River. The sleepy St. Charles community is where you go to raise kids, not make your name as a rising star chef. To call it an odd choice is an understatement.

That perception wasn't lost on Gilroy, who herself didn't know much about New Town before opening Pangea. She'd never even been to the planned community before she went to look at the building, lured by an offer she could not refuse. Some friends of her father had purchased the two-story structure and were looking to fill the space that previously held Cornerstone Café with a new venture. Knowing Gilroy was a talented chef, they virtually gifted the space to her. Though she had no immediate plans to leave Sidney Street, it was an opportunity she simply could not let pass.

No stranger to packing up and moving across bodies of water, Gilroy decided to double down on New Town, moving there and immersing herself in the community that would house her debut restaurant. As she got to know the neighbors, she began to understand the balance she would have to strike at Pangea, cooking innovative food while still keeping it accessible. Pangea would indeed be creative and refined, but it would not be Sidney Street West.

That balance defines Pangea. Gilroy has put together a menu of creative comfort food designed to appeal as much to a couple on date night as a family looking to grab a casual dinner. The setting captures this broad appeal, with a large, light-filled dining room that feels both new and old at the same time, like a newly constructed townhouse in the middle of Soulard. The restaurant is painted light green and decorated with modern artwork. Soaring ceilings and large windows on two sides make the room feel bright and airy and allow light to bounce off the glassware on the tables. A large bar takes up one wall of the room; the rest is filled with wooden tables and chairs. 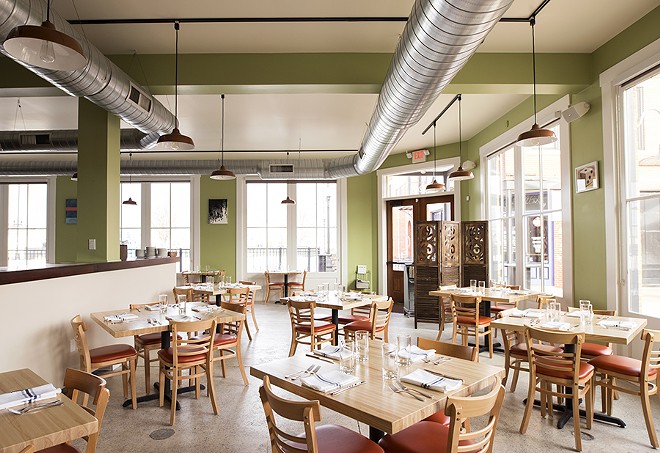 If Pangea is the sort of place where heels are as appropriate as sneakers, it makes sense that the menu is a spectrum of dishes that both nudges less-than-adventurous diners out of their comfort zones and gives them a safety net. No matter which route you choose, however, you'll be greeted with beautifully executed food.

Take, for example, the ricotta gnudi, a bowl of perfectly seared, pillow-like cheese dumplings accented with squash, leeks and brown butter whose nutty flavor underscores the toastiness of the dumpling's exterior.

A bone-marrow tart could quickly become overly decadent, but Gilroy's version reads like a delicate quiche. The marrow- and cheese-infused custard filling is encased in buttery pie crust, then finished with rosemary, preserved lemon and tomato jam. It's one of those dishes that may require an initial nudge for a hesitant diner, but it ends up being an approachable crowd pleaser.

But the biggest crowd pleaser among Pangea's appetizers are the "New Town Skins," a luxe riff on potato skins that replaces the freezer-burned potato boats that are the staples of mediocre sports bars with tender fingerling potatoes. Gilroy smothers the fingerlings in funky raclette cheese, green onions, housemade sour cream and hunks of spicy pork, which stand in for bacon bits. These alone are worth the drive from Benton Park to the 'burbs.

There was a bit of a salt problem on both of my visits, most notably in the French onion soup. It's a dish that would have been outstanding — a thick, beefy bowl of caramelized onions and molten cheese — were it not over-seasoned. The rub on the coffee-crusted pork was equally salty, a factor exacerbated by the spicy Thai curry sauce. With the seasoning toned down, it would be a fun fusion dish.

Pangea's bestseller, according to Gilroy, is the beef cheeks entree, a plate that might sound quizzical to the unfamiliar diner but is actually no different from a good old-fashioned pot roast. Sitting in a deeply savory gravy, the succulent meat is almost spreadable. Creamy polenta soaks up the jus, and mustard cream sauce adds just a punch of tartness that cuts through the decadence.

If the fried-chicken craze of a few years ago is over, Gilroy does her best to resurrect it with her jerk-seasoned fried bird. The meat is marinated in the spicy seasoning and cooked sous vide so that every morsel is infused with flavor. Gilroy then rubs it in even more jerk seasoning before finishing it in flour and buttermilk and throwing it into the fryer. The result is a multi-layered chicken that has quite the kick until it is toned down with verdant cilantro-lime crema. A few black beans finish a plate that is a beautiful hybrid of Southern comfort fare and Caribbean cuisine.

I'd call it my favorite dish at Pangea, were it not for Gilroy's dazzling duck grilled cheese, a sandwich so perfect I'd almost consider packing my bags and moving into the apartments above the restaurant. Pieces of tender, pull-apart duck confit are enveloped in gooey raclette; the funky cheese plays off the duck's rich flavor, creating an impossibly rich, almost fondue-like experience. The heavenly concoction is garnished with peppery arugula and sweet tomato jam to balance out the decadence, then stuffed between two slices of buttery, griddled bread. We're just a month into 2018, but this is a safe bet for sandwich of the year.

Gilroy offers a few rotating desserts, including a warmly spiced chocolate budino (like a grown-up chocolate pudding) and apple pie served in a Mason jar, which was tasty although it would have been better warmed. Though I'd finished nearly all of my main courses, saving room for sweets was never a problem; portions at Pangea are on the smaller side. Well, let's clarify. They are on the smaller side if you are used to the hefty platters that typify the big-box American dining experience; they are indeed closer to the appropriate size for what we should be eating.

Gilroy has taken pains to strike the right balance between innovation and approachability with her food, and to that end she has succeeded. However, I worry that portion and price could be a sticking point. Charging $21 for a duck grilled cheese is certainly fair, especially in light of how delicious it is, but selling that idea to a family more inclined to go down the street to Gingham's for a $10.49 half-chicken might be a battle.

If so, that's a shame, because Pangea is a delightful addition to the area's dining scene, one that showcases just how right Gilroy was when she decided to follow her passion for cooking halfway across the world. Is it too much to ask for us to follow her across the river — and for those who are already there to give her a chance? She's making a great case that we should.