Party on the Fringe 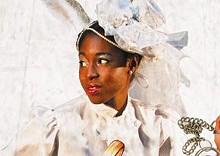 The St. Lou Fringe Festival won't open until June 18, but that's not so far away now. It's even closer than you think, as the St. Lou Fringe starts the countdown at 8:30 p.m. tonight with Five-Fifths: Alice in Fringeland. This performance/party/announcement features five different performing arts companies each telling a fifth of the story of Alice in Wonderland in their own fashion. Participants include Ashleyliane Dance Company, First Time Puppet Theater and the Kiss 'n Tells, with Siren presiding as host for the evening. In addition to the show, this year's Fringe performers will be officially announced tonight, followed by an after-party with signature cocktails at the cash bar and musical performances by The Glass Cavalry, Grave and Asimov. Five-Fifths takes place at the Kranzberg Center for the Arts (501 North Grand Boulevard; www.stlfringe.com), with the after-party starting at 10 p.m. Tickets are $10 to $35.
Fri., March 21, 8:30 p.m., 2014

Jump to comments
« Drenched in the Moment   |   Sweet Sailors »