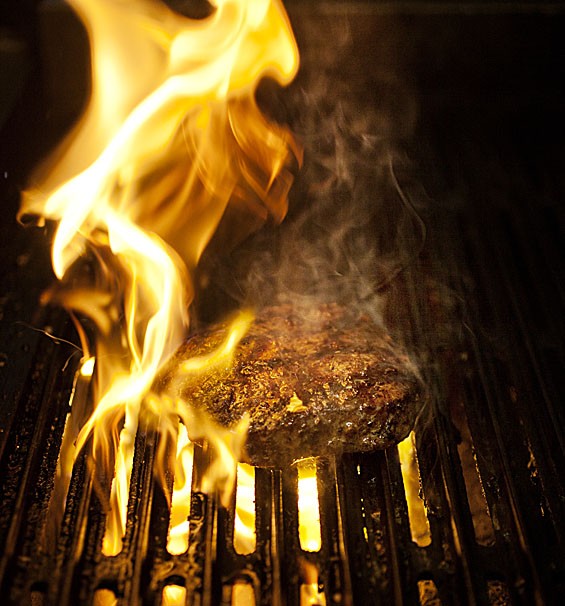 If you still doubt the impact of the so-called "better burger" boom, look no further than the recent marketing campaigns of the very fast-food goliaths that this new generation of burger joints wants to better. Burger King bowed its "California Whopper" with artsy, vaguely pornographic close-ups of ingredients being washed and prepared, while Wendy's introduced "Dave's Hot 'n Juicy," a burger whose every last component has been calibrated to be "better" via the sort of scientific precision that we used to associate with manned space missions.

Is there a Five Guys Burgers and Fries in your neighborhood yet? No? Wait five minutes. According to an August report from Technomic, the ten fastest-growing "limited-service" (to employ the industry's artless term) burger chains increased their total number of locations by nearly 50 percent from 2009 to 2010.

That figure includes Denver, Colorado-based Smashburger, which opened its first St. Louis-area location this past summer in a St. Charles strip mall. It is a very sleek operation, heavily branded: The words smash, savor and sizzle cover walls and windows. In total, the look is modern and a little cold, vaguely reminiscent of Chipotle Mexican Grill.

As its name suggests, the restaurant smashes its burgers, made from ground Angus beef, on a flattop grill. The result is a thin patty with lacy edges à la Steak 'n Shake. You can't cook such a burger to any temperature but well done, so the flavor is predominantly a product of the exterior char. The bun is soft, a touch sweet and sturdy.

Smashburger turns out a decent example of the genus Patty petilus. The flavor is recognizably beefy, the texture firm and — for a well-done burger, anyway — juicy. You can top your flat Angus as you like, choosing from a broad selection of cheeses, sauces and extras including bacon, fried pickles and a fried egg.

There are also a few trademark combos, such as the "Spicy Baja," which features pepper jack cheese, guacamole, raw jalapeño slices, lettuce, tomato, red onion and chipotle mayo. The toppings are very fresh (though the tomatoes are predictably flavorless), but with a burger of this size and doneness, the more you pile onto it, the less beefy it becomes.

Smashburger's French fries are thin and crisp and demand a dash or two of salt. Much better to opt for "Smashfries" — those same fries tossed with olive oil, rosemary and garlic.

Whether Smashburger will prove popular enough to rival Five Guys' explosive growth in the area remains to be seen. I suspect it will. (For the record, I give the edge to Five Guys. Their burgers seem a little more decadent, i.e., fattier.)

The "better burger" boom isn't confined to the major national chains. In addition to Smashburger, three much smaller "better burger" operations, two of them locally based, have opened in the area in the past few months.

When they opened the first Jim Hanifan's It's a Better Burger this past spring in St. Peters, the former football Cardinals head coach and his two partners made the concept part of their restaurant's very name. (A second location arrived in Chesterfield in September.) Photos of Hanifan from all phases of his long career — which included a stint as offensive-line coach for the Rams — adorn the dining room's red walls, and a lengthy bio, cribbed from Wikipedia and mounted on a Lucite stand, is placed on each table. Still, the space lacks personality.

The burgers are slabs of ground beef (one-third or one-half pound, take your pick) cooked well done. You can add cheese or bacon, and there is a fixings bar outfitted with the usual condiments, but the It's a Better Burger burger is all about the meat. And it's tedious work, actually, making your way through so much underseasoned ground beef, which retains just enough of its juices to avoid being mistaken for a sawdust puck.

The French fries are crinkle-cut and bland. The onion rings are better, if only relative to those fries.

Aside from the absence of Hanifanabilia, Christy's Hamburgers on Manchester Road in Winchester is essentially an It's a Better Burger by another name: no-frills dining room; bright-red walls; no-surprises fixings bar; thick patty cooked to within an inch of its structural integrity. The signature burger at this, the second area location (the first is in St. Peters) of a very small chain based in Starkville, Mississippi, is the half-pound "Big Christy." You can, if you prefer, opt for smaller (a quarter-pound), bigger (a full pound) or blood-vessel-bursting (a pound and a half). The "Big Christy" is juicier than its It's a Better Burger counterpart, but not particularly distinctive. The fixings bar sported pale tomatoes and some truly dire lettuce.

The French fries are crinkle-cut and bland — and there aren't any onion rings to substitute.

The burgers at Dave & Tony's Premium Burger Joint are neither the flattened patties of Smashburger nor the meat blocks of It's a Better Burger and Christy's. They are, for me at least, exactly the right thickness: substantial enough that the beef flavor stands out above the char, but not forbiddingly massive. Vitally, here you can order your burger at the temperature of your preference, from medium-rare to well-done.

The Dave and Tony of the restaurant's name are Dave Miller and Anthony Dahl. The two men formerly owned Sammy Scott's Sandwiches & More in this location but closed that fast-casual restaurant earlier this year and retooled it as a burger joint. With its slick logo, flat-screen TV menus and bright, casual décor, Dave & Tony's looks primed for franchising.

You order your burger by filling out a step-by-step checklist and handing it to the cashier. A reader has informed me that this method is nearly identical to that employed by a popular "better burger" joint in Atlanta; then again, it ain't rocket science. Dave & Tony's checklist contains a dizzying array of choices: buns, cheeses, toppings both typical and un- (avocado, hard-boiled egg, baked beans...) and sauces.

It's impossible to evaluate every possible variation, but suffice to say, the most important component — the patty — is excellent, provided that you order it medium-rare (or what commonly passes for medium-rare these days). All of the toppings I tried were of very good quality. For those who freeze up when confronted with a plethora of options, the menu offers a few combinations. One, the "Steakhouse Burger," is topped with Gorgonzola, fried onions, iceberg lettuce, steak sauce and butter. The flavors are well matched, but the main ingredient is good enough that to gussy it up risks bringing one to the point of diminishing returns.

The French fries are outstanding: beautifully browned, crisp on the outside, pillowy within. The herbed garlic fries, topped with a little shaved Parmesan, are even better.

Is Dave & Tony's "better" than your favorite burger? You'll have to decide that for yourself. But amid this glutted domain, it's reassuring to bite into a burger that is, plain and simple, damned good.