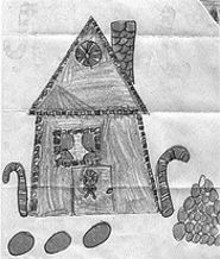 Though we are unable to visit the dreamy world of the Wonka Chocolate Factory in this life, some us will take advantage of the holiday season to do the next-best thing -- build a gingerbread house of cookies, candy and frosting. The Suburban Journal newspapers Gingerbread Architect Contest brings the whole caboodle of materials to 20 lucky kids who will get to construct gingerbread houses at Union Station Saturday.

The spectacle of 20 children, ages 8-12, each going about the building of a sculpture made of food in his or her own way, getting more and more messy as the blobs of sticky white icing multiply, is pretty cool. These lucky competitors were selected from hundreds of entries in the newspaper chain's annual contest, which asks contestants to draw the sort of gingerbread house they would like to try to construct. The colorful drawings arrive on the desk of Journals food editor Janice Denham, who, with her assistants, selects 20 winners. Ellisville eighth-grader Maggie Friedhoff reached last year's finals on the merits of her drawing of a rainbow-colored tour de force depicting a manse filigreed by M&Ms, candy canes, lollipops, peppermints and Hershey's Kisses.

The chosen few will gather at tables set up inside the mall and receive their kits, containing gingerbread and candy and a generous splotch of white Royal Icing, which, according to Denham, "becomes like cement after it's dry." The kids are allowed to bring their own candy as well, which is advisable. ("The kid right next to me had Red Hots, and he put them along the top of the roof, and I thought that was good," says Kirkwood fourth-grader Sam Tchen, a finalist in last year's contest.) As parents keenly observe the construction, the kids get down to work.

"First I put down icing on the platform and everywhere so it would stick," recalls Sam, "and then I put it on the sides and made them stay, and then I got more icing and put it on the edges. Then I got the other sides and the roof. Then I put icing over the house and decorated it with sprinkles and things like that. Then I put icing in little balls around it, and I used an ice-cream cone and turned it upside down and stuck it on the icing, and then I got M&Ms and decorated it like a Christmas tree."

Sam's edible wonder, like those of the other children, did not have to look like the drawing he submitted -- that would be nearly impossible for most of these artists. It's likely that he did not feel the fire of competition, either. That's because the Journals wisely decided to give prizes to all the kids, with no determination of first or second place. De-emphasizing the competitive aspect of the event makes the contest a no-pressure affair. Everyone leaves the mall with a goody bag -- last year's entrants got a baseball cap, mug, pen, candy, got milk? shirt and Mark McGwire poster.

Many kids agree that getting the house to stand in three dimensions is the main challenge: "I remember it took a long time to get the gingerbread house up," says Maggie, "but I got it up, and I still have it -- it's still holding together."

A hint to this year's young architects: Think A-frame.