Pretender to the Throne 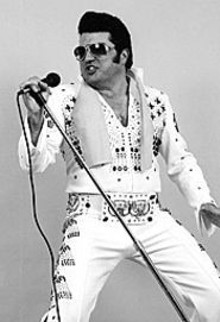 Steve Davis and the TCB Band

Jefferson Barracks Park, near the intersection of Kingston Drive and Telegraph Road.

Elvis may have left the building, but his ride ain't goin' nowhere, baby. Steve Davis, hardworking Elvis impersonator, has just put three quarts of oil into his Ford Econoline 250, then looked under the van to find a puddle of approximately three quarts of oil. The King's chariot is dead.

So Davis waits for a tow in Jacksonville, Illinois, where his gig as a strolling musician at Gloria's Roadside Café ended an hour ago.

As he stands in a phone booth, two kids walk past. "Hey, you look like Elvis," one of them says. He gets it all the time, even when he's not wearing a studded white jumpsuit and sunglasses. He motions for the kid to come over and pulls out his wallet, removing a photo of himself that he signs "Elvis" and hands to his latest fan.

The gig at Gloria's is one of the six to eight jobs Davis and his TCB Band work every weekend during the summer, a season Davis refers to as the "Elvis Equinox." The singer claims he can book concerts for noon, 6 p.m. and 10 p.m. on a single day. He also says he performed at an unreal 398 gigs last year -- he's busier then the King ever was.

The Brighton, Illinois, resident's alter ego emerged while he was a theater major at Northeast Missouri State University, in Kirksville. Davis dressed up for a costume party and whipped out his guitar. He's been earning his principal income as the King for the last fifteen years.

How seriously does Davis take his calling? He says he doesn't leap out of his car with a "Hey, baby" for whomever happens to be in the parking lot, but it's obvious that he's a student of the Memphis Mamou -- Davis knows each of Elvis' outfits and what concert or movie he wore them in, has read all the biographies of the King and knows how many gold albums he earned, and so on.

How seriously do the fans take Davis? The impersonator explains that the typical member of the Steve Davis Fan Club is a woman older than 40 who has made the pilgrimage to Graceland many times. He says he gets occasional fan mail and that "sometimes women will send me their underwear in the mail, but I can't take that personally. They don't know Steve Davis; they just have a relationship with Elvis Presley. A great majority of it [the underwear] is unresponded to."

Believe it or not, Davis is occasionally asked to perform at funerals, and fully one-fourth of his business comes from bar and bat mitzvah appearances. At the Jewish celebrations he sings his usual fare, but, he says, "if they wanted Elvis to sing 'Hava Nagila,' I would be more than happy to do that."