Punk Princes of Jazz: The Bad plus is not a cover band 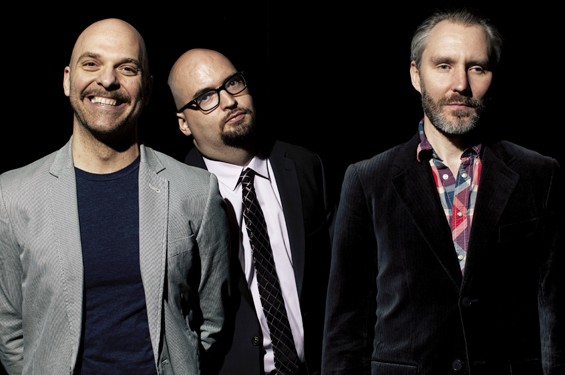 The Bad Plus: Punk princes of jazz.

Punk Princes of Jazz: The Bad plus is not a cover band

Twelve years after their first album together and many more than that since they first met in a suburban Minnesota junior high school, the members of the Bad Plus still reign as the punk princes of jazz. "Punk" is not meant to refer to appearance. There's the bookish pianist Ethan Iverson, lank and sleepy-eyed bassist Reid Anderson, and — well, OK, drummer Dave King is a little punk — but the influence is clearly there in the band's music. In 2001 the Bad Plus was declared by many critics the most exciting thing to happen to jazz, enthralling audiences through songs with amusing, robot-related back-stories and producing inventive covers of existing songs such as Aphex Twin's "Flim." That was a long time ago, and while the Bad Plus has matured considerably, its attitude hasn't tempered. Nor have the accolades. Iverson probably put it best when he once said the band had always set out to create something that people had never heard before. This mission statement still shines through in its music today.

The Bad Plus is swinging through town this week to perform at Jazz at the Bistro on the final leg of its traditional holiday sojourn that starts in Chicago and ends in St. Louis. We caught up with Anderson to talk about the origins of the group's holiday schedule, its latest release (the moody Made Possible) and about how three different personalities come together to compose music with that unmistakable Bad Plus signature — and why you shouldn't ask them to play any more of those damn covers.

Jessica Lussenhop: You guys just finished up your annual holiday shows. How did all of that go?

Reid Anderson: Yeah, we do the Vanguard for New Year's and the surrounding week, and Minneapolis we do a post-Christmas run that we've been doing now for the last twelve years, I guess. We go to Chicago just immediately before Christmas, so it's a pretty crazy time for us.

So this is a three-city holiday tradition?

And St. Louis, which this year is a little delayed. Usually we go straight from the Vanguard to St. Louis. It's really nuts, but it's great.

You guys are from Minneapolis, but how did you establish that order — aside from being home for the holidays?

The Dakota was one of the first places in the world to offer us a performance. Us being home for the holidays, we just decided no one else is really playing around that time. It was open, so we just started doing it. As we gathered a following it was good for everybody. The Vanguard thing came about a few years ago — we've been playing at the Vanguard since 2003. You know, they have this long-standing tradition of, I think it was Michael White that used to play there all the time. I think they wanted to change that up, and we seemed like the right fit for that. It's been great for us and great for the Vanguard. It's always a great time; it's a busy week for everybody.

So how did St. Louis get shoehorned in there?

My suspicion is it wasn't intended to be, "Oh, let's have the Bad-Plus-after-New-Year's tradition," it was just an open date. I think they weren't even sure about how they felt about us. I remember Bob — he's involved in the club and the booking of the club — he was telling us sort of straight up he didn't think he would like us, either personally or musically. And we went there, and we played, and we just ended up loving each other, and it was such a great experience. They just decided to have us back at that time of year, and it just kind of worked. It was just one of those things. It wasn't planned to be that way, but it fit everyone's schedule, and it's nice to establish these traditions and start off our year going to St. Louis.

Any connections to St. Louis or specific plans besides playing music?

Actually, yeah, Dave [King] always brings his family down there, and they go to...what's that crazy museum?

Yeah, they always go there, and yeah, we've got some friends down there and haunts we like to frequent. You get to know a place little by little.

The Bad Plus has done nine albums. Do you see a clear evolution when you look at the body of work twelve years later?

I think if you were to sit and listen to the records back to back, there'd be a clear evolution. But at the same time I think this idea of evolution — like bands have to constantly evolve and reshape themselves — I think that's totally unrealistic. I think the truth is the Bad Plus has been the Bad Plus since note one in one way or another. There's something essential that's always been there and will always be there, and that's what's beautiful. We all have our personal signature, everyone who does anything in the world, there's some kind of a personality there that's at the core. You can put it in different clothes, or you can look at if from different perspectives, but it's still going to be the same core idea there. But I think that gives you a certain amount of freedom, too. We can add electronics or we can do an album with a singer like we did a few years ago [2008's For All I Care], and it's still the Bad Plus.

In past interviews I've heard Dave King say you all bring something different to the group. Have you established what your superpower is?

We all sort of know where we stand in terms of what we bring to the group. I think that's one of our strengths, too. We're very different people, and we are very different kinds of musicians. We're interested in diverse things, and some of those things don't have a crossover, even. But there's a playing field where we meet at where we understand each other and where we respect each other, so I think that's one of the strengths of the band, the fact that we're three composers. We have three distinctive voices as composers. It all takes on the sound of a band when we play together.

What's coming up for you guys moving forward?

Moving forward we've been performing The Rite of Spring by Stravinsky and doing our own concert version of it involving certain video and lighting elements. But we're going to be performing that with the great Mark Morris Dance Group, so he's going to be choreographing that, and that's going to be really exciting. We did tour last summer with the great saxophone player Joshua Redman as our special guest and, who knows, maybe we'll do some more concerts with him. Oh, and in fact we're going to do some concerts in New York at Jazz at Lincoln Center with Bill Frisell.

Are you guys sort of done doing the covers, or is that something that you still enjoy doing? Or is it annoying talking about it?

We have been phasing them out. We did enjoy playing them, and maybe we will again at some point. Frankly, the three of us are composers first and foremost, and the press has kind of just really jumped on the angle of the covers too much for our taste. It's not really what we're about — we're an original-music band first and foremost and always have been. So, yeah, the covers aren't really a part of what we're doing these days.

So what can people expect at your shows this week?

They can expect to see the Bad Plus playing our music and putting on the best show we can. We feel at home there now; people come out to see us year after year. And if people haven't come out to see us, they can check it out. Be part of the tradition.