By Ian Froeb [email protected]
click to flip through (2) 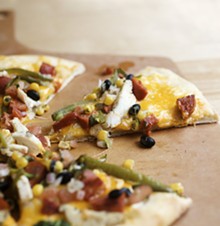 If you order one of the "Classics" at PW Pizza — the pepperoni, say — what arrives at your table looks like nothing so much as a pepperoni pizza. This is more remarkable than it might seem. In the past few years St. Louis has seen an evolution in its pizza sensibilities — an evolution or maybe an arms race, with pizzas slid into wood-fired brick ovens that cook at six, no, seven, no, eight hundred degrees.

Sometimes, you can't help but marvel at how good this pizza is, how authentic mozzarella di bufala bubbles and oozes from the intense heat of that wood-fired oven yet never quite loses its shape and character the way that conventional American mozz does.

Sometimes, though, you just want a pepperoni pizza and a cold beer to wash it down.

PW Pizza opened in May, the latest venture from the married team of Paul and Wendy Hamilton, who already own two of St. Louis' most popular higher-end restaurants, 1111 Mississippi and Vin de Set. PW Pizza is located on the ground floor of the same building as Vin de Set, on Chouteau Avenue east of Jefferson Avenue. (The building is also home to the Hamiltons' event venue, Moulin, and specialty grocery, Grand Petite Market.)

The restaurant is essentially a single room, with the bar and open kitchen along one wall. Booths line the opposite wall, with tables in between. (If you're dining as a duo, snag one of the booths; the two-tops are barely large enough to contain a pizza, plates and drinks.) As at Vin de Set, the dominant design feature is exposed brick. One cool, colorful touch: The logos of several pre-Prohibition St. Louis breweries are painted on the walls.

PW Pizza offers a wide selection of specialty pizzas as well as the option to build your own. The essential pie is always the same, though: a twelve-inch crust, thin but not too thin, baked in a standard deck oven. The crust's texture hits that sweet spot between airy and chewy; its flavor is pleasant, if unobtrusive. In appearance and taste, the crust might remind you of Dewey's Pizza, the small, Cincinnati-based chain with four area locations. (Honey-wheat and gluten-free crusts are also available, as is a vegan substitute for cheese, making this one of the more accommodating pizzerias I've visited.)

The pepperoni is one of four pizzas dubbed "Classics," along with a sausage, a mushroom and a traditional margherita. Its simplicity is winning. The tomato sauce has the acidic bite and full, mildly sweet flavor of a good tomato, with a hint of heat. The mozzarella is melted to perfect consistency, and the ratio of cheese-to-sauce-to-pepperoni is ideal. Oregano is the only additional accent, and the only one needed. This pizza doesn't reinvent the wheel, but it will send you home happy.

Besides the "Classics," PW Pizza offers pizzas created by both Hamiltons ("Paul's Picks" and "Wendy's Favs" on the menu) as well as executive chef Randall Eickmeyer ("Chef's Choice"). If you can't decide between the two styles, the kitchen will make a pie with half of one kind, half the other.

Paul Hamilton's selections are meat-intensive: the "Philly" has sliced prime rib; the (sigh) "Big Balls," meatballs. The "Wolf" trumps them both with pepperoni, sausage and bacon, as well as roasted garlic, caramelized onion and green bell pepper with tomato sauce and mozzarella. The housemade sausage, flavored with fennel, is excellent, and the gentle sweetness of the garlic and onion, both properly cooked, provides a welcome contrast to all that meat.

From Wendy's menu, I opted for the (sigh) "Popeye and Olive Oil," a simple, sensible combination of olive oil, roasted garlic, spinach, roasted red peppers and goat cheese. Here the garlic provides the bass note for the brighter flavors of the spinach and red pepper and the tangy cheese.

The "Chef's Choice" list includes the "Pulled Piggy," a welcome twist to the tired barbecue-chicken pizza. Here, as the name makes clear, the meat is pulled pork atop a tangy, spicy and thankfully not sweet barbecue sauce. The cheese is Gruyère; its distinct flavor might not put you in mind of barbecue, but it works here. For crunch and a piquant note, thickly chopped and very lightly dressed slaw is strewn across the top of the pie. The (sigh) "Spicy Lei," another of the chef's recipes, pairs pineapple with housemade chorizo sausage. The sausage is excellent, though its texture is unlike either Mexican or Spanish chorizo, closer to, say, kielbasa or even a frankfurter.

There is food here besides pizza, including both calzones (with cheese, or meat and cheese, or vegetables and cheese) and oven-roasted sandwiches. Of the latter category, I liked the (not sigh-worthy) "Brazilian," which tops tender prime rib with a bracing chimichurri sauce and pleasantly bitter arugula as well as roasted red peppers, caramelized onion and provolone.

Avoid the oven-roasted chicken wings. They are caked in a generically spicy dry rub that might evoke memories of Shake 'N Bake, and they aren't roasted long enough to crisp the skin. This was the only outright mistake I encountered, though the otherwise good house salad (greens, red onion, peperoncini, pepperoni and pecorino romano) included two thick wedges of the worst-looking tomatoes I've ever been served in a restaurant, pale pink and watery.

The beer list is good, with several craft beers on draft and many more available by the bottle. (The wine list is less impressive, though, at a casual pizza joint, you likely won't mind this as much. I mention it only because the Hamiltons have impressive lists at both 1111 Mississippi and Vin de Set.) Though I'm a fan of complex craft beers, I would be lying if I said I wasn't happiest at PW Pizza when I paired a pizza with a couple pints of Schlafly Summer Lager, a tasty but not overly sophisticated brew.

Sometimes, the simple pleasures are more than enough.