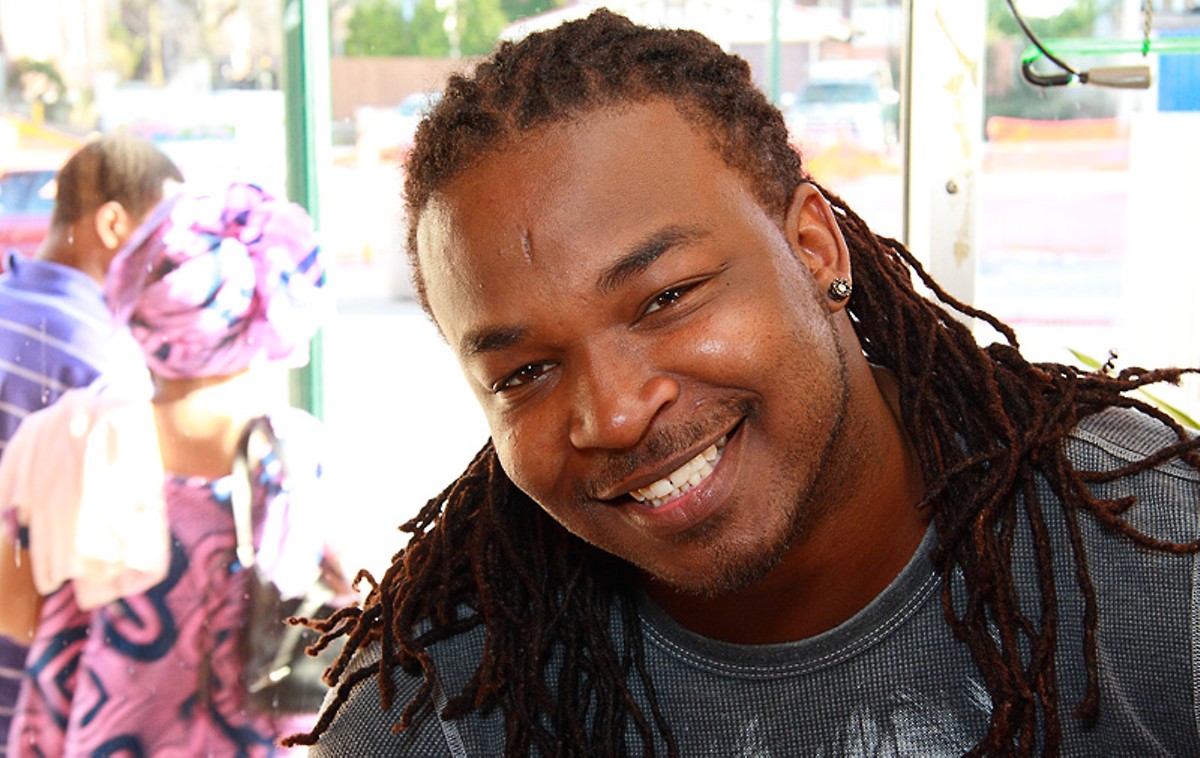 Early one Friday morning in May 2009, two cars left a birthday bash for the rapper Yo Gotti, which had taken place at Club Society near Union Station in downtown St. Louis. A Jaguar was behind an SUV; they stopped at a red light at the intersection of 18th and Market streets. Another car pulled up alongside them. At least two gunmen opened fire, killing the driver and two other passengers in the SUV. The bullet-riddled ride crashed into a nearby bus stop, and the shooters sped off before police arrived on the scene.

Baby Huey, the artist behind the wildly successful 2007 club jam "Pop, Lock & Drop It," was riding in the Jaguar. His childhood friends from the gritty Walnut Park neighborhood of north St. Louis were the victims. Huey survived the drive-by shaken but otherwise unscathed.

"I really don't know what happened or why it happened," he says in a recent interview in the Delmar Loop. "We basically was at the club and had a wonderful time. No problems, no altercations, no nothing. Once we left, the shots went off at the light. We were right behind them. It was hella loud. Luckily, my car didn't get shot."

Huey was scheduled to perform the evening after the shootout at the Pageant with Nelly and his crew, the St. Lunatics. After the incident, the show's promoters dropped him from the bill, citing concerns that the killers — who were never apprehended by police — might strike again.

Huey still bristles at the suggestion that he may have been the intended target.

"It was just a rumor," he says adamantly. "You got all the opportunity in the world to shoot at [my] vehicle first. You passed me up, and you know whose car this is — ain't nobody else got a Jaguar, so you know whose car it is. It's just if you a popular person, and you in the club, if anything happens — even if it's your homeboys — they going to say whose name first? Huey's."

The brush with death and subsequent boot from one of the city's biggest hip-hop shows of the year marked a low point in the young rapper's career. He was just seventeen when he recorded his debut album, Notebook Paper, and achieved platinum-selling success with "Pop, Lock & Drop It." A playful romp in the grand tradition of ass-shaking odes such as "Baby Got Back," the song peaked at No. 6 on the Billboard Hot 100 and spawned countless remixes. But in the following years, Huey beefed with Nelly, feuded with his label and struggled to shake the perception that he was just a one-and-done sensation.

Now 22, Huey is heavily tattooed, flashes a charismatic smile and sports long, intricately woven dreadlocks. He speaks confidently about his future, but he's humble enough to realize that his behavior before rubbed on-lookers as arrogant and immature. He admits that it will be tough to duplicate his previous chart-topping success but has no doubt that he can shake the sophomore slump. His new record, titled Redemption, is scheduled for release on September 14.

"I'm about to redeem myself," Huey says, explaining the album title. "In the eyes of the public, I kind of got tied down. A lot of people were saying, 'He's just a one-hit wonder; he didn't have it in him.' So I feel like I have to redeem myself. I have to show these people what I can do, what I am — who I am."

Huey (given name Lawrence Franks Jr.) was born and raised in Kinloch, a tiny municipality near Lambert Airport plagued by poverty and crime. His family moved to equally tough Walnut Park when he was five years old and returned to the county when he was a teenager. By then the airport had bought up hundreds of houses for noise abatement purposes, stripping Kinloch of its tax base and intensifying the social problems.

"There was always a lot of drugs going on and, of course, a little bit of violence," Huey recalls. "But when I came back the airport thing came about, and the police was real bad. County police was coming out there, chasing people and shocking them with tasers — all kind of stuff happened. Before you knew it was like a ghost town."

Huey says his experiences growing up in the hood often provide fodder for his lyrics. Perhaps the best example is "Pop, Lock & Drop It, " a phrase that ostensibly describes a dance move but doubles as slang for firing a pistol.

"I always rap about my life," Huey says. "Whether it's memories or things that's going on today that's a big part of my music. That's one of the best things I can do is tell the truth.

With "Smile and Wave," the first single off Redemption, Huey takes aim at his critics. The song features Dorrough, the Houston emcee behind the hoopty anthem "Ice Cream Paint Job," and another artist hoping to capitalize on a hit single. Backed by a trunk-thumping beat with a snapping hi-hat, the duo trades lines like, "They said I wouldn't make it out/ and even though I made it out/I still have to question what these other suckers hate about/ never mind their hater mouths."

"It's just saying you can't always react in a negative way," Huey explains. "I feel like laughing in their face, smiling at 'em and waving is going to make 'em even madder. You either going to get with it or you ain't — I'm not going to let it stop me from doing what I'm doing."

Another new track, "Hello to All My Haters," works along the same lines, scornfully confronting "Internet blogs" and hip-hop gossip. "Hello to all my haters," Huey raps on the chorus, "I love your sneak dissin', along with the critics you put me in this position."

The song references the drive-by incident and ends with the lyrical equivalent of a double middle-finger salute: "Mad 'cause you hate me, but I still love ya, can't do without ya but look here — fuck you! — 'cause I can do without ya."

Despite the confrontational bluster, Huey says he has matured. He is back on good terms with Nelly after a spat over the rapper's refusal to appear on Notebook Paper. He emphasizes that he's trying be more aware of his surroundings and avoid situations like the one ended in the deaths of his friends last May.

"You really got to try to make all the right choices," Huey says. "I know I'm probably not going to make all of them, but I'm trying to make 99 percent of them."