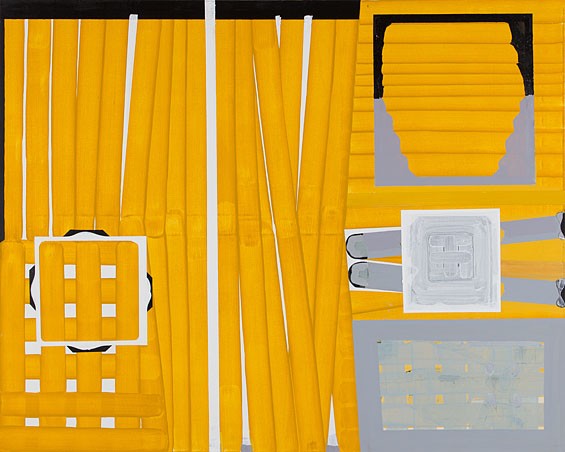 Coming of age in New York in the 1960s, painter Gary Stephan worked as a studio assistant for Jasper Johns before graduating to solo shows of his own at the Mary Boone, Marlborough and other prestigious Manhattan galleries. His work is now in the permanent collections of the Guggenheim Museum of Art, as well as the Metropolitan and the Museum of Modern Art.

But tastes change. Stephan's idiosyncratic form of abstraction eventually fell from favor, and between 2002 and 2013 he had only one solo show in Manhattan.

Now in his early seventies, Stephan is having a moment, celebrating the occasion with twin solo shows: one at Manhattan's Susan Inglett Gallery opening later this month, and Recent Work, a collection of eleven rule-bending canvases now on view at the Philip Slein Gallery. Organized by Jim Schmidt, Recent Work comprises paintings of remarkable complexity, where Stephan uses a simplified visual language of parallel brushstrokes — evocative of wood slats — to create a logical structure, which he then subverts with opaque amoebic forms that disrupt the paintings' internal logic, both covering and revealing its underlying structure.

Many of Stephan's paintings conjure the surrealist fixation with the real versus the imagined, or the surface as it relates to what lies beneath. Only here, Stephan applies the question to painting, toggling between the idea of the painting as a physical object and the painting as a mere surface representation. Take The Spine of the Book, a large canvas that features overlapping parallel yellow brushstrokes. These orderly lines speak to an internal organization — all the more so in that Stephan incorporates the cross brace of the canvas stretcher itself into his abstract structure. The stretcher's horizontal lines leave a painterly trace across the painting's vertical yellow slats, binding Stephan's imagined artistic logic to the canvas' actual physical structure and objective parameters.

Subtle as Stephan's project is, he takes it a few steps further by using an opaque light blue paint to cover the canvas' four corners. This flat surface coat imposes an imperfect cruciform on the underlying structure of yellow brushstrokes. It is as though we are looking at two paintings here, both rendered in the shorthand of abstraction: The first, a meditation on the the painting's underlying structure, the sleight-of-hand artifice that painters employ to build a work from the canvas up; and the second, the finished product — the surface — which tries through its very artfulness to obscure its constructed origins.

Meanwhile, Stephan adds another layer of complexity to Spine, populating the canvas with a series of abstract black shapes that weave in and out of the orderly yellow structure and the surface coat of light blue. These irrational shapes, defying as they do the internal logic of Spine, seem to remind us that no matter how well executed, the act of painting is always imperfect — that even our best laid plans fall prey to chance.

These ideas run throughout Recent Work, a show filled with forced perspective, painterly interruptions, and paintings within paintings — all rendered in a cheerful palette that is rich in bright greens, yellows and reds. Innumerable applications of paint — everything from almost transparent lines that show individual bristle strokes to a near impasto — lend the works a surface dynamism, all of which makes Stephan's recent work not only intellectually demanding, but easy on the eyes.