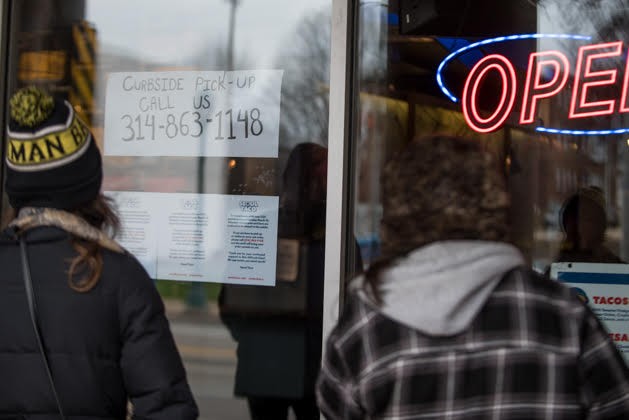 As COVID-19 spread, restaurants have transitioned curb-side delivery in their fight to survive.

Not five minutes after David Sandusky sent out a press release announcing that he would be shuttering BEAST Butchery & Block for everything but takeout and dining services, the pitmaster and restaurateur offered a sobering analysis of his future in the industry. Not yet a year ago, Sandusky and his wife, Meggan, took a huge leap, expanding their critically acclaimed Belleville smokehouse, BEAST Craft BBQ, to this side of the river. Their vision was ambitious: A smokehouse, butcher and grocery shop and a live-fire demo kitchen and events space where Sandusky planned to offer a chef’s table-style, fine-dining take on barbecue.

From June 2019 until March 16, 2020, the Sanduskys were chugging along. There had been struggles along the way – business had started out slower than they’d hoped, bills piled up – but they’d made the right adjustments and seemed to be finally figuring things out. Then COVID-19 hit.

“I had to lay off 45 people,” Sandusky says. “I think the restaurant industry needed a correction, but not like this. This is devastation. We’re going to be lucky to come out of this. I’m hopeful people will come out on the back end of this and want to spend money on dining and stretch their legs again, but I am worried that they will be extremely conservative with their cash – and rightfully so. If this isn’t a long thing, I hope we can pull out of this. Barely.”

The Sanduskys are far from alone in their struggles. In mere weeks, the St. Louis restaurant community as a whole has gone from touting several James Beard Award nominations as a sign of its ascendance to having its very existence threatened by a global pandemic. The speed with which the coronavirus disaster hit business owners, employees and vendors has been dizzying. At the beginning of March, the local restaurant scene was collectively urging diners to come out and show their support for the hospitality industry by patronizing local businesses.

By the month’s second week, most businesses had gone to takeout and delivery operations only. Those who hadn’t made this move had the decision made for them on March 17, when leaders from St. Louis city, St. Louis County, St. Charles County and Franklin County ordered all restaurants and bars closed for dine-in service. At press time, no timeline has been given for how long the restrictions on dine-in business will last. St. Charles County Executive Steve Ehlmann struck an optimistic, tone-deaf, chord at the press conference announcing the declaration, saying that, while he understood the negative impact this would have on small businesses, he was confident they would figure it out.

“We’re not closing businesses. We’re just changing the way they do business,” Ehlmann explained. “Personally, I have a lot of faith in our small business people, our restaurateurs and all the people impacted by this. They’re going to find a way to still provide the services that they provide and make the money that they need to make to pay their bills and pay their employees. I predict you’re going to see some very original thinking here. I know for sure people aren’t going to stop eating …”

What Ehlmann’s Pollyanna-like optimism in the restaurant industry’s ability to problem solve its way out of this mess fails to get is that in the food business there is no time allowance for “original thinking” – what we are looking at is the distinct possibility that the St. Louis restaurant scene, like every restaurant scene around the world, will look vastly different when the threat from COVID-19 is over.

Joel Crespo, who co-owns Guerrilla Street food with his business partner, Brian Hardesty, has a bleak picture of what that future might look like.

“Your favorite places are going to be gone,” Crespo says. “Then they’ll be replaced by what? Big corporate places and chains and places with million-dollar investors? That’s what the landscape could look like when all of these great places go away. This is going to be earth shattering for a lot of people.”