Return of the Knuckler 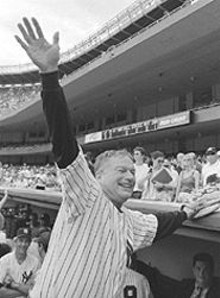 All events are free.

"I was pitching for the Astros when the book came out," says Jim Bouton, "and the San Diego Padres burned a copy of Ball Four in the visiting-team clubhouse so it would be sitting on the floor when we arrived." In the introduction to the current edition of his book, Bouton recalls Pete Rose coming to the top step of the dugout during a game to yell, "Fuck you, Shakespeare!" at the author.

In 1970, 31-year-old knuckleballer Jim Bouton published his diary of a season with the Seattle Pilots (now the Milwaukee Brewers), Ball Four. Everyone had a strong opinion of the book, which was one of the first sports books to tell it like it really was, complete with amphetamine pep pills, "beaver-shooting," clubhouse pranks, quotidian boredom, buffoonish managers and the foibles of real people. Bowie Kuhn, then-commissioner of baseball, asked Bouton to sign a statement shortly after Ball Four's publication admitting that the book was all lies. Bouton -- the fun-loving diarist, the noble iconoclast, the pitcher with a rapidly aging arm -- refused and found himself living the life of a pariah. Despite his banishment, Ball Four became the bestselling sports book of all time.

"You had mostly a sort of milk-and-cookies school of book-writing," says Bouton, who wanted to share the behind-the-scenes shenanigans of major- and minor-league baseball that he thought were so funny. He began taking notes. "I'd write on notepad paper, airsickness bags, cocktail napkins and bar coasters," he says, "and each night talk them into a tape recorder."

The book is still hilarious. The main avocation of the players was "beaver-shooting," developing ever-more-elaborate systems to look up the skirts of comely female fans. One player carried a drill on the road for use on dugout and hotel-room walls (giving the term "Knothole Gang" a whole new meaning).

More significantly, the book revealed just how hard it was for players of the era to make a living. The owners, who could be skinflints, had particular advantages when it came time to talk contract. Portions of Ball Four were entered as evidence at the 1975 Andy Messersmith trial, which gave rise to free agency.

Bouton won two games as a Yankee during the 1964 World Series (which the Cardinals eventually won) and says, "One of my fondest memories is of hanging around the lobby of the Chase Park Plaza Hotel the night before Game Six. I also remember the great Cardinal lineup with [Julian] Javier and [Dick] Groat and Bill White and Ken Boyer and Tim McCarver."

Bouton, who is also the inventor of Big League Chew shredded bubble gum, has written the third and what he claims will be the final epilogue to the book, detailing the unusual newspaper piece that led the Yankees to invite him to an old-timers' game after decades of blackballing; a recent personal tragedy; and his views on the state of the game.