Review: Olive + Oak Is on Track to Be This Year's Best New Restaurant

The well-heeled passersby probably had some choice looks for me as I sat on Olive + Oak's Old Webster patio, gnawing every last morsel of a cowboy rib eye bone with my bare hands like it was a backyard barbecue. I didn't notice. To say I have never been more enraptured by a piece of steak is not an understatement.

This behemoth of a cut — 35 ounces of prime beef, meant to share with at least one dining partner — was beautifully marbled, encrusted with a thick layer of char and impeccably cooked to a garnet red medium rare. It's presented sliced off the bone, but never fear: The meat had been perfectly rested so it retained its juices. As they slowly dripped out, they mingled with a rapidly melting dollop of shallot butter, forming a gravy-like sauce that worked as well for the accompanying fries as it did for the steak.

And these fries? Scene-stealers themselves. How the folks at Olive + Oak have engineered them to have the consistency of mashed potatoes on the inside even while they're perfectly crisp on the outside is a mystery. To say that I got a little misty remembering them just now is not hyperbole.

Yet this dish, more masterpiece than mere entrée, is not an outlier at Olive + Oak. At this Webster Groves restaurant, the hits keep coming, one after another.

A velvety blue crab gratin appetizer, spiked with just a touch of Calabrian chili for some back-palate heat, begs to be devoured, no matter how much you say you want to save room for the main courses. The Hama Hama oysters on offer are so fresh you'd swear you were dining on the Olympic Peninsula of Washington. Even an appetizer of a single clam, broiled with breadcrumbs and lardo, makes a dramatic impact with its shockingly tender mouth feel.

The story behind Olive + Oak suggests the place may have been destined to be extraordinary. More than just a restaurant, the three-month-old spot was conceived as a way to honor Oliver Hinkle and Oakes Ortyl. Co-owners Mark Hinkle and Greg Ortyl each had a son who died at a very young age because of congenital heart defects. Hinkle and Ortyl actually met through the Children's Heart Foundation and bonded through their shared grief.

A front-of-house veteran of such acclaimed institutions as Chicago's Gibson's Restaurant Group and St. Louis' own Annie Gunn's, Hinkle wanted to memorialize his son at a place that brings families together around the dinner table. In Ortyl, he found a partner who would allow him to execute his vision at exactly the right time in his career for exactly the right reasons. The pair settled on the name, concept and location last summer and got to work creating what, to me, is a clear front-runner for the year's best new restaurant.

As Webster Groves residents, Hinkle and Ortyl settled on the heart of Old Webster, with the hopes of creating a top-tier restaurant right in their own backyards. The storefront, a former boutique, exudes a relaxed elegance that mixes polished white subway tiles with gray-blue tufted banquettes. Rustic, light-colored wood tables dot the space, and two modern tree sculptures — with copper olive and oak leaves, of course — greet guests upon arrival. The most prominent décor, however, is the wall of black-and-white family photographs. Combined with a few subtle pieces of heart-shaped artwork, it reminds you that calling this a labor of love is no mere lip service.

Hinkle tapped his former colleague, Annie Gunn's executive sous chef Jesse Mendica, to lead Olive + Oak's kitchen. The rib eye, then, is no surprise, but she proves she can hit the mark on every other type of cuisine as well. Cheese curds, beer-battered and filled with molten funky white cheese, were so large I had to do a double take to make sure we hadn't been accidentally served fish and chips. A beef tenderloin slider looked less impressive when it arrived — a simple slice of filet sat atop a bun with no sauce or condiments. One bite erased any doubt, though, as the luscious meat acted like a sponge for melted butter and onion. If White Castle went haute cuisine, this would be the result.

Large, juicy chicken wings are anything but standard bar fare. The drummies are simply seasoned and lightly glazed with a subtle kiss of honey butter — more a way to showcase the perfectly crisped chicken skin than a sauce. The light touch carries through to the delicate yogurt and caraway dipping sauce, which enhances the wings rather than covering them up.

Mendica's ode to morel season features ribbons of tagliatelle tossed with ramps and butter — a dish that announces spring as beautifully as a blossoming cherry tree. Pan-seared halibut, plated alongside olive oil and lemon-dressed arugula, was enlivened by warm, balsamic-glazed grapes. The accompanying creamy potato cake had a golden layer of crust and seeped butter, like hash browns made by a veteran breakfast cook.

It was a pleasure to see the humble catfish treated with the same respect shown to the halibut. Rather than the usual cornmeal crust, this fish was simply seared, no breading required. The melt-in-the-mouth filet can't shake its Southern roots, though. Mendica tops it with a shrimp filé butter (which uses the spice found in Creole and Cajun cooking). It soaks into the creamy cheddar grits like a velvety Creole gravy.

Even the sandwiches at Olive + Oak are extraordinary. On one visit, the "dip of the day" featured shaved layers of tender lamb, served on crusty bread with a side of lamb jus for dunking. A thin slice of goat cheese cut through the lamb's richness with sweet tang.

And when a place like Olive + Oak puts a burger on the menu, take my word for it — this is something you want to order. Two thin patties of griddled beef are topped with layers of melted white American cheese, a few dill pickle slices and some minced yellow onions, then placed atop a poufy sandwich roll. The sandwich glistens when it arrives, as if it has been dipped in clarified butter and heralded with a spotlight from on high. It sounds simple, but the flavor is a cross between a greasy diner burger and the middle bun on a fast-food double cheeseburger in the way it soaks in up all the juice and goo. This town has been blessed with some outstanding burgers in recent years; this should be added to that list.

In fact, if that burger showed up all over again on the dessert menu, I may have ordered it a second time. But then I would have missed out on the pot de crème, a decadent caramel custard dusted with brown butter oatmeal crumble. The savory side of the meal is a tough act to follow, but this does so gracefully.

Perhaps Olive + Oak's only flaw is that is impossibly busy, with reservations booked already three months out. (The bar and the patio are both first-come first-served, however, and I never had much of a wait for a seat at either.) It's not surprising that everyone wants to eat here — including the restaurant's own staff members, who choose to hang out at their place of employment on their days off. That speaks volumes not only of the caliber of food coming out of this kitchen, but also of the culture that Hinkle and Ortyl have created at this impeccable restaurant.

The two wanted the Olive + Oak moniker to reflect more than just the names of their sons. Both olive and oak trees are impressive specimens that live to a great age. It's appropriate: Thanks to the outstanding restaurant they have created, Hinkle and Ortyl will be honoring their sons' memories for many years to come. 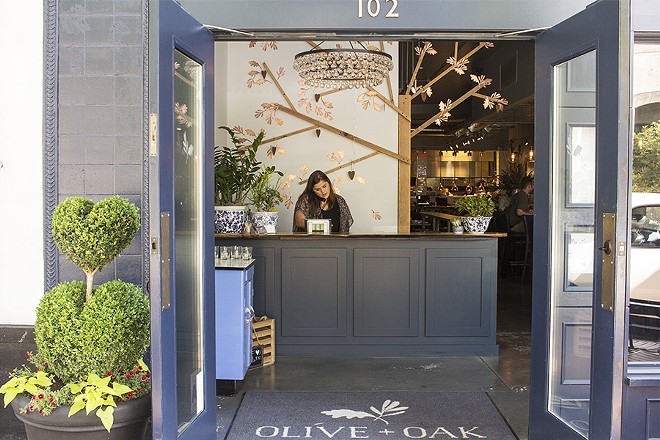 Turn the page for more photos of Olive + Oak.

Jump to comments
« Review: Nami Ramen Has Big Ambitions, But Comes Up Short   |   Review: Moya Grill Shows How Delicious Fast-Casual Food Can Be »