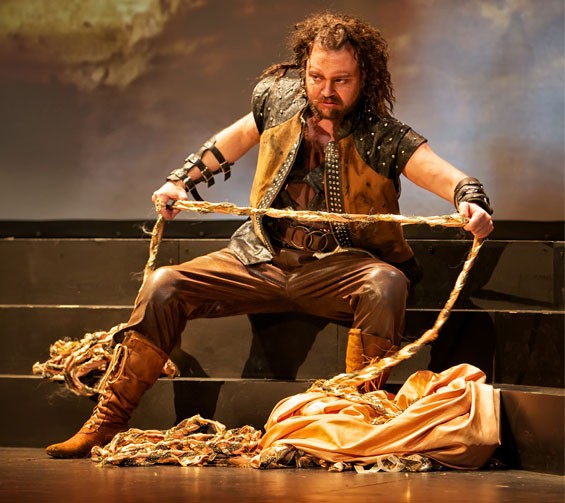 For its nineteenth season, Union Avenue Opera tackles one of life's most painful mysteries: What does love become when it goes bad?

Puccini's Madama Butterfly (July 12 through 20) is a pillar of the repertoire, depite being a love story so bleak it serves as the framework for Fatal Attraction, the worst love story of all time — and Madama Butterfly makes even that look like a jewelry commercial. Our heroine is Cio-Cio San, a Japanese girl who is contract-married to the U.S. Naval officer Pinkerton in early-1900s Japan. Pinkerton is only getting married because it was hard to get the milk for free in those days, and he knows he'll be transferred out of Japan eventually. Sure enough, Pinkerton ships out for America, leaving his "wife" behind. She faithfully awaits his return, not knowing he's now married "for real" to an American woman. Fair's fair, though; Pinkerton doesn't know he has a son by Cio-Cio San. They both soon discover one another's big secrets, and the true character of each is revealed in a most heartbreaking fashion.

Heartbreak also looms large in Wagner's Die Walküre, which closes UAO's season (August 16 through 24) in Jonathan Dove's English adaptation of the big sturm und drang show. Brünnhilde is the Valkyrie of the title, a warrior-woman who collects the bodies of the bravest heroes for the afterlife in her father Wotan's hall. Siegmund is just such a hero, but he is doomed to die for an ignominious crime: His sister, Sieglinde, has fathered his child, thereby preserving the family name and also making audiences shudder involuntarily for more than a century. Brünnhilde goes against Wotan's wishes and warns Siegmund of his imminent demise, which gains him only a momentary respite from death — Wotan intervenes personally to mete out his punishment. In doing so, Wotan forges another link in the chain of circumstances that will lead to his own death, and the deaths of all the gods. And he must also punish his Brünnhilde, whose crime was being too loyal. A deep vein of melancholy runs through Die Walküre. Family ties are sundered, people follow their hearts only to find sorrow and death, and the destruction of the gods is in the offing. And yet, there's hope among all this darkness: Siegmund and Sieglinde succeed in continuing the line of heroes, and Brünnhilde will be saved by their offspring. And then she'll be betrayed by him, but that's another opera.

Charles Bukowski was a hard-drinkin', casual womanizing, blue collar product of Los Angeles between the two world wars. His sizable body of work is rife with drunken parties, blurry moments of rage and a strong romantic streak for women he's loved and lost, as well as a deeply personal distaste for the workaday world he left behind when he pursued a career as a writer and poet. So of course, he's the perfect character for a musical. Spencer Green and Gary Stockdale's Bukowsical takes a modern approach to the rags-to-riches trope of the classic musical; our hero never finds the riches, but rather exults in his perpetual state of self-inflicted scummy delights. It's a profoundly scatological show that celebrates all the small joys of life at the bottom: loose women, wild parties and that effortless drift toward nowhere. As such, it's the perfect show for New Line Theatre, St. Louis' premier company when it comes to raw-nerve theatrics. New Line presents the first-ever regional production of Bukowsical as the nightcap for its current season, which is the equivalent of going out on a very low note — and that's a compliment. Fans of the writer, fans of debauchery and fans of raunchy musicals, this is your show. Bukowsical roars into life Thursday through Saturday (May 30 through June 22) at the Washington University South Campus Theatre (6501 Clayton Road, Richmond Heights; 314-534-1111 or www.newlinetheatre.com). Tickets are $10 to $20.

Pretty much every fan of the genre has his/her own pet theory of rock & roll and its ideal form. The only thing we can posit for sure is that what floats your boat might sink ours, and vice versa. There are those who will always insist the music is best served fast, loud and limited to three chords. This contingent will stand for no window-dressing whatsoever — their prerogative if they want it. Sure, some very good records have been made adhering to this formula, but ultimately it's a closed circle; and anyway, the guiding spirit of rock & roll has always been one of fluid freedom-seeking, the blurring of seemingly fixed, rigid boundaries. Which is where strings, woodwinds and brass (other than the standard-issue honkin' and brayin' saxophone, that is) enter the mix. Orchestral instruments, that is — very, supposedly, un-rock & roll suspects. But a small string section or horn chart can make the doors of any rock/pop composition open wide into new, spacious rooms; an entire orchestra takes those doors and blows them off their hinges...and knocks the surrounding walls down, too. During the second half of the 1960s, the era's bolder songwriters and arrangers (Brian Wilson, Paul McCartney and, to a lesser extent, John Lennon, Gary Brooker, Ian Anderson, Graham Nash, Justin Hayward, Robert Fripp, et al.) began writing for and working within the expanded tonal and harmonic palette of strings and wind instruments. The results were glorious, and old rules were rewritten overnight. It became obvious: Rock and classical pair well together, so much so that, 40-plus years on, it's tough to beat a full symphony orchestra interpreting rock songs and suites in a concert venue, either in support of a live band or on its own. This is exactly the kind of mashup delicacy our St. Louis Symphony Orchestra dishes up this spring, beginning with Music of Queen.

Queen's music was always a strutting, self-consciously over-the-top thing, but most of the heavy lifting had to be done by Brian May's incredible guitar playing (artfully overdubbed for maximal soundscaping). On Friday, May 31, the SLSO marches out the full ersatz pomp of Queen's songbook in renditions of familiar material such as "Bohemian Rhapsody" and "Another One Bites the Dust." But what we're really hoping to hear is "Tie Your Mother Down"; to behold an entire symphony orchestra amplify May's beautiful beast of a riff would be worth double the value of Freddie Mercury's queenly estate.

The very next night, Saturday, June 1, the SLSO presents Music of Pink Floyd. Complemented by an eight-member rock band, the musicians of our top-tier hometown orchestra go exploring in the Floydean realm. Selections from Dark Side of the Moon and The Wall, among others, will be played. Pink Floyd famously used a full orchestra (with, frankly, mixed results) on its 1970 LP Atom Heart Mother; however, 1979's The Wall was, for our money, the best-realized and most musical synthesis of Pink Floyd's rock instrumentation with occasional orchestral accents. If you mention that album's "Comfortably Numb" to most people, they'll immediately think of David Gilmour and his two famous, knockout guitar solos, but it's arranger Michael Kamen's sublime string chart that provides the runway from which Gilmour's Strat takes off into the blue.

Finally, one rock album in particular proved definitively that there was more, much more, to the music than just guitars/bass/drums and stock blues-derived chord patterns — a certain 1967 long player by the Beatles. On Friday, June 28, the SLSO honors this milestone recording with the 45th Anniversary Celebration of Sgt. Pepper's Lonely Hearts Club Band. Classical Mystery Tour joins forces with the symphony to interpret what's inarguably the most famous, and arguably the most ambitious, rock album of all time. Lennon and McCartney, with the priceless assistance of George Martin (as gifted an arranger as he was an audio producer), expanded their sonic scope immeasurably on Pepper's key tracks. Try to imagine "She's Leaving Home," "Being for the Benefit of Mr. Kite" or "A Day in the Life" without the enlarging qualities of their respective orchestral arrangements. You can't; it's like looking at a Van Gogh in black and white.

Just as nature arranges fresh sights and sounds to signal the beginning of summer, so does the annual Missouri Chamber Music Festival each June. This year's festival features the music of classical composers Franz Schubert and Igor Stravinsky, with additional arrangements from composers Henry Purcell, Carl Nielsen, Ástor Piazzolla and a world premiere of Amy Beth Kirsten's Kiss to the Earth. Selections from Schubert include Fantasia for Piano 4 Hands and Octet in F Major, and famous works from Stravinsky such as The Rite of Spring and The Soldier's Tale — the latter is accompanied with a dance performance from the Missouri Ballet Theatre. Get lost in the rich, layered sounds of violin, cello and bass strings singing beside piano keys and blasts of bassoon, trumpet, French horn and percussion at each performance, and feel the power and awe of some of the world's most cherished classical songs. The festival is staggered over three evening concerts at the First Congregational Church of Webster Groves (10 West Lockwood Avenue, Webster Groves) on Thursday, June 13, Saturday, June 15, and Monday, June 17. Ticket prices range from $20 to $35. For more information, call 314-882-0053 or visit www.mochambermusic.org.