Roger Waters' musical help on The Wall has ties to St. Louis 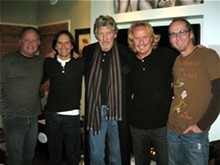 Roger Waters' musical help on The Wall has ties to St. Louis

With this year's mammoth, 30th-anniversary tour in honor of the release of The Wall, former Pink Floyd mastermind Roger Waters is thrilling many classic-rock fans. The tour has been an ace in Waters' back pocket that he has held onto for nearly 25 years: His 1987 settlement with his estranged Pink Floyd bandmates gave him the rights to The Wall concept, while his former band retained the rights to continue touring underneath the Pink Floyd name.

Launched in mid-September in Toronto, the tour has already been named by Billboard as one of the top ten fall tours. Like George Lucas and the Star Wars movies, it seems that 30 years later, technology finally has caught up to allow Waters to present The Wall as it's never been seen before; both the visuals and sound are stunning.

There's a local tie within The Wall tour, too: Three out of the four background vocalists touring with Waters have St. Louis roots within their family tree. During a conversation with vocalist Kipp Lennon — who's touring with Waters along with his brother Pat Lennon and cousin Mark Lennon, who also play together in the California-based band Venice — he revealed that those St. Louis ties run deep. In 1917, his grandfather, Bert Lennon (a St. Louis newspaper reporter), initially met Betty Heinrich, his German dancer and bride-to-be here in St. Louis. We took a moment to explore those St. Louis connections and gathered plenty of details about the Waters tour.

Matt Wardlaw: From the liner notes of the Venice album Born and Raised, I'm aware that there's some St. Louis history in your family tree, so I figured I would start off by asking you about that.

Kipp Lennon: Doesn't everyone's family have a connection to St. Louis at some point? [Laughs] That's why they built the Arch, isn't it? I have a connection now especially in St. Louis, because I have about 50 members of our family living in Branson, Missouri. So I go visit them about once a year if I can, sometimes more, and St. Louis has become a big meeting place for our family. A bunch of them are going to come up when we play with Roger, so I'm looking forward to that. In fact, we have a day off right when we get there, so that will be nice.

Having had the opportunity to see an early date of the tour, I was really floored with how massive this show is. It really is an unbelievable stage production. What's the daily setup time like, as far as the amount of time required to get the staging ready for each show?

Well, they only have one stage going at once. A lot of people ask, Are they setting up in two cities at once? But they're not. They've got it all so that if they have to, they can arrive at 3 a.m. the day of the show, and it's ready by showtime. They don't want to have to do that all of the time, but they mostly do that.

To be honest, the crew, it sounds like a cliché, but the crew is the star of the show, really. They're hired to schlep all of the stuff from town to town and put it in the trucks and get it going. When we're done with a town and we're done with the show, they're there until two or three in the morning tearing it all down and loading it all up into 21 huge trucks. Then, when they get to the town, they have to set it up, and sometimes they get a few hours of sleep on the drive over. Then they have to set it all up starting at literally three in the morning in the next town and by show time have it all ready to go. And then, they're part of the show, they aren't done, because they have to assemble the wall throughout the show. Most tours, once the guys have set up the stage, other than maybe the guitar techs, front of house and lights, everybody else can crash.

These guys are literally like a ballet from our standpoint. [We're] watching these guys with their headphones [as they communicate], "And now we wait for this verse, and then you set up this brick, and now you go up this elevator, and you set up these five bricks." "Now, wait, wait, wait and walk across and set up that brick." It's all choreographed with the projectors out there in the audience — precise projectors for each brick, and everything is to the millisecond.

Seeing this production of The Wall, it's very apparent that Roger Waters is like the mad scientist who finally has the technology that he's been wishing for all of these years to do what he wants to do.

It's exactly like that. Now he can finally bring to life what he's imagined along the way. What I love about working with him is that he's one of these guys who doesn't have this type of pride where he feels like he has to do everything. He's not afraid to delegate as long as he has he's got the overall approval on things. He surrounds himself with really talented people, old people and young people. He uses people that he's trusted for decades, but then he's not afraid to go, "This graphics design guy is really cool; I'm going to use this guy."

Sean [Evans, the tour's video content creator and director], he's a young guy that was a graphic-arts guy working for, I think, a record label, and Roger just liked his sensibilities and the way he works. When they started to do The Wall, he called him and said, "Look, I'm doing this, I want you to help me flesh out my thing." And this guy is unreal — Roger would basically say, "Here's what I want," and then Sean would do it. Like for instance, the airplanes flying over, the bombers, that was Roger who said to Sean, "Give me something beautiful here that would really work."

And then Sean comes up with the idea of these incredible bombers with an almost anime-looking, really opaque kind of art [that's] really cool. And then the genius of having worked together is that then Roger would say to Sean, "OK, that's great, but it has to mean something, so let's have all of these symbols dropping off these planes." And then Sean takes that and turns it into what you saw, which is beautiful.

[Sean] has a crew under him of all of these young computer graphics people that carry out whatever he wants to do. It's been a pleasure to hang out with all of them and see how all of this stuff works and how they carry out what Roger wants. It's fantastic and really amazing.

Jump to comments
« Post-Oscar win, Ryan Bingham follows his own muse on Junky Star   |   The Dresden Dolls' Amanda Palmer celebrates the band's tenth anniversary and a reunion with her bandmate, Brian Viglione »