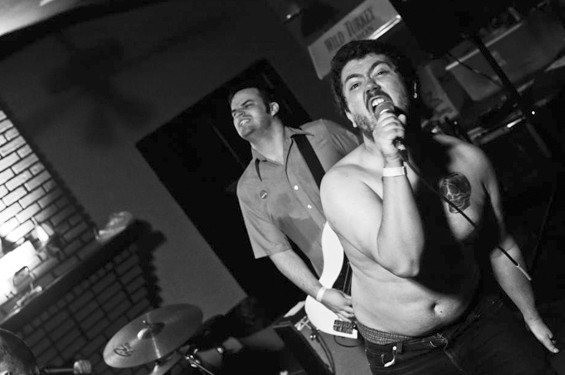 Shaved Women's Ben Salyers: "I assume that people relate to what I have to say."

It's Saturday night in a nondescript south St. Louis basement, where 30 or 40 hyperactive punks whose ages range from their late teens to mid-thirties are talking and drinking, anxiously waiting for a band to play on the concrete floor. Dumb jokes and heckles are exchanged between the crowd and the band as its members finish setting up and tuning their guitars. The drummer counts off four clicks on his sticks, then a lanky, leather-jacket-clad young man jumps backward into all of his friends as the first song kicks into overdrive with a fast-and-crunchy distorted bass line. This sets off a chain reaction of rhythmic yet chaotic tribal activity wherein the group of young men and women (all of whom seem to be either intoxicated, uncoordinated or just plain angry) shove one another across the room and collide haphazardly, catapulting their bodies off the chainlink fence lining the walls. A sweaty, shirtless man with skulls tattooed on his chest and a microphone in his hand lurches toward the teeming crowd, screaming along with one of the loudest, meanest-sounding bands St. Louis has ever produced. The bassist jumps off of his amp, lands awkwardly on his back and begins gyrating on the beer-soaked basement floor while playing.

Most people use their basements for storage. Most people don't like to hang out in said basements with drunk strangers. Most people are not Shaved Women. If you've made your way to any of the local DIY spots since the end of 2009 to see a basement pulverized in this fashion, you probably already know that Shaved Women is one of the best, hardest-working hardcore punk bands St. Louis has to offer. The eyebrow-raising name comes from a song title by anarcho-punk forefather Crass. It is raw and impolite and perfect for the in-your-face punk band. The music would make a great soundtrack for breaking out of a mental institution by slamming your head through the walls.

"Our main focus is on writing the best songs possible," says vocalist Ben Salyers. "As far as lyrics go, I just write about my experiences and how I deal with them. Not really trying to get anything across, but I assume that people relate to what I have to say on some level and enjoy the tasty jams."

Taking influences from bands like Black Flag, Drunks With Guns, Jesus Lizard and its singer's view on reality, Shaved Women consistently concocts hard-charging, aggressive punk rock that is somehow capable of getting stuck in one's head for days at a time. The band has released a self-titled LP on Chicago's Rotted Tooth Recordings, the Static EP on Pass Judgment Records (also based in Chicago) and a new self-titled EP through local Apop Records, where Salyers also works.

"As of right now it is only available at Apop Records' physical and online stores as well as through us. However several distros will be getting copies in the coming weeks," he says of the new EP.

The dues have been paid, and for once it's actually paying off. "It's pretty weird," Salyers says of the recent success. "With the exception of Tom [Valli, drummer], none of us have ever been in a band that people really care about before. Being in bands that generally get ignored, you think, 'One of these days people are going to care about my tasty jams, and things will be different then.' As it turns out things aren't that much different. The only upside I've noticed is that we don't have to pay out-of-pocket for things as much, and it's easier to book a tour. With any luck we'll be able to milk this for all it's worth."

Shaved Women has broken past the local punk-rock cliché wherein a band releases a demo, exists for one or two years and then breaks up. In addition to the multiple vinyl releases, the band has toured outside of the Midwest, garnering fans for itself in foreign lands and even playing a tight set on New Jersey's legendary WFMU (91.1 FM) radio station.

"Over at Apop we listen to a boatload of WFMU," Salyers says. "I noticed that we got some airplay and positive response from some DJs. One DJ in particular — the all-around professor of madness known as William Berger — seemed particularly into our tasty jams. I sent him an e-mail when we were booking the tour, and he was more than happy to set aside some of his time to record us for his show. This show was a major highlight of the tour for all of us, and we can't thank William enough."

Shaved Women's driving work ethic doesn't come from a perspective of wanting to "make it," which is virtually never the stated goal of a DIY hardcore band; it comes more from a perspective of artistic tension release, which is reflected neatly through Salyers' creepy, menacing growls, Chris Eck and John Birkner's stringed-instrument-based punches to the brain and Tom Valli's rhythmic earthquake drumming. It is the kind of music that can cause seemingly otherwise reasonable people to stop midconversation and begin recklessly slamming into friends and strangers as soon as the band takes the stage (or, more likely, floor).

The band, who in the past could be found as an opener for nearly every great DIY hardcore show in town, has plans to scale back local appearances. "We're going to try to keep it to one local show a month, max. Although we will break that rule if a band one or more of us are nuts about comes through and we are able to weasel our way on to the bill." Salyers and guitarist Chris Eck have spent the last few years booking shows for some of the best punk bands in the country, so that hypothetical is likely an inevitability.

"We are planning on doing some Midwest dates around Memorial Day weekend and a week or so in the South in early fall," Salyers says of the band's upcoming plans. "Our only upcoming local show is with Church Whip [members of popular new-wave revival band Merchandise] on February 11 at Plush with Rat Heart."

Salyers is optimistic about the state of the local DIY scene, with one caveat. "People who aren't in bands should start bands," he says. "If you are in a band that does not suck and want to play shows, e-mail me at [email protected]."

Jump to comments
« Punk Princes of Jazz: The Bad plus is not a cover band   |   So Many Dynamos Celebrates Ten Years at Off Broadway »