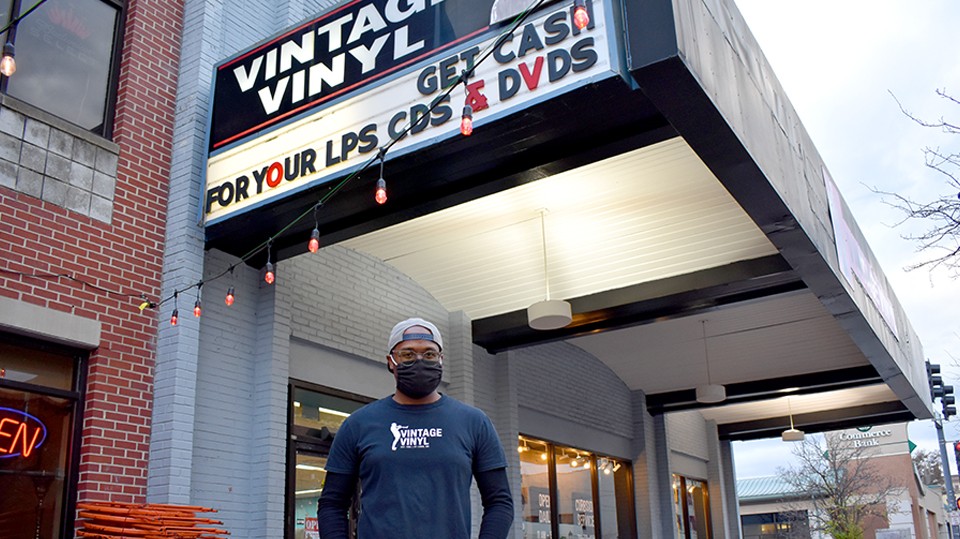 reasons for spending your money where you live have always been good. The quality of what you buy is often better than what you'd get at Walmart. You are protecting what makes St. Louis unique. You are supporting your neighbors.

We've always known all of that. But it feels more urgent now. Virtually every small business you love, if you were to talk to the owners, you'd find they are fighting off catastrophe. You probably know some that have closed already, but we don't yet understand how many others are at the edge. Businesses that have tapped every resource in hopes of outlasting the worst of the pandemic are reaching the limits of the ingenuity and ferocious spirit that have kept their doors open this long. Congress remains gridlocked on a new stimulus bill, sitting on the life preserver that could keep untold numbers of small businesses open and people employed.

The only thing left is all of us. Yes, we've always known it's good to spend our dollars in our neighborhoods. It's one of the reasons the RFT publishes a Shop Local issue. But this is the year, more than any other in generations, when it is absolutely critical. If you want St. Louis to be more than a collection of chain stores and empty storefronts on the other side of this pandemic, these businesses need your help now. In the pages that follow, you'll find profiles of a few to get you started. They're part of what we love about this town. Think about what you love, and visit those, too. They've got cool stuff, just waiting for you. But they won't be able to wait forever.

Orlandez Lewis, marketing and promotions director for Vintage Vinyl (6610 Delmar Boulevard, 314-721-4096), has seen the videos and read the horror stories. Retail workers across the nation berated and harassed by frothing vectors of disease for the simple act of attempting to enforce simple mask mandates. Grown men and women throwing absolute toddler tantrums about being asked to do the easiest thing in the world to help keep people safe as a virus rages out of control. In some cases, even outright violence.

He's seen plenty of that incomprehensibly selfish behavior, sure. Just not in his store.

"We haven't really come across any kind of problems or anything like that with customers," Lewis says cheerily. "People have been more than compliant, and more than willing to shop and be safe, just like us."

After a pause, he offers a potential explanation for Vintage Vinyl's good fortune in this regard.

"I think it might be the music," he says. "Because we do say, our motto is: 'Music is the healing force.'"

Ever since the beloved record store that has served as an anchor in the Delmar Loop for some 40 years reopened its doors in June after COVID-19 forced them closed in March, Lewis says things have been going surprisingly well, all things considered. Its pandemic safety measures — which include plexiglass dividers at registers, mandatory masks, enforced social distancing and frequent sanitization — have been well received by the store's loyal customers.

"Surprisingly enough, there's been a really good abundance of people who are still wanting to get out — following safety precautionary measures of course," Lewis says.

Part of that, he reasons, could involve the airing of Papa Ray's Vintage Vinyl Roadshow on the Nine Network back in August. A documentary focused on the independent record store as a cultural entity, with Vintage Vinyl owner Tom "Papa" Ray playing host, the show was a hit, Lewis says, and brought customers flocking to the store.

"The first airing went great. We had tons of people coming in afterwards who were just like, 'I saw you guys on TV,' and you know, such a great response," Lewis says. "And we actually have the DVD for sale of that first episode for customers to buy. But it really went awesome. There's tons of people still coming in and talking about it. There were even some people coming from out of town who said they've seen it as well. So it's been getting a really good reception."

Additionally, the store has rolled out an impressive revamp of its website, vintagevinyl.com, that encourages online ordering. Those items ordered through the web can then either be picked up via the store's curbside option or, if preferred, customers can opt to have them shipped right to their door.

"The website's going pretty great; it's getting a really good response," Lewis says. "Tons of people are using it. It's definitely been a great alternative for people to have as opposed to those who still don't really feel comfortable going to places or coming out to places."

In a year that has been an absolute nightmare across all industries — and in some ways especially retail — Vintage Vinyl seems like a rare story of success. Credit that to its status as a bona fide local institution, to its adaptability in the face of adversity, to its stellar safety precautions (Lewis notes with pride that the store has seen no coronavirus cases among its staff) and yeah, to its recent appearance on television.

But maybe Lewis is also just right about the power of music to heal, especially when illness seems otherwise inescapable.

"When people come in here, there's no kind of hostility or anything like that," Lewis says. "I think everybody's just here for the main purpose to somewhat escape and have some kind of comfort during these trying times."

It is a Monday evening in November, and after eight months of silence, the sound of breathing is once again echoing inside a yoga studio in Old North St. Louis. Before the pandemic lockdowns, the studio's wood-paneled floor could fit as many as 40 students at a time. Today, the class numbers just five.

Alonzo Nelson walks back and forth between his socially distanced students. He walks by a young boy, the son of one of the students, who is playing on an iPad near his mother's mat. The temperature for the class, marketed "Power to the People," is set to a toasty 80 degrees.

Nelson's voice is soft but direct. A schoolteacher by profession, his pace is that of a drill sergeant. After leading the class in some breathing exercises, he gets to the real stuff:

"Inhale, halfway lift," he begins, watching his students bend into their poses. "Exhale ... now walk those hands to the front of the mat, good ... high plank ... lower yourself down ... up dog, lower yourself down, press up and back into down dog ... inhale."

By the end of the hour-long class, the students are sheened in sweat, but they're laughing as they shake and stretch out their limbs. It's a moment of almost-normalcy, a rare thing at a time when a coronavirus surge is threatening to once again shut down yoga communities like Collective STL (1400 N Market Street, 314-200-5796).

But for Nelson, who co-founded the nonprofit in 2017, this is a moment he's yearned for.

Nelson, a high school math teacher in the Metro East, met his future fellow co-founders of Collective STL in a yoga teacher training course. He remembers bonding with the three Black yoga teachers over their shared love of the practice, but they also shared the feeling of alienation in those same spaces: It was the feeling of walking into a studio and realizing they were the only Black person there. Through Collective STL, Nelson, Melinda Oliver and the married duo of Terry and Ericka Harris united around a shared hope: to bring Black people in St. Louis to yoga.

To do that, Nelson says they had to strip away the alienating pressure that followed Black yoga practitioners in mostly white spaces. The next step was offering classes on a pay-what-you-want basis and providing free mats and equipment to anyone who showed up.

"We first need to give them a space where they don't have to prove themselves. So, check: All your teachers are Black," Nelson says. "Then we removed all the barriers. We gave them a space, and we gave them everything they needed to practice. All they had to do is bring their bodies."

But in the summer of 2020, St. Louis' Black yoga community wasn't just contending with the virus its students might inadvertently bring into the studio: There was the mental and emotional weight of police violence, as protesters filled the streets in St. Louis and across the country in response to the police killings of George Floyd in Minneapolis and Breonna Taylor in Louisville.

On streets and livestreams came the cry, "I can't breathe."

By July, Collective STL had moved its weekly yoga classes to Zoom streams and the grassy lot next to the studio. But the group didn't want to just get by with replacing their regular programming.

"We're all living through a pandemic, and we're all impacted and affected by that. We have witnessed these murders via social media, we're feeling the effects of that too," notes Ericka Harris, a Collective STL co-founder and longtime yoga instructor.

In July, the group launched a five-week series of public yoga events. They called it the Just Breathe Summer Series, and from its start at the Missouri History Museum, the event eventually attracted hundreds of people to the wide grassy area beneath the legs of the Gateway Arch.

There, first-timers practiced yoga alongside veterans. The event drew families and singles, the old and young. For Harris, the event showed just how far St. Louis' Black yoga community had come – and how they could come together to heal.

"We needed to create space for people to just breathe, to create a space to feel and process these feelings. That was very intentional," she says. "Sometimes, we don't realize how much we need to slow down and be still; we don't realize what we need until we actually access it."

Harris acknowledges that they can't predict what the near future will bring for the studio, which restarted its in-person classes the same week that local officials in St. Louis warned that coronavirus trends could soon send the city into yet another lockdown.

But even if St. Louis finds itself quarantined once again, the Black-led yoga classes at Collective STL will continue, whether that means more outdoor events (weather permitting) or moving back to livestreaming classes.

"Our mission is to bring yoga to Black people," Harris notes. "Even if we have to shut down the studio and do that on Zoom, that's something we can continue."

For more info on Collective STL, check out thecollectivestl.org. Yoga classes are open to all. All sign-ups are made through the Collective STL app, available on Android and iPhone. Although classes are free, donations of $10-20 per class are suggested for those who are able.