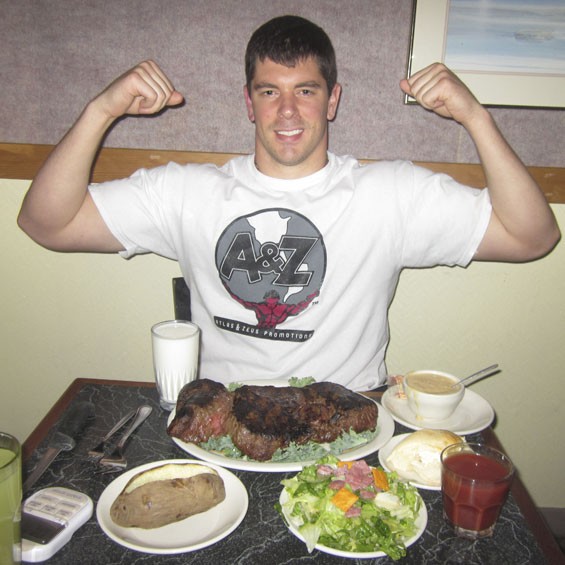 Assessing what remains of Randy Santel's steak, reduced from a 72-ounce slab to a collection of square-inch bites, manager Mike Hamman of Seattle's Wedgwood Broiler signals a server to fetch the cook who'd grilled the "Winner's Dinner" sirloin.

"Get Isaiah," he hisses, too quietly to disturb Santel, chewing in rhythm to the Dixie Chicks tracks on his mp3 player.

When the cook arrives in the back dining room, he knows he has lost. All the money in the kitchen was riding on Santel becoming the first person ever to complete the 47-year-old restaurant's hourlong eating challenge: Only the cook who had handled the massive steak, imagining the stresses it might inflict on a practiced jaw and iron gut, had bet against him.

On the night of May 5, Santel demolished the steak, baked potato, salad, roll, cup of soup, glass of milk, glass of tomato juice and dish of vanilla ice cream in 41 minutes and 46 seconds. The following day he traveled to Tacoma to attack a six-pound burrito, the sixth food challenge he attempted during his three-day visit to Seattle.

A former Missouri State University offensive lineman, Santel in 2010 won a Men's Health body-transformation contest by dropping 25 pounds in two months. Santel, now 25, had long struggled with his weight, joining Weight Watchers as a fifth-grader and nearly being left behind on a Boy Scout sailing trip because he was too heavy for the boat. But the contest — which culminated in a trip to New Zealand to film an episode of Spartacus, Starz's gladiator series — left him with a newfound reverence for his metabolic system. He and a friend took on the 28-inch "Pointersaurus" at Richmond Heights' Pointer's Pizza and won $500; Santel had eaten most of the pie.

"My metabolism is not always going to be like this," he concedes. In the meantime, he's stalking restaurant challenges across the United States, his range limited only by construction gigs and a girl back home. "It sucks I'm not single," says Santel, who wants to complete challenges in all 50 states. "Not that I want to break up with my girlfriend or whatever, but I'd like to move out West."

The highest concentration of eating challenges is in California. Wedgwood's challenge dates back to the restaurant's opening, a few years after the Big Texan Steak Ranch in Amarillo littered Route 66 with billboards promising a free 72-ounce steak dinner to anyone who could finish the meal in an hour. But the finer points of eating the giant steak at Wedgwood haven't changed much since they were devised under the original owner, Albert Balch.

When contestants request fries, the kitchen has to cut them for the occasion, trying to approximate the volume of a baked potato. ("We haven't had steak fries in 25 years," owner Alycien Cockbain says of her regular menu.) Santel opted for baked, reasoning he eats enough fries on burger challenges. His Seattle trip brought his successful-challenge count to 100. He's failed four times, but he blames his ego and sneaky owners who can't resist piling six pounds of chips alongside a publicized three-pound sandwich.

Although Santel has set records across the nation, he hasn't had to deal with carpetbagging charges. "Restaurants like it, because if a challenge goes [undefeated] for so long, people start thinking you can't beat it," he says. "This gives all the testosterone-filled guys the idea that they can do it too."

Because Santel's eating trips are currently funded by the cash prizes he wins on the challenge circuit, he's hoping to transform restaurants' appreciation of his services into sponsorships. Other than Travel Channel personality Adam Richman, Santel is the only competitive eater focusing exclusively on restaurant challenges. And, as Santel points out, Richman's notched a mere 37 wins in three years.

Santel has never entered a Major League Eating contest because the officiating organization forbids its participants from entering mom-and-pop contests, and Santel isn't interested in a never-ending schedule of hot dogs and chicken wings.

Very few eaters attempt Wedgwood's challenge, which is only advertised via a small plaque in the restaurant's lobby: Cockbain, who always serves the challenge meals, estimates one eater a year might take the dare. (Seattle Weekly editor and former Riverfront Times scribe Mike Seely made an unsuccessful attempt in 2007.) Most eaters make it through about 56 ounces of meat, usually pleading jaw pain when time expires.

There are steak strategies, Santel says. "I told them to give me a really sharp knife," he says. "And make sure you're on a sturdy table, or the water's going to go everywhere." Water isn't a required element of the Wedgwood challenge, but Santel finishes four glasses of lemonade during his attempt. He also uses liquid as a training tool, stretching his stomach with twelve pounds of watermelon and a half-gallon of water. "You can drown yourself and get hurt," he warns. "But a hell of a lot more people have died in marathons than eating challenges."

Santel dispenses eating wisdom during challenges, which he videotapes and condenses for his website, randysantel.com. He prefers to attempt a challenge in a crowded room, but in an unknown city like Seattle he makes do with a few servers sticking around after their shifts and a half-dozen restaurant regulars from the neighborhood. Even his traveling buddies didn't make the trip to Wedgwood from their hotel.

When Santel sits down to his steak, he has already knocked off a one-pound doughnut challenge and a ramen challenge earlier in the day. "I wouldn't say I'm hungry, but I've got room to eat," he says. Before lifting the fork he has brought with him, Santel strips off a shirt promoting his website to reveal a red muscle shirt reading "These aren't guns: They're cannons."

Talking directly into his camera, Santel says, "Only good things are going to happen."

Before the challenge begins, Santel predicts he'll finish in twenty minutes, which is about how long it had taken him to polish off an 87-ounce steak in New York. At the 25-minute mark, however, he acknowledges his forecast was off. "I think it's been 25 minutes because it's very hard to cut steak and eat it," he says.

Spectators aren't clear on exactly when to cheer. Are there certain chews or knife maneuvers that would thrill a challenge-eating follower? But when the steak is gone, everyone applauds.

He starts in on the salad, then devours the roll. He downs the soup and milk, saving the tomato juice for nearly last. "I'm not a big fan," he says. "But hopefully, Wedgwood Broiler's is good." He drinks the juice in one gulp. "That was delicious," he says.

A cup of ice cream later, Santel becomes the first eater ever to complete the challenge. Hamman returns his $75 cash deposit, but there aren't any plans to post Santel's picture on a wall or reward him with a lifetime of free martinis.

"He goes, 'You don't have a T-shirt for when I finish?'" Cockbain said before the challenge, as Santel was arranging the plates and cups on his table. "I said, 'We've never had anyone finish. I'll have to make it up and send it to you.'"

Jump to comments
« Plush is the most ambitious drinking, dining and dance establishment St. Louis has seen in a decade   |   Built to Suit: BrickTop's is based in Nashville, but it hits home at Plaza Frontenac »