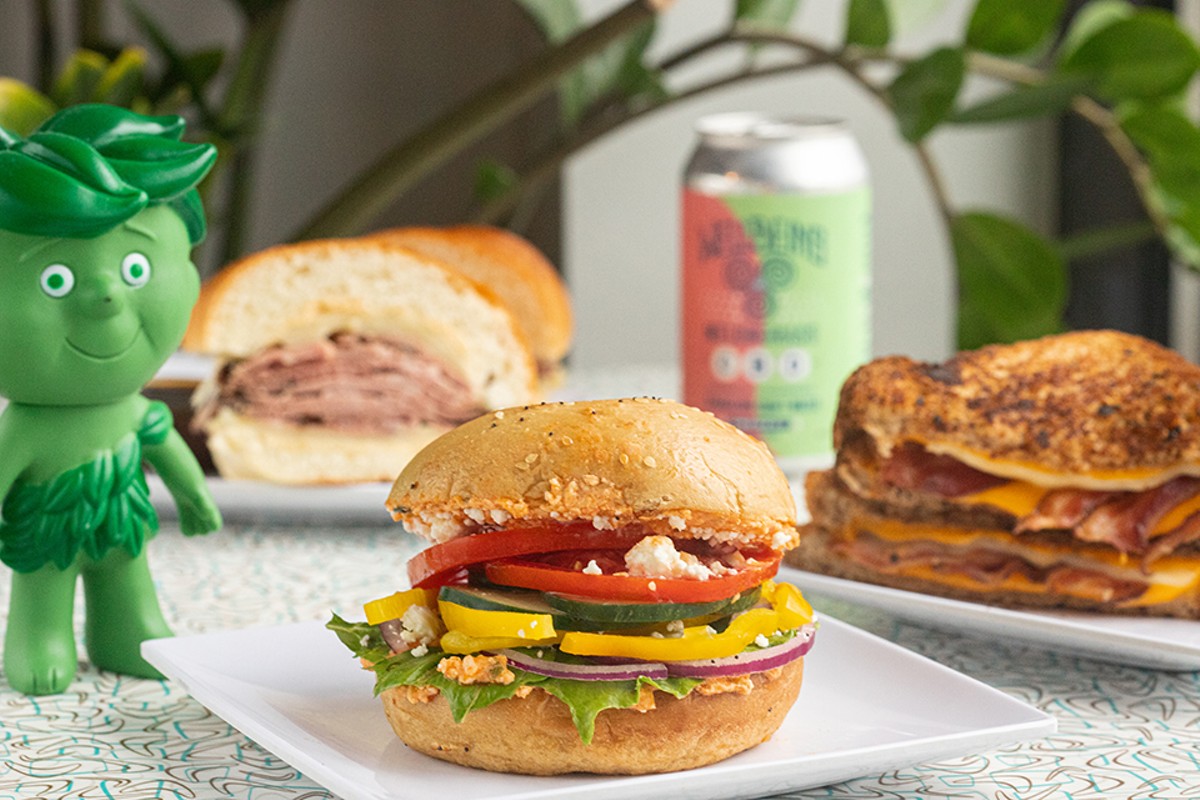 The You Don’t Eat No Meat sandwich might be the best, but is far from the only, reason to visit Sisters Sandwich Shoppe. MABEL SUEN

Ever since they opened their coffeehouse, Espresso Yourself Coffee & Café, Tracy Calabro and Jules Karagiannis heard the same refrain from their Southampton neighbors: This area needs a deli. For three years, guests would not only lament the lack of a neighborhood sandwich shop, but also give Calabro and Karagiannis the backstory on why they were so adamant. Just a couple of months before Espresso Yourself moved into the storefront at Macklind and Devonshire avenues in 2018, the neighborhood did have a sandwich counter, Macklind Avenue Deli, but it burned down and never reopened. It was a clear void in an otherwise vibrant commercial district, and one that got Calabro and Karagiannis wondering if they might be the right people to restore sandwich glory to the area.

Initially, Calabro and Karagiannis told themselves they could not take on such a project. Espresso Yourself was already a full-time job for Karagiannis; for Calabro, it was a nearly full-time gig on top of her already 40-hour-a-week day job. However, the more they told themselves they couldn't do it, the more they kept wondering, deep down, if they could. Eventually, those thoughts got the better of them, and when the storefront adjacent to their coffeehouse became available in early 2020, they decided it was the sign they needed that this was what they were supposed to do.

Calabro and Karagiannis certainly had the food background to draw upon. Having married into a family of Greek restaurateurs, Karagiannis spent years in the business as the co-owner of the Tenderloin Room at the Chase Park Plaza Hotel. Though she brought significant hospitality experience with her, she and Calabro were clear that they wanted their new venture to be a low-key neighborhood spot with interesting sandwiches, soups and salads. After tossing around ideas with their children, they nailed down a menu, knocked down the wall between Espresso Yourself and the adjacent storefront, and christened their deli as Sisters Sandwich Shoppe.

When Sisters Sandwich Shoppe opened in April of this year, the Southampton neighborhood came out in full force to support the deli they'd been waiting for. However, it's not just demand for a sandwich counter that fuels the restaurant's success. Sisters is a delight the moment you step in the door and experience its charming vibe. Calabro and Karagiannis describe the aesthetic as retro vintage, using the period from 1965 to 1985 as inspiration. Formica tables with '70s-style floral pleather chairs, a turquoise leather sofa and cool vintage knick-knacks gathered from their childhood home (think E.T. and Smurfs lunchboxes and an Alf statue) give the place the sort of nostalgic thrill you get from going through your old things in your childhood home's basement.

However, you could be eating your sandwiches inside of a beige, windowless room and still find the Sisters experience thrilling. Calabro and Karagiannis have put their hearts and souls into making the food they provide the sort of accessible fare you'd expect from a deli, but with special touches that make their offerings unique. You understand what they are going for when you bite into the aptly named Don't Be Basic, an overstuffed turkey and provolone sandwich dressed up with verdant pesto and juicy tomatoes on griddled sourdough bread. Like a combination of a turkey and cheese melt with a caprese salad, this sandwich is easy and warm, but it has enough interest to stick with you. 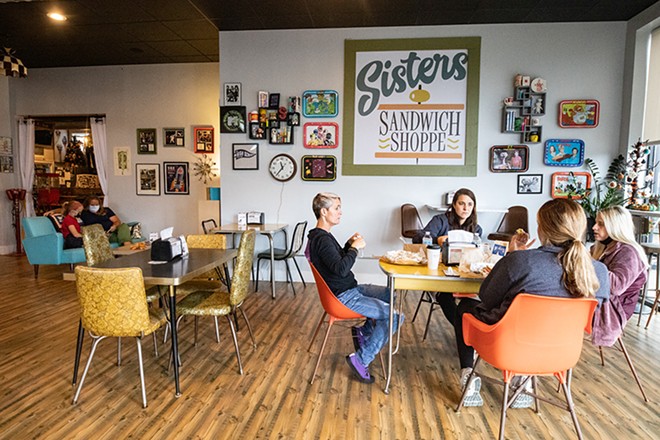 The Celine Dijon is another instance of Calabro and Karagiannis adding a little extra to a classic dish. In this case, chunky, white-meat chicken salad is tossed with Dijon mustard and a touch of hot sauce to give it a piquant punch. Tucked into a crusty hoagie loaf, it's the only chicken salad around that leaves your mouth tingling.

The Gabagool, Sisters' take on an Italian sub, is shocking in its heft. Roast beef, salami and capicola are piled onto a hoagie with provolone cheese, lettuce, tomato, red onion, pepperoncini and pickles, then drizzled with Italian vinaigrette. Trying to get your mouth around this massive behemoth is a feat worth the effort.

The Bacon Me Crazy is equally impressive in size. Though it does not break the mold of the classic BLT, the mix of perfectly cooked bacon, thick-sliced tomatoes, crisp lettuce, a generous heap of rich mayonnaise and sourdough bread toasted to a flawless golden hue make you understand why you don't mess with perfection.

You might think that the Au Jus Shouldn't Have is a quintessential French Dip — and in many ways it is with its piles of roast beef, crusty hoagie bread and au jus dipping sauce. However, there is something about the way the molten cheese mixes with a garlicky red-pepper dressing that makes it a gooey, cheesy wonder. When dipped in the mushroom-infused au jus, it becomes clear that this is no mere copy of a classic, but something extraordinary.

The same can be said for the Cheez Louise. Calabro and Karagiannis take a regular grilled cheese — American and provolone cheeses, white bread — as a jumping-off point, then fill it with bacon and garlic butter to kick it up to eleven. Their Sisters Sammie, too, starts out as fried bologna and cheese, but the addition of Red Hot Riplets not only gives spice and crunch, it turns it into the most St. Louis of sandwiches you can find.

As wonderful as all Sisters' offerings are, the You Don't Eat No Meat is the shop's clear must-try offering. Calabro and Karagiannis begin with a glorious everything bagel from Bridge Bread (seriously, this is an actual bagel and not the airy, circular-shaped garbage that is so often passed off as such outside of NYC), then top it with tomatoes, red onions, yellow peppers, cucumber, lettuce, feta cheese and balsamic vinaigrette. The component that turns it into absolute transcendence, however, is a sundried tomato and feta cheese spread; it mixes with balsamic dressing to form this funky, earthy, tangy orange sauce that you want to order a side of and eat with a spoon. It will blow away even the most unapologetic meat-eater.

That veggie sandwich alone is reason enough for Sisters Sandwich Shoppe to be in the world; had the Southampton neighbors known Calabro and Karagiannis were capable of such sandwich-making majesty, they might have held a vigil outside their storefront when they first came to the area three years ago. Fortunately, these sisters came to that realization without such drastic measures — and we are all the better for it.