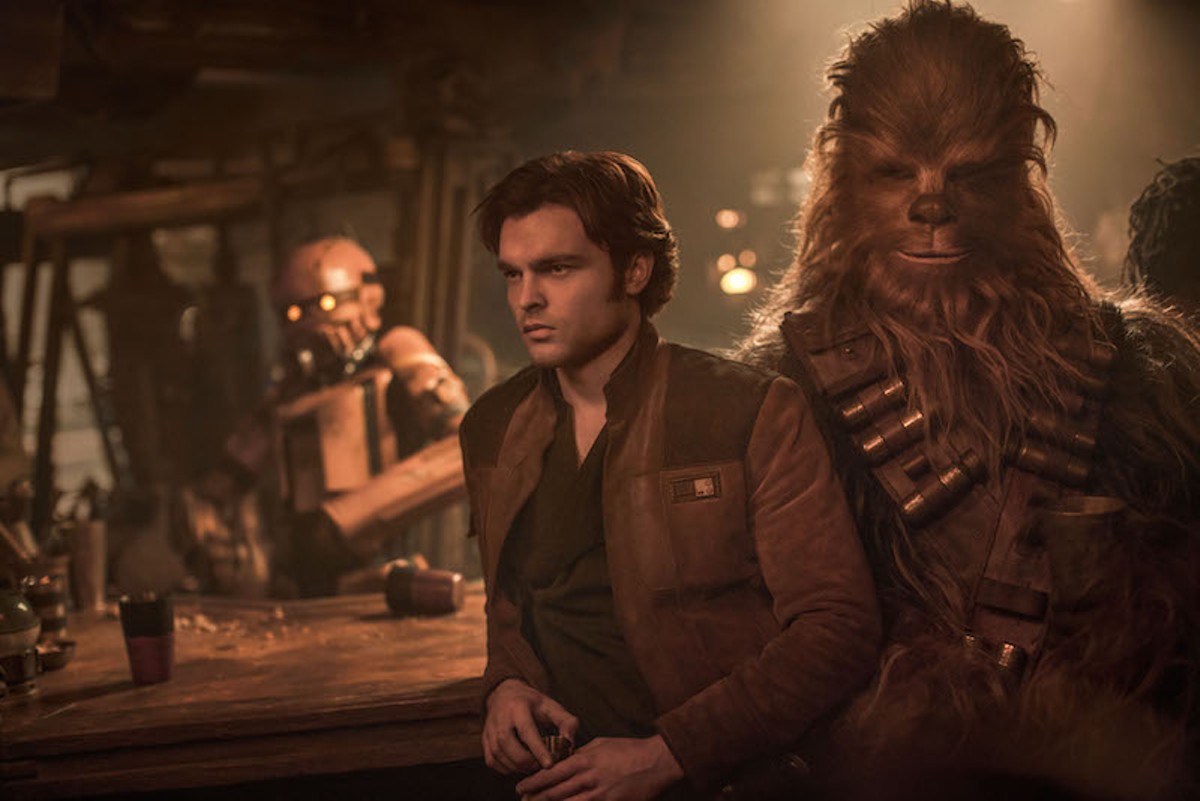 Han and Chewie (Alden Ehrenreich and Joonas Suotamo) hang out at a bar.

The behemoth operating under the collective title of Star Wars has evolved and expanded over four decades, pulling along a substantial portion of the entertainment industry in its undertow. It began benignly with George Lucas' 1977 film, a gently clumsy, nostalgia-fueled pastiche of earlier cinematic pleasures both high (Kurosawa, Hawks) and low (Flash Gordon Conquers the Universe). Over the next seven years, Lucas (having wisely turned the writing and direction over to more accomplished hands) continued to shape his story into the centerpiece of a media empire. When he returned to filmmaking in 1999 for the first of a trio of generally disappointing prequels, the movies themselves seemed almost marginal, just one product among a sea of toys and books and games.

When Lucas sold the franchise to the Walt Disney Company in 2012, a new model for future Star Wars films was formed, one closely in step with the sequel-generating comic-book corporate empires that dominate today’s film industry. Releases now include two sequels to the original sextet in which the now mature Luke, Leia and Han take their bows, and two stand-alone films set around the periphery of the 1977 movie, the product of a well-regulated entertainment factory, pieced together fan-boy trivia and the collective memory of their predecessors. They aren't meant to provide a coherent or even an enjoyable narrative (and they don’t). They're a combination of ritual and smorgasbord, a catalog of generic effects that play to the audience's nostalgia for the earlier films without challenging it.

Solo: A Star Wars Story is the latest of what will probably be a full line of spin-off films about the central characters, and it's set roughly ten years or so before its eponymous hero met up with Luke Skywalker. For those who have been wondering just how the wise-cracking hero met Chewbacca, how he acquired the Millennium Falcon or if Han Solo is his real name (it's not), the new film provides the chance to see a younger version of the character doing and saying things that are more or less similar to things you remember him doing and saying in the earlier films. If you're the kind of fan who nods appreciatively at any reference to making the Kessel Run in less than twelve parsecs, you may find Solo engaging, but that's not much to carry a 135-minute film.

Directed by Ron Howard (who replaced Lego enthusiasts Phil Lord and Christopher Miller after they had been filming for six months, reshooting about three-fourths of their work), Solo places the hero (Alden Ehrenreich) in a string of large-scale action sequences as he and a handful of space bandits led by Woody Harrelson try to steal quantities of a Macguffin-like fuel called Coaxium from a moving train, a distant mining planet and, ultimately, each other. There are hints of a romance, a last-minute eruption of idealism and enough shifts of loyalty and turns of character to create the illusion of plot twists, but for the most part the film sticks safely to the same formula as The Force Awakens: Create scenes that recall the earlier films, fill every inch of the screen with CGI creatures and keep moving so the audience is too distracted to notice the slightness of the whole structure.

Solo is hectic, visually unattractive and worst of all, just plain dull. Because the characters aren't meant to do anything but fill their familiar places, there's nothing at stake, no emotional nuance or shades of personality. The players realize that they're only expected to conform to their action-figure models, and at least one of them, Donald Glover, as the younger version of Billy Dee Williams' Lando Calrissian, makes it clear that he's not even interested in doing that. (It doesn't help that he's the center of two scenes involving a poker-like game that neither Howard nor the writers bother to explain to the audience.)

It's not a movie, it's just a cynical marketing tool, the cinematic equivalent of a Pavlovian bell meant solely to evoke a sentimental set of associations. It's lazy, even by the limited standards of franchise film making, a by-the-numbers adventure film with plot points as interchangeable and replaceable as Lego blocks (and Hollywood directors).