Crawling Crab Serves Some of the Best Seafood in Town 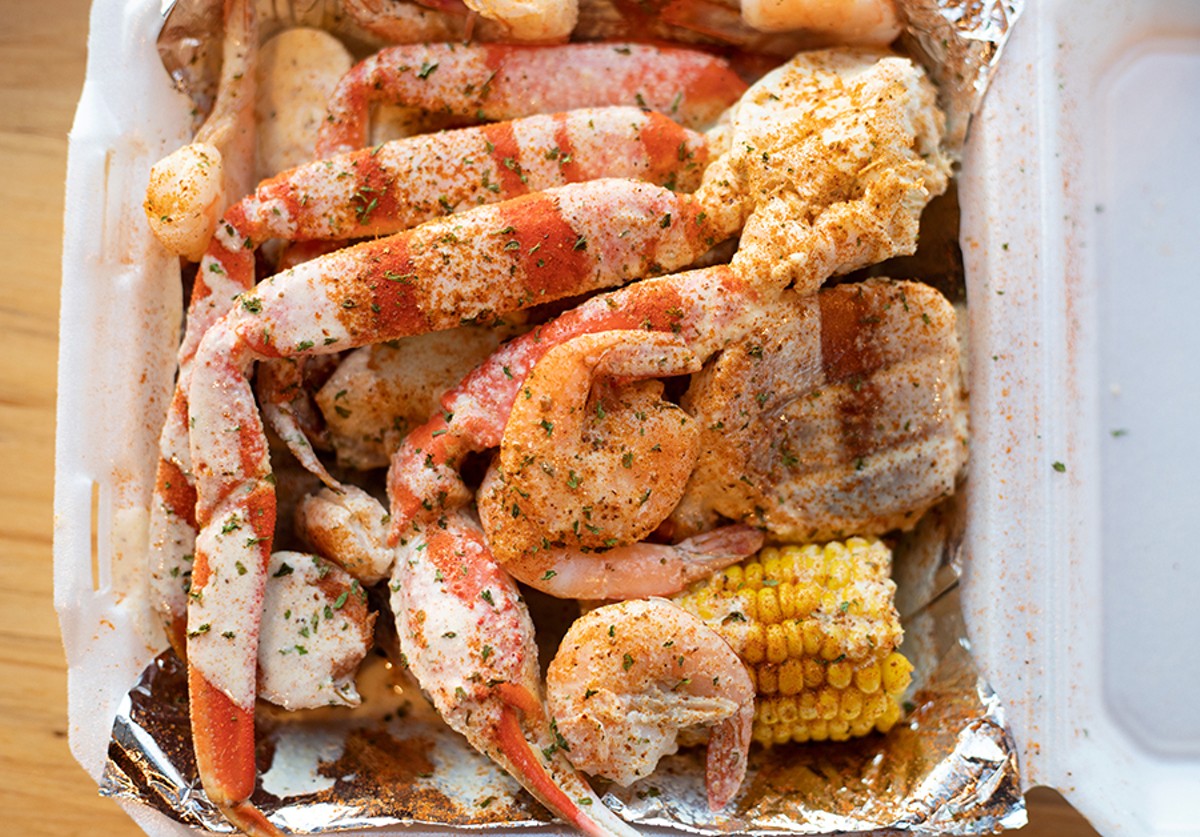 All of Crawling Crab’s shellfish — the lobster, crab and shrimp — are served as part of a platter that includes pieces of mild, Polish-style sausage, hard-boiled eggs, corn and potatoes.

Flavia Moore might still be working her soul-crushing, 80-hour-a-week job with Spectrum were it not for her daughter's love of Disney. The Moore family has been going to the Magic Kingdom ever since she was a baby, but the three-year-old was insistent that she wanted to change things up and go on a Disney cruise.

Moore wanted nothing more than to indulge her daughter, but she needed a way to make money for the pricey trip. Inspired by her longtime love of cooking, she figured she could earn some extra cash cooking for people out of her home. She did not want to do just any catering, however, so she thought long and hard not just about the type of food she could serve, but also about the sort of brand she could create that would garner significant buzz to get her the funds she needed to book that cruise.

Seafood seemed like an obvious choice. Not only is it a style of food Moore loves to cook, she also saw buttery, Cajun-inflected shellfish dishes as something that was missing from the St. Louis food scene — at least three years ago when she launched her business. She did some research, came up with recipes and enlisted her daughter (who, at just three, scooped out potatoes and cleaned crabs) as well as her fiancé and mother to help prep. She then posted a quick note on her personal Facebook wall saying that she was open for business, and her home-based catering company was born.

Moore felt that her idea was a good one. However, nothing could have prepared her for the immediate, overwhelming response she received. During her opening weekend, she completely sold out, making more money in two days than she did in two weeks at her day job. When Monday morning rolled around, she didn't hesitate: She quit her job with Spectrum and threw herself full time into the business that would become Crawling Crab.

In the three years since launching Crawling Crab, Moore has experienced a shocking level of success that could no longer be sustained out of her home kitchen. Originally, she and her fiancé, Robert Patterson, thought they would turn the concept into a food truck (hence the "Crawling" in Crawling Crab) and then explore options for a brick-and-mortar. However, they got the chance to open their storefront first when they were contacted by the community group behind Pagedale's 24:1 Coffeehouse Café. Moore got on the group's radar after catering a community film festival, and the members were so impressed that they offered to let her set up shop in their facility for dinner service.

Moore jumped at the offer and opened Crawling Crab in the 24:1 Coffeehouse Café space last August. With minimal signage and no restaurant infrastructure of its own, Crawling Crab feels like a pop-up inside of an existing concept. The large, open room has the vibe of an office building cafeteria; the walls are painted in a muted orange and sage green, and the cafe's breakfast and coffee menu prominently hangs above the order counter. Considering its minimal decoration and corporate aesthetic, at first glance, the space seems to lack character. However, as you peer at the artwork that decorates every table — each piece by Normandy schoolchildren — you feel the personality and warmth.

If you miss the tables, though, you're immediately warmed by the scent of garlicky, spiced butter that hits you the second you walk into the restaurant. Though Crawling Crab may not have much of an aesthetic footprint inside the cafe, the way its sweet shellfish aroma perfumes the air makes its presence known. The smell is so mouthwatering it's almost torturous if you arrive hungry. The lines can be so long that they stretch to the front door — even though you can see cooks in the kitchen working as hard and fast as they can — so it can take a long time to get your food, especially on Friday or Saturday nights.

One bite of Moore's flawlessly cooked, butter-drenched seafood, however, and you recognize that it's well worth the wait. Like the Cajun-inspired crab boils that have opened up around town in the years since it launched, Crawling Crab's main flavor profile is garlicky, mildly spiced butter. Its intensely rich and over-the-top decadence coats everything from the shellfish and potatoes to the nachos. Here, though, this is not simply a mask. Moore knows how to cook seafood, as evidenced by her shell-on shrimp, which are plump and tender. You can peel away the shell and dip the shellfish into the accompanying pool of seasoned butter, but the shrimp — having been subtly scented by the warm spices — are equally enjoyable without a dunk in the sauce.

Her crab clusters are similarly delightful. Served in a pool of Crawling Crab's signature butter, the sweet meat is like a wonderful sponge for soaking it all up. My only issue with this dish is how to eat it: Because the restaurant relies on plastic utensils, I found it virtually impossible to crack into the shells. If you're not taking this dish home, bring a metal fork with you or expect to work exceptionally hard to extract that excellent meat.

This is one reason I preferred the lobster tail. The other is because it is the most wonderfully cooked lobster I've had in recent memory. The meat is so succulent and tender I'd have thought it was prepared in the kitchen of a five-star restaurant. Granted the butter is a wonderful touch, but Moore's expertise is the real star.

All of Crawling Crab's shellfish — the lobster, crab and shrimp — are served as part of a platter that includes pieces of mild, Polish-style sausage, hard-boiled eggs, corn and potatoes. The effect is that of a seafood boil in a Styrofoam box, with Moore's rich, cream-fortified garlic butter serving as a velvety gravy that soaks into every component. Even the accompanying roll gets the garlic sauce treatment and is so saturated it's the consistency of bread pudding. Moore sold these decadent bread pillows — deemed Double-Dipped Garlic Butter Rolls, by the piece, but she eventually decided to offer them by the dozen because people could not get enough. It's easy to see why.

As rich as Crawling Crab's seafood platters are, its other offerings make them look like absolute health food. The Seafood Mac, for example, is laden with real crab meat, shrimp and six types of cheese and is so creamy it's like a savory custard. Moore's Magic Dust seasoning, the warm spice blend she puts on everything, breaks up the decadence a touch, but this is still as intense as eating an entire cheesecake. Three people could — perhaps even should — share a small order to avoid injury. Her seafood pasta is still really, really creamy, but less so than the mac 'n' cheese. Moore allows guests to order it Cajun style, a welcome spiciness to counter the richness.

The stuffed lobster tail is like the twice-baked-potato equivalent of shellfish, smothered in broccoli and an aptly named Gooey Sauce that is like a mix between alfredo and molten queso. It works, though with how well Moore cooks her lobster, I prefer to see it shine without the trimmings.

If Moore opens a second location of Crawling Crab, she should consider putting it in Illinois next to a dispensary. Her Monster Potato is so insanely large and overindulgent, you'd need to be utterly ripped to eat even half an order. Smothered in cheese and butter sauce, the gargantuan spud can be dressed with a variety of toppings including shellfish, bacon, sausage and, if you have a death wish, extra cheese. Her nachos are no less intense; I opted to have mine topped with tender, well-seasoned cheesesteak and hot peppers, one of the restaurants' few non-seafood offerings.

It's entirely possible that a second location could happen sooner rather than later. Based on the restaurant's runaway success, Moore is already thinking about how to expand the concept. She is actively pursuing a food truck, is gearing up to launch a line of her bottled sauces and Magic Dust seasoning, and has done a significant amount of research on whether or not she should consider establishing the Crawling Crab as a franchise. One of her devoted customers has been begging her to open a restaurant in her hometown. She lives in the Bahamas.

Already underway is a major transition at 24:1 Coffeehouse Café that will see Moore take on a much bigger role. In the next few months, she will take over the restaurant and convert it into a Crawling Crab; as part of that plan, she will handle the café's already established breakfast and lunch service, putting her unique spin on the menu.

Moore's success has been impressive by any metric except for one. With how busy she has been running Crawling Crab, growing her business and expanding into entrepreneurship, she hasn't been able to take that Disney cruise with her daughter that inspired the endeavor in the first place. For now, it's on the back burner, but she knows she'll get there one day. In the meantime, she's brought a magical seafood kingdom to us all.