Songs of the Struggle 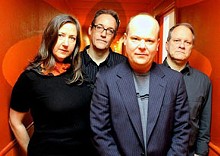 1968, that epochal year of worldwide tumult, had its complementary soundtrack. The pure idealism of the preceding year's Summer of Love seemed hopelessly naive in the teeth of the new reality, and perhaps it was the Rolling Stones' "Street Fighting Man" and the Beatles' "Revolution" (both recorded and released in '68) that best captured the year's discord, simply by virtue of their ambivalence. Both tracks expressed a subtle and measured skepticism about the prospect of the violent overthrow of Western institutions and the far-left radicals du jour who espoused it. But lots of people -- most folk-music artists -- other than Jagger-Richards and Lennon & McCartney weighed in musically and politically in this seismic, chaotic year. All the News That's Fit to Sing: The State of Protest Music in 1968 takes a close look at the entire year and its wealth of music-as-social-text. The multimedia presentation features live music from St. Louis band Rough Shop (pictured) and period-specific recorded music and commentary by Rough Shop member John Wendland. The event is free at 7 p.m. tonight at the Missouri History Museum (Lindell Boulevard and DeBaliviere Avenue; 314-746-4599 or www.mohistory.org).
Thu., Dec. 12, 2013

Jump to comments
« Weathering Above Ground   |   Take it Downton »