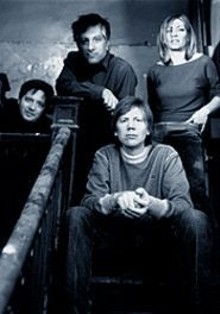 This is the Sonic Youth album that's going to disappoint the longtime fans. It's also the album that's going to please the longtime fans. It all depends on which Sonic Youth you like -- the whirling, staticky blur of the Confusion Is Sex/Sonic Death/Bad Moon Rising days (1983-85), the transcendent space-rock of EVOL and Sister (1986-87), the quasi-grunge of the Goo/Dirty era (1990-92) or the slightly damaged indie-art-pop of Experimental Jet Set, Trash & No Star (1994) and their last full-length, A Thousand Leaves (1998).

NYCG&F is more in line with A Thousand Leaves than Bad Moon Rising, which is not to say it is better or worse than either. Sonic Youth has been many sounds over the past 18 years, and as tempting as it is to compare each new album with their previous work, it's also unfair. The Sonic Youth that recorded "Kill Your Idols" is many years removed from the Sonic Youth of "Diamond Sea," and Sonic Youth 2000 is even further removed, both emotionally and musically. Their musical transformations and sense of movement are what keep Sonic Youth vital and, more important, enjoyable. Ghosts and Flowers is the album at hand, and it should be judged on its own merits.

So, having said all that, how is NYCG&F? Pretty good, but it's no Daydream Nation. (Man, that was a long way to go for a little payoff.) But that's the response a lot of people are sure to have, which is a shame. The record has some fine songs on it, but none of them is "Silver Rocket" -- which is the way it should be. It is time to appreciate "Nevermind (What Was It Anyway)" and "NYC Ghosts & Flowers," not hold your breath waiting for Sonic Youth to rewrite songs they wrote 12 years ago. Their new songs feature familiar Sonic Youth elements: shards of Beat-poetry lyrics in which the words are shorn of their meanings and exist only for the sounds they make; shifting drums that bob and weave between rock drive and blanket cymbal wash; loopy, multitextured song structures; and the ever-popular oddly tuned guitars that build strange chord forms, then tumble into milky waves of sound. These are the foundations of every Sonic Youth album, they're just manipulated different ways in different years. NYCG&F features these materials in a quieter, sadder light, as if it's late Sunday afternoon in the city and you can't feel the weight of the people all around you, just the void created by those who aren't there anymore. It's a nice balance to the raw blasts of their early years and the sprawling arty jazz-rock of their recent EP trio. Simply put, the new record is another step in Sonic Youth's noisy journey, but whether it's a step forward, backward or sideways is a decision that rests with the individual listener. The longtime fans wouldn't have it any other way.