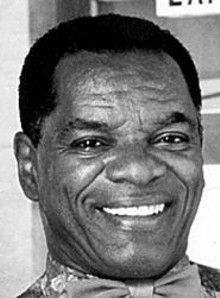 The well-traveled comedian is also familiar for his roles as Pops on The Wayans Bros. TV show and as Mr. Jones from the Friday movies.

What you may not know about Witherspoon is that he usually makes up his own lines. His stuff is so funny that most directors allow him to ad-lib most of the way through their films.

As a standup comedian, he begins his routines by doing some of his famous lines from movies such as Boomerang, in which he stole the show with his "Bang! Bang! Bang! Bang!" joke. "They demand that," he says of his comedy-club audiences. "If I don't start doing them [his noted film ad-libs] they'll do them, so I've got to get them out of the way right away."

Spoon, as he is known to his friends, has even named his Web site www.bangbangbangbang.com. At the site and in the lobby after his shows, fans can purchase T-shirts, mugs and bumper stickers that feature every memorable line from the funnyman's career. When accused of being a shameless hustler, he replies, "Hey, I'm a comic and I'm a street vendor."

In addition to his gift for ad-libbing and his rubbery face, the comedian is known for his retro-chic wardrobe, which features blinding plaids and an array of nerdy bow ties. Witherpsoon says he'll be dressed up as usual for his visit to St. Louis.

"They want me to wear my white shoes and polyester, and I give the audience what they want," he says. "My wardrobe is the cheapest thing about my act. My shirt costs $5; my pants are $5. I go to secondhand stores. That's where I 'coordinate,'" he explains, referring to another of his famous improvisational movie lines. "For $5, I'm coordinated."