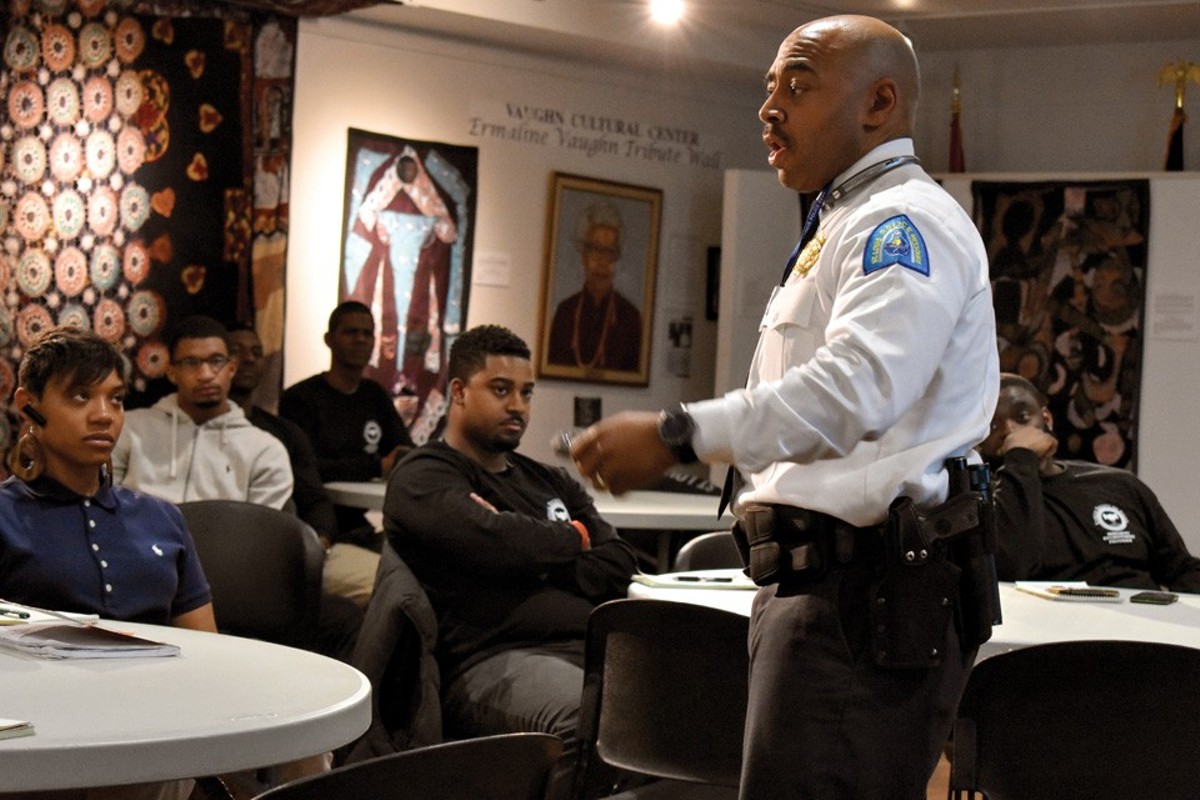 DOYLE MURPHY
Seventeen of Ethical's recruits graduate from its 2018 program.

On the evening of May 15, Heather Taylor adjusts strands of black and gold balloons inside the Herbert Hoover Boys & Girls Club in the Jeff Vander Lou neighborhood.

Seventeen of Ethical's recruits will graduate from the program tonight. It's a good percentage of the two dozen or so who began the course, but not all seventeen will become police officers. Taylor and the other instructors estimate they have ten or twelve solid candidates for the city police academy. The others have items on their records or other issues that will keep them out. (For anyone who does not make the academy, Ethical promises to help steer them toward other law-enforcement jobs, possibly in civilian roles.)

Liddell arrives with his wife, Brittany, and 22-month-old son, Liam. As class president, he will deliver a speech. He has shaved off his goatee, and his hair is trimmed close.

The instructors count him among the dozen or so viable candidates for the academy, but there is a problem. During the routine psychological exam, an evaluator flagged him for more testing. Liddell took a follow-up written exam — 350 multiple-choice questions — and was told he did not pass. He cannot understand why. Four years ago, he passed the evaluation without issue.

The instructors are also perplexed, but they are not quite as surprised. Taylor describes the current psych evaluation as "archaic" and says it is under review by the city after Ethical raised concerns about it. She says the process has repeatedly knocked out qualified candidates, especially black candidates. Liddell is a good example, she says. He has attended every class, interacted with all the instructors and proven himself a reliable leader.

"We've been with him for ten weeks versus you coming into someone's house and talking with them for two hours," Taylor says.

Hayden has said he is willing to look at recruits on a case-by-case basis, but he is not making any promises. "I've been certainly open to reconsideration for minor concerns, but I have been careful to make sure they're not major concerns," the chief says. "We have to uphold standards."

Edwards has also agreed to consider good candidates tripped up by small mistakes. He says he is a fan of Ethical's program. He was an invited speaker for one of the classes, and spent more than an hour with the recruits. But he hesitates when asked if the city would restore some of the program's funding in the future. "I might be wrong, but I don't believe I've received a formal request for support."

Instead, he has been focusing on a different program that he thinks could build a large new talent pool. At his direction, the city will roll out a cadet program in July. The plan is to enroll 300 people, ages eighteen through twenty. They will spend four hours a day training with police, and unlike Ethical's recruits, they will be paid — $13 an hour for eighteen-year-olds and $15 an hour for older cadets.

"We have to sell the job," he says. "We have to convince kids this is a perfect fit."

Edwards wants to create a pipeline from high school to the police academy. And while applicants of any race or ethnicity can join, the goal is to recruit more minorities. "My hope is to recruit people who are from St. Louis, who love St. Louis and who really, really want to be a police officer," he says.

Taylor says Edwards' cadet program could be a good thing if handled correctly. But she is still hopeful the city will provide real backing for the association's recruiting program. She believes its efforts are already paying off. Including tonight's graduates, Ethical expects to have placed 50 or more of its trainees in law-enforcement jobs since 2015. Class of 2018 recruit Tajon Bastain, 21, has already been hired by the St. Louis Sheriff's Office. Officers from its two earlier classes are now coming back to the program to help teach newcomers.

But it is not easy. The small issues that hold back candidates — speeding tickets, unpaid taxes, poor public school education — vary from person to person. It is only through personal attention that Ethical helps them succeed. Even on graduation night, the instructors pull aside recruits to check in on their various applications. Sgt. Jason Love, speaking to the class, implores all the candidates to keep calling him and letting him know how things progress.

"We're going to fight for you until there is no more fighting to be done," he says.

Liddell takes the microphone for his speech and reminds his classmates about all the work they have put in and all the work ahead of them.

"Be sure to continue to promote change," he says, "not only with your words, but with your actions."

A week after the ceremony, the new graduates are working toward the academy. Interviews are underway with police department recruiters. Psychological and physical-fitness tests are being taken.

Hollwell, the ex-serviceman, finishes an overnight shift at RB Manufacturing at 6:15 a.m. and arrives at 9 a.m. at the police academy for his physical-fitness test. Inside, he spots two other graduates from the Ethical program.

He has been training three days per week, running sprints interspersed with sets of pushups and jumping jacks. When it's his turn, he kills the obstacle course in two minutes and 30 seconds, a full minute faster than the cutoff time. The others from the program pass, too.

Hollwell will grab some food and try to sleep a little before his next shift at the factory, but he is dreaming of a new life in the department. He has already written up his two weeks' notice. "I'm just waiting to fill in the date."

Ethical's next recruiting program begins in August, but the instructors are still wrapping things up with the newly graduated class. Taylor plans to spend the weekend typing up letters of recommendation. But she will have one fewer letter to write. Liddell is withdrawing.

The class president had previously submitted an application to the St. Louis County Police Department, and he has gotten good news. A county recruiter who attended the opening night of Ethical's program dug up that old application and kept an eye on him as the course continued. In late May, a week after the graduation ceremony, Liddell learned he has been accepted into the county's police academy. Apparently he passed its psych evaluation just fine.

He will be a new cadet by the end of June. It was not the plan he set out for himself in February, much less four years ago, but he is here now. He could be a police officer by December. "I'm just ready to get out on the street," he says.