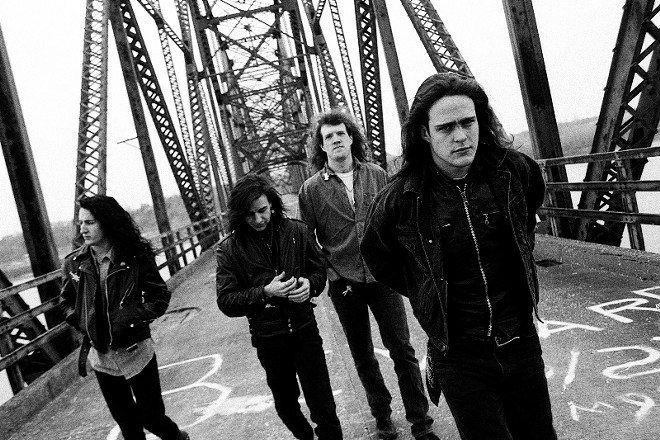 UPDATE: This concert has been rescheduled for Friday, February 4, 2022.

If you walked down the cobblestone streets of Laclede’s Landing in the late ‘80s or early ‘90s, you were almost certain to hear the eclectic sounds of Pale Divine booming from classic, bygone venues such as Kennedy’s 2nd Street or Mississippi Nights. Originally formed as four-piece the Eyes in 1984 by singer Michael Schaerer and guitarist Richard Fortus, with the tight rhythm section of drummer Greg Miller and bassist Steve Hanock, the band came together when its members were still in school. With a jangle somewhere between the ‘80s pop romanticism of Psychedelic Furs and the glam and grit of L.A. hard rock megastars Guns N’ Roses (fittingly, Fortus has since been a member of both groups), Pale Divine was poised for a brief but spectacular moment to be the next river city rockers exported to the national stage.

For a variety of reasons, that wouldn’t come to pass. But this week, the beloved band reunites for a hometown New Year’s Eve show at the Pageant, joined by Fortus’ thirteen-year-old daughter Clover’s band Poster Logic, as well as the original lineup of the Finns. This year marks the 30th anniversary of the release of Pale Divine’s only record on Atlantic Records, 1991’s Straight to Goodbye, lending an even more festive air to the night’s proceedings.

In anticipation of the show, RFT spoke to Fortus, who fondly remembers the band’s origins.

“I was about fifteen when we started the band,” he says. “Michael Schaerer and I went to high school together, [at] the Visual and Performing Arts High School.

“We were originally the house band at a place called Animal House, which was an underage club up on 367 and Chambers,” Fortus recalls. “It was an old movie theater that had a huge theater space. They’d have two bands a night. It was usually us, who were the new wave punk band, and usually a Top 40 band.”

But the alternative group took a workhorse approach to local gigging, never turning down a show, and quickly became the top-billed club act on the Landing.

“We would play everything — renting out VFW Halls, playing in Columbia for frat parties, or we would open for bands at Mississippi Nights,” Fortus says. “We built up our audience; [it was] very grassroots. We’d put flyers up all over U. City. Later, when we were old enough to play the Landing, we would put up flyers everywhere on the Landing or go to other bands’ gigs and hand out flyers.”

Fortus knew the band was beginning to make a big impression when they started headlining shows with bands they had previously opened for. By the time the band became known as the premiere live act on the Landing, they had mastered the art of the live show.

“We were very much a live band. Our live shows were our big calling card,” Fortus says. “I think that is probably how we were most influential on the St. Louis music scene — our production. It looked like an arena show, in a club. The songs were sort of fitting for that.”

They soon settled in as the house act at Kennedy’s, which Fortus describes as the band’s “home base.”

“We sort of honed our skills there,” he says. “We would really push the production level at Kennedy’s. I think we were very effective at not only changing what bands looked and sounded like on the Landing, but also how they got paid. Nobody was charging a cover when we first got started at Kennedy’s. They were paid a flat fee. We told them you don’t have to pay us anything, just let us charge a cover. They didn’t think anyone was going to pay a cover, but they let us do it and it changed things for all the bands.”

The band’s ability to draw enthusiastic sold-out crowds and its catchy, original tunes eventually caught the attention of major labels, and the group landed a contract with Atlantic Records in 1990. But that didn’t happen without a bit of a bidding war first.

“We had, over the course of a year or so, had every major label come out to see us,” Fortus says. “We created a big buzz in the midwest. The word got out to the coasts about us. People from L.A. and New York would fly in to see us and take us out to dinner. It was an interesting learning experience.”

The group then added new bassist Dan Angenend, changed its name from the visual organ moniker to the poetic Pale Divine, and released its debut album Straight to Goodbye in 1991 with high hopes of ascending to the next level of rock stardom. The plan was to break into the national market, and the group’s members hoped that the major label deal would help them do so.

“In retrospect, I think that was a mistake,” Fortus admits. “Had we continued what we were doing and continued building our grassroots fan base, I think the band probably would have ended differently.”

Pale Divine released the single “My Addiction,” a song peppered with longing for larger-than-life stardom, but saw little fanfare outside of St. Louis. In ’92, the band booked a crucial opening slot with the Psychedelic Furs, offering a shot at touring the states to gain some much-needed traction for the album. The tour was a success, ultimately leading to a crucial collaboration between Fortus and Furs frontman Richard Butler with the group Love Spit Love (you can thank them for the theme song for Charmed), but it wasn’t enough for Atlantic to continue with the group. The record label took Pale Divine’s album title a little too literally, and just as the group had gotten signed, its members were already saying goodbye to their lucrative contract.

“Having a major label album and not recouping…basically it was them throwing shit against the wall and going with what stuck, and we didn’t stick,” Fortus jokes about the split with Atlantic records. “The album didn’t capture the energy that we had live.”

A follow-up album with Atco records was in the works, but in-fighting resulted in the scrapping of the sophomore effort and a departure from Atco as well. Unfortunately, the stars never fully aligned again for Pale Divine during its original run, and its major label chances for mega-stardom burned out with an unceremonious break-up in 1994.

With time healing old wounds, the members of Pale Divine had their first reunion show in 2008. Multiple successful reunion gigs would take place over the years since, scattered throughout the last decade when Fortus wasn’t busy touring with post-Chinese Democracy-era GnR. The hometown heroes last reunited in 2018.

Preparing for its first show together in the new, post-COVID concert landscape has been challenging but exciting. Fortus is most stoked to be passing the torch to his thirteen-year-old daughter, Clover, whose band, Poster Logic, will open the show, as well as the Finns, who played countless shows with Pale Divine in its heyday. Pale Divine has a lot of surprises in store, too, with a setlist full of early Eyes material, Straight to Goodbye-era highlights, and a few covers sprinkled throughout for good measure.

“It’s fun to play material I’m proud of, and to play it with old friends,” Fortus says. “It was such an important part of my life. It is really a great feeling to get to do that again every four or five years. It’s touching to see how important those songs were to so many people. It feels great to look out to people singing every word still, 30 years later.”

It’s especially comforting in 2021 to revisit beloved local music from a simpler time while we ring in the new year, with all of the optimism that entails. Here’s hoping this New Year’s Eve show is the start of a new St. Louis holiday tradition.