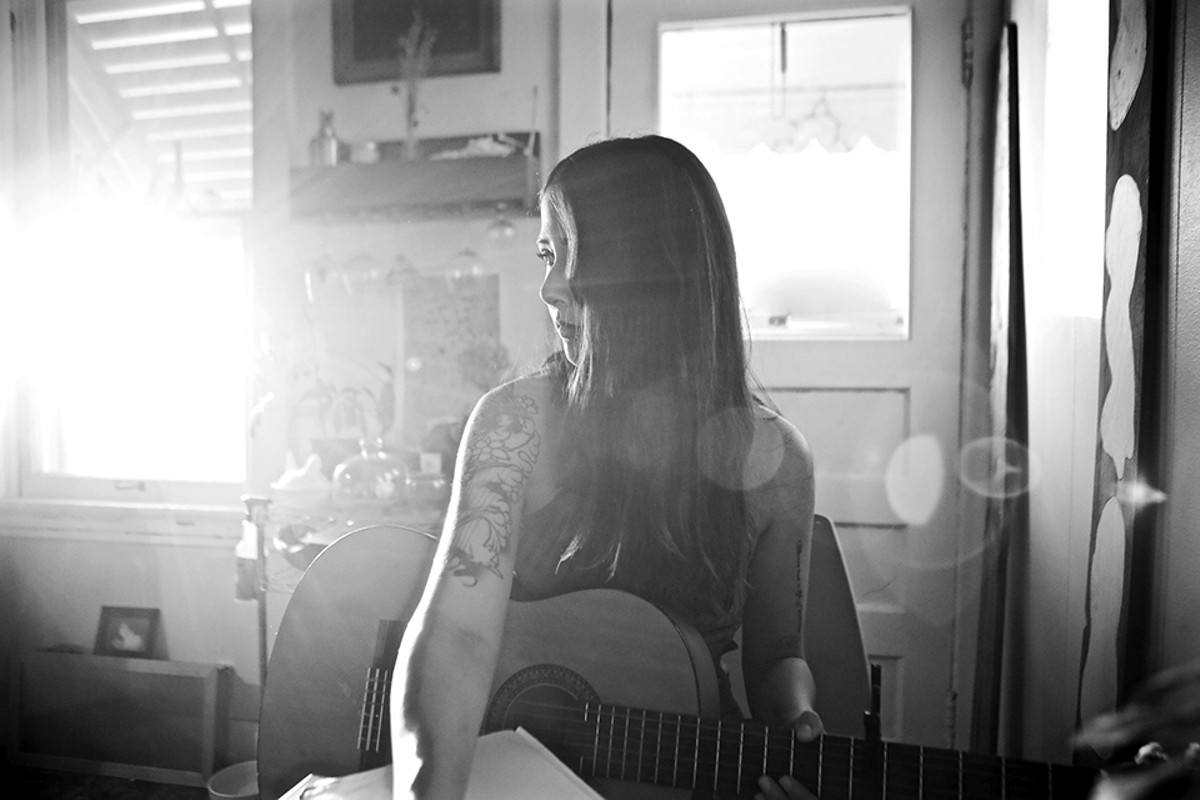 Lisa Houdei, a.k.a. Le’Ponds, is one local act who has been featured in Nate Burrell’s photography.

Nate Burrell's camera sees what the heart and body feel. His subject is principally music — live shots and portraits — but to say he's a "music photographer" isn't quite right. His photos don't just capture moments of musical performance. They express the human feelings of those moments and their wider cultural resonance. In that way, they are deeply musical.

Burrell has been working as a photographer in St. Louis since 2009. He's a native Ohioan, born and raised in the farming community of Rootstown just outside of Akron. Over the last decade, he's contributed to St. Louis' musical evolution, documenting its live performances, from the smallest shows to the biggest festivals, and shaping the visual story of emerging artists like Pokey LaFarge, Beth Bombara, Middle Class Fashion, the Big Muddy label roster and the FarFetched collective. He's also worked around the country and has won the trust of major-label artists like Jason Isbell, Amanda Shires and Langhorne Slim. And he's produced definitive concert images of Willie Nelson, Brittany Howard of Alabama Shakes, and, importantly, OutKast on stage at LouFest 2014, one month after the shooting of Michael Brown. The story of American music in the 21st century wouldn't be the same without his eye.

Burrell's introduction to the St. Louis music scene came by way of fellow image-maker and videographer Bill Streeter, who introduced him to LaFarge, who in turn opened the door to a burgeoning Americana and roots revival. He has continued to work with LaFarge as tour and publicity photographer, videographer and producer of album art, including the artist's last release, Manic Revelations.

"He's the most loyal man to me in the city of St. Louis — from the beginning," says LaFarge via text message. "So it's only fitting that he be the one to capture me on many various stages literally and figuratively through my career — from the beginning. Mostly shot in black and white, which a lot of times my life has been."

Burrell also credits early opportunities to shoot for KDHX radio, documenting the station's live in-studio sessions with national and local artists, and covering Twangfest events, before and after the station's partnership with the festival, in both Austin at South By Southwest and locally.

"That's how it started here for me," Burrell says from his backyard in the Cherokee District. "I learned all the things that are not inside the camera: how to be around artists, how to treat them as people and not be starstruck. At the same time, I try to treat our bands just like any national band."

Burrell works mostly in the digital medium, but his signature style is black and white, with an emotional minimalism that draws on negative space and the contextual settings of music. He is self-taught, and it shows in his work, which is far from technically perfect but which breathes with all the imperfections of life. He's a craftsman who makes time every week just to shoot, regardless of assignment.

"Early on, I asked questions of other photographers, read about it, but it's the practice," he says. "Basketball players practice foul shots, writers read to find new language. I try to know every tool in the camera, but there's no point in buying the latest and greatest thing. I love to see analog everything coming back, but even if you're a film photographer, a mediocre photo is still a mediocre photo, even if it has a light leak on it."

A year after moving to St. Louis, Burrell was in a serious accident when he was in Kansas City for an Ani DiFranco concert. He was on crutches for over six months. The injury and recovery changed his work.

"Photography was my entire social circle, so I kept shooting," he explains. "To do it on crutches forced me to go back to an analog style. I had to position myself away from all the other photographers and think about every frame. I had to post up and anticipate every shot. It was miserable, but it really slowed me down as a photographer.

"I still shoot like that. I take minimal shots and try to make them count."

In conversation, Burrell has that same thoughtful, patient focus. He's an intense but never pretentious artist. When asked about his photography, the musicians he's worked with over the years all recognize what separates his approach.

"It is very interesting to watch Nate photograph a show," says New Orleans musician Esther Rose. "He's in the front row, totally absorbed in the music, but he's still one step ahead, eyes wide, not a frame wasted."

Fellow Ohioan Patrick Sweany, a blues musician now based in Nashville, Tennessee, who has a dozen albums in his catalog, invited Burrell to document his recent recording sessions in the legendary Sam Phillips studios in Memphis. Sweany echoes Rose's sentiment: "What I admire about Nate is his absolute patience with and complete trust in the moment revealing itself in its own time. His perception of when the moment may happen is uncanny."

"Nate sees an angle or view in his own unique way that most of us typically would miss," says local country musician Jack Grelle. "Then he is able to capture it in a timeless manner that may be standing still, but is often full of movement."

Kellie Everett, of the Sidney Street Shakers and the Southwest Watson Sweethearts (among other St. Louis-based groups), admires Burrell's eye. "He has the special ability to see things that I don't even notice are there," she says. "He catches the perfect light and shadows, the nuance, the expression. You can look at one of his photographs and feel the energy that was present at the time."

On Friday, October 18, Burrell will present ten years of that energy in a retrospective called "Sound Stands Still," at Brennan's Work & Leisure in Midtown. Along with a showing of over 100 images (all framed and for sale to the public), the event will feature DJ sets by 18andCounting and a live performance by blues pianist Alexandra Sinclair.

"It's been a series of second guesses," Burrell laughs as he discusses making choices for the show. "Of the 120 photos there are 101 artists. I wanted to show different styles of music, different instruments, different colors and genders. I wanted the show to be inclusive and to show the breadth of how I work. I really wanted to show musicians here in town right alongside people who are or will be in the Rock & Roll Hall of Fame."

Whether framing intimate portraits of the historic Lavender Country reunion, crafting experimental images for rock or synth-pop artists, or distilling the essence of an icon like B.B. King, Burrell believes photography isn't just a way of documenting culture; it's a way of understanding and creating it.

"I like performance, knowing that something can go off the rails," he says. "I studied anthropology in college, and I love subcultures. We might click and scroll through photographs, but they are part of the cultural perspective of a time period. It's not just the musician. It's the way the stages are set up and the clothing styles — all of that changes with time. I think about what these images will mean down the road. You are documenting future history."