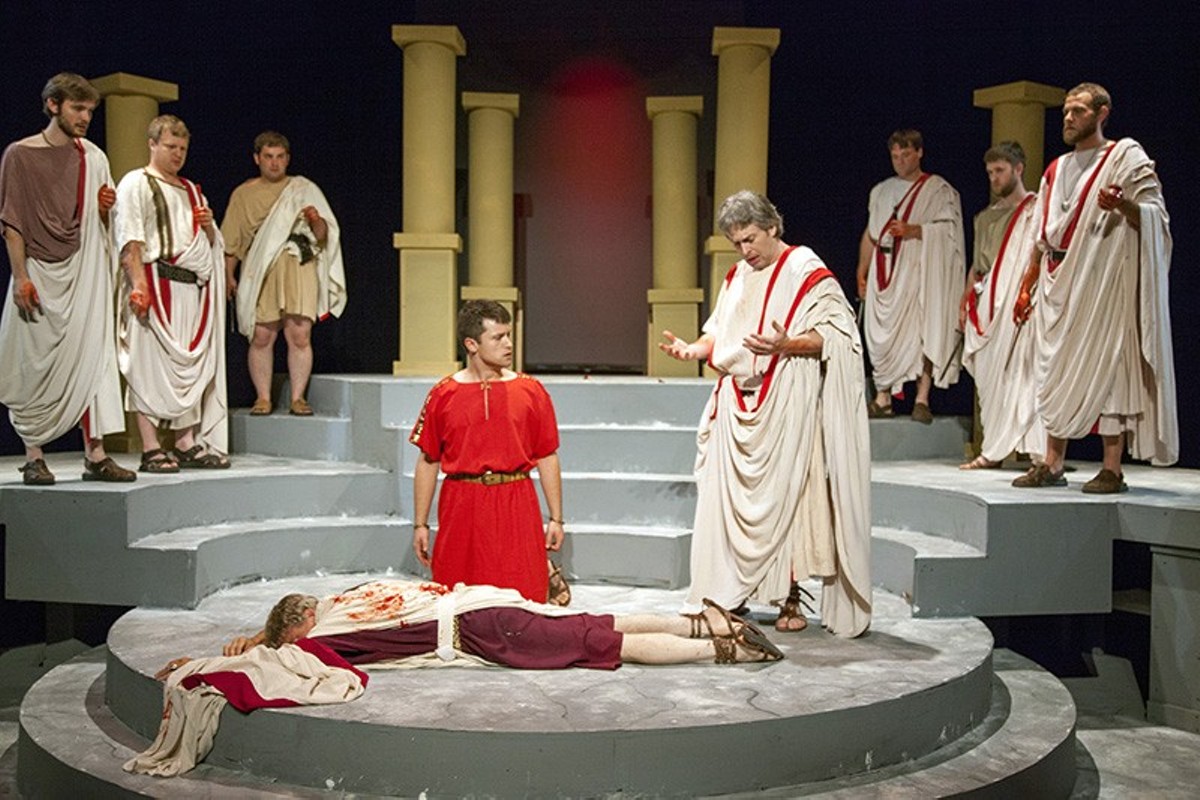 The murder of a great man: good idea, or bad? JOHN LAMB

Presented by St. Louis Shakespeare through August 14 at the Ivory Theatre (7260 Michigan Avenue; www.stlshakespeare.org). Tickets are $15 to $20.

Some people aren't excited by William Shakespeare. I get that, even if I don't understand it. Before a recent performance of St. Louis Shakespeare's current staging of Julius Caesar, the husband/boyfriend sitting a few rows down from me groused about being in attendance. "We're going to watch a 500-year-old play. About something that happened 2,000 years ago." The "why?" was not voiced, but it was heavily implied.

I hope he got an inkling of why we were all there when Julius Caesar (a truly great Tim Callahan) took the stage in an atypical (for ancient Rome) blonde wig, combed in several contradictory directions. This drama about a man poised to set himself above a long-standing democracy reveals quite a bit about our own tumultuous times. (Coughcough2016electioncough.)

John Wolbers has trimmed down Shakespeare's script to focus our attention sharply on the political and personal machinations of the main players, and Tom Kopp directs the large cast with a keen eye for every conspiracy and conspirator. The second half of the play suffers from a staging problem, but it's not enough to dull the luster of the performances.

Longtime St. Louis Shakespeare company man Ben Ritchie plays Brutus, friend of Caesar and reluctant assassin. Maxwell Knocke, who has a great gift for playing men whose passions get the better of them, is his fellow schemer Cassius. These two noble Romans together negotiate the killing of Caesar, whom they suspect will claim the title of emperor and thus destroy the Republic.

It's important to note that Caesar is offered a crown three times (off stage), and each time he refuses. He has done nothing wrong yet, and the conspirators' evidence for his imperial aspirations is mostly personal feelings and hunches. In a lengthy argument between Cassius (very much for the murder) and Brutus (ambivalent at best), Brutus hits on the realization that if any man is allowed to set himself up as a god, only god will have freedom. For voting members of the Roman Republic, freedom is their inheritance. To take it — even to threaten to take it — is equivalent to treason. Killing Caesar robs him of his freedom, but better one man suffer than an entire nation fall under the yoke of a tyrant. Right? (Shakespeare can make you argue for some very questionable concepts, no?)

Ritchie plays Brutus as a sangfroid philosopher, one who views Caesar's tyrannical leanings as an affront to good government. "The abuse of greatness is when it disjoins remorse from power," he remarks about the nature of leadership. (Pretty astute for 500 years old.) Killing Caesar must be done out in the open and then fully explained to the people of Rome, so they understand none of the killers desire to take a crown themselves.

Knocke's Cassius takes a more personal approach to murder. He's infuriated by Caesar thinking he's better than the rest of them, and suggests that Caesar's heir Mark Antony (Brennan Eller) be slain as well. The fervor in his eyes and his rictus grin imply Cassius' driving interest is blood lust more than political equilibrium.

Set designer Chuck Winning has conceived a grand staircase that dominates center stage, with smaller sets of stairs off either side, curving toward the center. They are excellent for presenting the gang murder. Caesar stands atop the middle set of stairs dispensing justice, and the wolf pack of killers close the circle and start stabbing. Callahan hits the deck with a knee-aching thud, blood staining him from calf to face. It's gory and powerful, the horror of it compounded by the murderers crouching around the corpse to wash their arms up to the elbow in his blood.

Unfortunately, those same stairs take up so much real estate that they make difficult the staging of the second act's battle for Rome. Act Two is a series of skirmishes between Mark Antony and his ally Octavius against the eight bloody men. Many of these running battles are forced behind the stairs, as there simply isn't enough room to bring everybody on stage. The result is a very static second half, sapping the momentum generated in Act One and nearly undercutting some excellent performances.

Eller is very good as Mark Antony, a professional soldier who seizes his chance to conquer everybody and claim that crown for himself. Ritchie maintains Brutus' noble mien; he's simultaneously able to plan for war and talk Cassius down from going full psycho on his allies.

In fact, Brutus views murder and war from such a lofty intellectual vantage point that his motivations seem almost inhuman. Or is he merely the ultimate politician, weighing all sacrifices against the goal of smooth, efficient governance? Far easier to understand is Cassius, with his consuming passions and destructive grudges.

Still, I wouldn't vote for him.