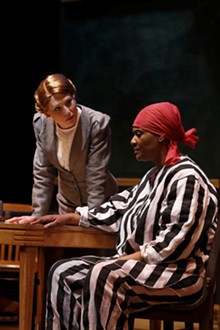 Newly Reviewed
Agnes of God Reviewed in this issue.

Curtains The leading lady of a Broadway-bound musical is killed onstage while the show is trying out in Boston, and the detective assigned to the case turns out to be hopelessly stage-struck. The premise of a neophyte theater buff simultaneously solving both a murder and a musical's out-of-town problems certainly has promise. Alas, librettist Peter Stone died before the script was done (he was replaced by Rupert Holmes), as did lyricist Fred Ebb — thus leaving composer John Kander to partner on alone. But there are other problems here, and they're local. On Broadway Curtains' running time was two and a half hours. Here it's fifteen minutes longer. This production doesn't need a director; it needs a muleskinner with a bullwhip, someone who's not afraid to lash it into shape. Performed by the Kirkwood Theatre Guild through May 7 at the Robert G. Reim Theatre, 111 South Geyer Road, Kirkwood. Tickets are $22. Call 314-821-9956, ext. 1. — Dennis Brown

Ongoing
Awake and Sing! The excitement begins even before the lights rise on the opening scene. In the darkness we hear the sounds of a family at supper. Energy surges across the stage and into the auditorium. By the time the lights come up, the audience knows it is in the presence of something remarkable. Clifford Odets' 1935 saga of restive lives trying to ride out the Great Depression is an American theater touchstone. For the most part, this cast (directed by Steve Woolf) rides this impassioned script like surfers on a great wave, allowing Odets' cadences to carry them through the night. And a memorable night it is, for it reminds us that we go to the theater to have our emotions shaken. At age 76, Awake and Sing! still delivers an electrifying jolt. Produced by New Jewish Theatre through May 8 at the Wool Studio Theatre at the Jewish Community Center, 2 Millstone Campus, Creve Coeur. Tickets are $34 to $36 ($2 discount for seniors and JCC members). Call 314-442-3283 or visit www.newjewishtheatre.org. (DB)

Black Pearl Sings! Out of the legend of Huddie Ledbetter, better known to the world as Lead Belly, comes this two-character play with a cappella music — and lots of it. Here Lead Belly has switched genders. Alberta "Pearl" Johnson (Denise Thimes) is a prisoner in a southern prison who is discovered by Susanna Mulally (Shanara Gabrielle). The play is a seesaw battle for control between these two in a world where nothing is quite as it seems — except this: Denise Thimes is a force to be reckoned with. The rapport between Thimes and her audience is palpable. Performed by the Black Rep through May 15 at the Grandel Theatre, 3610 Grandel Square. Tickets are $17 to $47. Call 314-534-3810 or visit www.theblackrep.org. (DB)

Jump to comments
« Null and Droid: Playwright Sarah Ruhl kills with Dead Man's Cell Phone   |   Stray Dog takes Dark Matters to the edge of credibility — and keeps us there »