St. Louis Standards: After 73 Years, Kreis' Steakhouse Is Still in its Prime

PHUONG BUI
Prime rib has been a signature of Kreis' restaurant since the 1960s.


St. Louis Standards is a weekly column dedicated to the people, places and dishes that make our food scene what it is.

Renee Tompras Bogdanos vividly remembers the first thought that went through her mind when her dad called to tell her he bought Kreis' Steakhouse & Bar.

"I said, 'What do you mean you bought Kreis'? What's Kreis?'" Tompras Bogdanos recalls. "It was a well-known restaurant, but to be honest, I'd never been there before he bought it. I hadn't even heard of it."

Now, as owner of the beloved Frontenac steakhouse, Tompras Bogdanos knows more about the place than she ever bargained for. Since 1983, she and her family have been at the helm of the Kreis' ship, serving as both stewards of the iconic brand and innovators looking to push the restaurant forward without fundamentally altering it. She's successfully struck that balance for the past 38 years, shepherding the restaurant through changes in customer preferences, a fire that nearly destroyed the building, financial downturns and now a pandemic, all the while dutifully embracing the role of restaurateur that was thrust upon her when her dad purchased the place on a whim.

When she looks back on his decision, Tompras Bogdanos realizes she shouldn't have been surprised. Well before he purchased Kreis', her father was a restaurant heavyweight thanks to his role as the owner and operator of the famed St. Louis eatery Garavelli's. It was a job that kept him quite busy — so busy that he never had time to go out to eat himself. However, as Tompras Bogdanos explains, fate would put him at Kreis' one evening back in the early 1980s, at a table within earshot of some important business going down.

PHUONG BUI
Kreis' started out as a tavern for travelers along Highway 67.

"My dad was eating dinner there one night, which he never did, because he was always working 24/7," Tompras Bogdanos recalls. "Someone came in to look at some water problem, because the Kreis family was looking to sell. My dad asked around, and it turned out, the people who were trying to make the deal were hemming and hawing about it, so my dad got on a plane the next day to Florida to meet the Kreis family and sealed the deal right there."

For the Kreis family, the decision to let go of their restaurant to a seasoned restaurateur was an easy one. When they founded the place in 1948, it was little more than a roadside tavern for people traveling up and down Highway 67, better known for shuffleboard and cold Falstaff than the food. In the 1960s, they turned over operations to a man named Jack Kane, who had formerly managed Sunset Hills Country Club; though the Kreis family retained ownership of the restaurant, they allowed Kane to take over the place for nothing more than the monthly rent.

Kane's impact was significant. Not only did he transform the space from a low-key spot into a bona fide restaurant, he introduced its legendary prime rib, a dish that, from its inception, became synonymous with the place. He was so successful that he briefly changed the name to Jack Kane's, but decided that was one change too many. Under his watch the restaurant grew, but when he passed away, his wife was simply unable to keep up with it. The Kreis family knew that they were not interested in returning to the business, so they eagerly sold to Tompras Bogdanos' father, confident that their legacy would be in good hands.

They were correct. With the Tompras family steering the ship, the restaurant thrived, even after a fire ripped through the building just a year after they bought it. Rather than letting the incident discourage him, Tompras Bogdanos' father saw it as an opportunity to build the restaurant back bigger and better than ever, expanding the dining room past the bar and moving the kitchen upstairs from the basement. 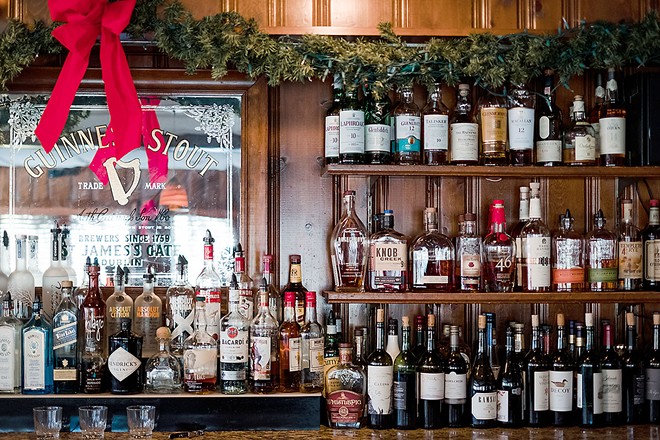 PHUONG BUI
The bar at Kreis' has been a local gathering place for over 70 years.

"It never stopped, and just grew and grew from there," Tompras Bogdanos says. "People loved it, and they didn't mind waiting for their prime rib, because they would run into people they knew. It was a well-known restaurant like that."

In 1989, Tompras Bogdanos' father passed away, leaving Kreis' in the hands of her uncle, who had been there with him every step of the way since he purchased the place six years prior. He ran the restaurant for two years, then passed the torch to Tompras Bogdanos and her brother, George Tompras, who proved to be worthy successors of the restaurant's rich tradition, introducing specials, smaller cuts of prime rib and seafood dishes that have become some of Kreis' most popular offerings.

Tompras Bogdanos does not mince words when she talks about the ups and downs of the business. Though she and her brother have enjoyed success with Kreis', they have also had their share of setbacks.

"We did a booming business, but when the casinos came, they took a big chunk of it. Also, St. Louis has lost a lot of major companies, and when they left, their expense accounts left. We used to have businessmen here all week long when this was a TWA hub, but when that left and the casinos came, it really put a damper on business. Also, in the 1990s, people stopped wanting to eat out late; then 2008 came and it hurt us because of the crash. 9/11 happened and then COVID came and tried to destroy everybody. It's been a lot of change." 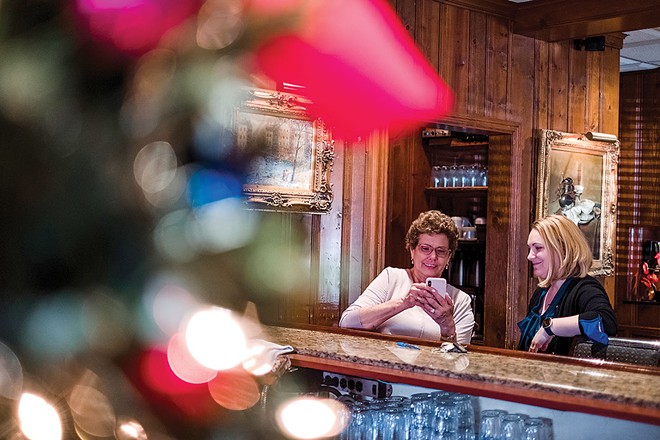 Still, Tompras Bogdanos and her brother found a way to weather the storms side by side, until his passing about five months ago. She admits there was a moment around that time when she wondered about the future of the place. Not wanting to wish such a difficult restaurant lifestyle onto her son who worked outside of the industry, she gave him the option of getting into or staying out of the business. To her delight, he chose to go all-in and has been thriving at the restaurant, ensuring Kreis' future for another generation.

Tompras Bogdanos knows that is reassuring to her longtime guests, who have come to see the restaurant's prime rib as one of life's few constants. She understands why they love it so; the restaurant buys the best quality of meat she can source and cooks it in Alto-Shaams, which allows the meat to cook slow and low overnight, breaking down the membranes so that it becomes impossibly tender and juicy.

However, she also knows there is more to their feelings about the restaurant than the delicious food. Having been in the business now for nearly four decades, she's had a front-row seat to some of the most memorable moments in her guests' lives, and has watched as diners bring in the next generation, and the next, to enjoy something that is so near and dear to their hearts. And no matter what changes and challenges the business throws at her, that's enough to keep Tompras Bogdanos going.

"Sometimes, I think young people are going to walk in here and wonder what is so great about it, because they can go to all of these multimillion-dollar new restaurants," Tompras Bogdanos says. "I can't beat that, so I go with consistency, great food, great service and great people working here, and they seem to keep coming."