St. Louis Standards: At the Crossing, a Symphony of Details Adds Up to Success 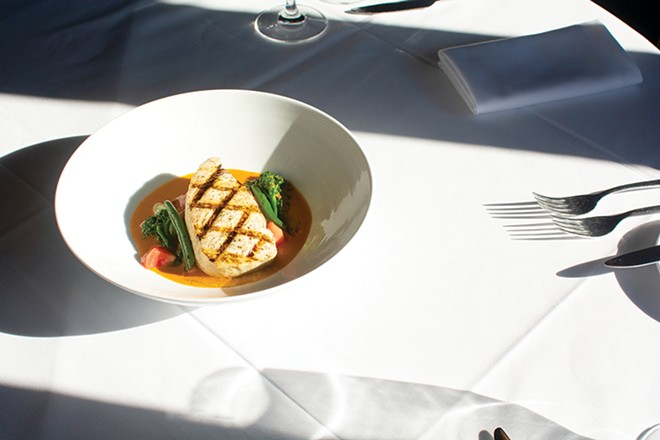 ANDY PAULISSEN
The Crossing has been a mainstay of the St. Louis dining scene for 24 years.

Jim Fiala doesn't think that the food is what makes a restaurant special. It's not the beverage selection, the setting or even the hospitality, but some unquantifiable thing that happens when you put everything together in harmony.

"I am truly convinced that what makes a restaurant a spectacular restaurant is the experience," Fiala says. "It's not the food, not the service, not the atmosphere, not the wine list — it's all of those things together, and then it's the X factor. It's having the front of house and back of house know that they have each other's backs no matter what so they can do what they do. And putting all these little things together: That's where everything pops. When you can give an experience like that, it's magical."

For 24 years, Fiala has been orchestrating those magical experiences at the Crossing (7823 Forsyth Boulevard, Clayton; 314-721-7375), his Clayton mainstay that is beloved by diners for its stunning marriage of Italian and French cuisines. Built on a foundation that spans his tenure at esteemed restaurants in San Francisco, Chicago's famed Spiaggia, and Daniel, the hallowed New York institution, the Crossing has established itself as one of St. Louis' top restaurants and remains as relevant two and a half decades in as it was when Fiala first opened its doors.

However, Fiala traces the Crossing's roots much further back than his cooking career. A St. Louis native, Fiala recalls how much dining out was a special part of his childhood and the way those experiences shaped his passion for hospitality. Growing up in the 1970s — a time when it was unheard of to take children to upscale restaurants — Fiala accompanied his parents to some of the city's best dining establishments, including the iconic Tony's, which was a rite of passage for him and his siblings when each turned thirteen. From the food to the way the maitre d' walked backward up the staircase so as to not turn his back to the guests, the experience was utterly mesmerizing, and quickly seared into Fiala's mind.

Despite his love of restaurants, Fiala instead went to college in Dallas for finance, but found himself floundering. He knew that a corporate job was the logical step after graduation, but he simply could not see himself in that world.

"Every time I would interview at a bank, I would say to myself, 'This isn't me,'" Fiala says. "I just didn't get it. I knew that wasn't what I wanted to think about every day, and I'd walk into these interviews with this briefcase and think, 'What am I even keeping in this briefcase? I'm such a loser.' I had a couple of business cards and a pen and a pad of paper, and I just felt like such a goof."

Unsure of what he wanted to do, Fiala decided to take the year off to work as a deckhand with Clipper Cruise Line and eventually talked his managers into letting him work in the kitchen. His first day on the line he knew he was in love with cooking, and when he finished his time with the ship, he came back to St. Louis determined to pursue a culinary career. He started out with Mark Erker of Catering St. Louis, then decided to leave town for San Francisco to learn at some of the top restaurants in the country. From there, he went to Spiaggia in Chicago and Daniel in New York City, where he met his dear friend, chef Cary McDowell. The two bonded over their passion for food and hospitality, and when Fiala left to take a job cooking at a hotel in Puerto Rico, McDowell soon followed. There, they further developed their professional relationship, creating menus, working out ideas for the restaurant and chatting about what it would be like to open a restaurant of their own.

When Fiala moved back to St. Louis to get married after about a year in Puerto Rico, he was determined to make that dream of opening a restaurant a reality. McDowell relocated to the city shortly after Fiala returned, and the pair dove headfirst into sketching out a vision for the Crossing — a restaurant that would be different than other places that were currently operating in the St. Louis dining scene.

"We were looking at other restaurants at the time — they were 250-seat restaurants," Fiala says. "We purposely looked for something that was about 70 seats, because we didn't want to get too big. I knew that everyone in St. Louis likes to eat at 7 p.m., so I'd have one shot to fill the restaurant for the night. If I had too many seats, I wouldn't be able to do what I wanted to do, which was to make every dish its own entity. I didn't want to have a tray of broccoli and zucchini and a pan of rice on a steam table. I wanted everything to be composed for its particular dish. That was our thing, and it surprised St. Louis."

For the first few years, Fiala, McDowell and Fiala's wife, Melissa, worked nonstop, seven days per week, to make the Crossing a success. Their efforts paid off, as the restaurant quickly gained a reputation as one of the top places for beautifully executed food and warm hospitality. However, they realized that schedule was unsustainable and began cultivating a team around them that they empowered to make decisions. Fiala believes this approach has given the Crossing its staying power and has allowed it to remain relevant in a dining scene that has greatly evolved since 1998. 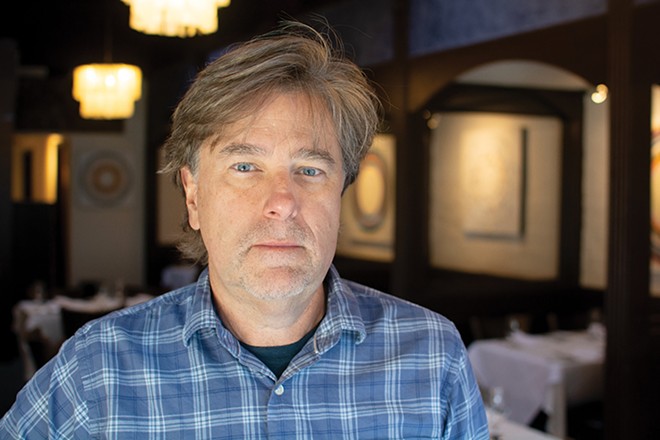 ANDY PAULISSEN
Jim Fiala, owner of the Crossing, makes a point to empower the restaurant's staff.


"When you think about it, you have to have a view of your restaurant that is bigger than you," Fiala says. "I don't work the line every night anymore, but I have brought in young people to the restaurant that are super talented, so there is a lot of vitality and youthfulness in the menu. Letting up on that tight grip of every aspect of every dish and empowering others to make decisions and own them for themselves is what keeps everyone learning. We're constantly trying to get better at what we do; you should never take for granted that you have arrived."

Fiala credits his staff — everyone from the bartenders who consistently turn out outstanding drinks to the valet who reads the St. Louis Business Journal so he can keep up with the goings-on of regular guests — with serving as the foundation of the Crossing's success. He especially singles out his executive chef, Thu Rein Oo, a Burmese refugee who rose from washing dishes to leading the kitchen, as one of the forces that keeps the restaurant so current. His employees inspire him with their experiences and unique points of view, and he inspires them with anecdotes and ideas he's gained over the years, and those he continues to gain with every meal he eats. That experience has given him confidence to operate the Crossing on his own terms, with the unrelenting passion for the business that he insists on sharing with everyone who walks through the restaurant's front doors.

"I don't have to change the cooking I do to impress critics, because I know my clientele and who I am cooking for," Fiala says. "I just think the more I stay true to knowing my staff and my guests who come in the restaurant, and I stay true to making them happy, and stay focused on realizing that I am not some chef god that they should be honored to be at my restaurant — that's what is important. I am honored that they are at my restaurant. The more you keep that humility and remain thankful that you have guests, the more you will have fun. I'm not saying it's always the easiest thing in the world, but there are blessings that come along with it. I've enjoyed the run and still enjoy it. It's a gift that I have been given to be able to love this business."