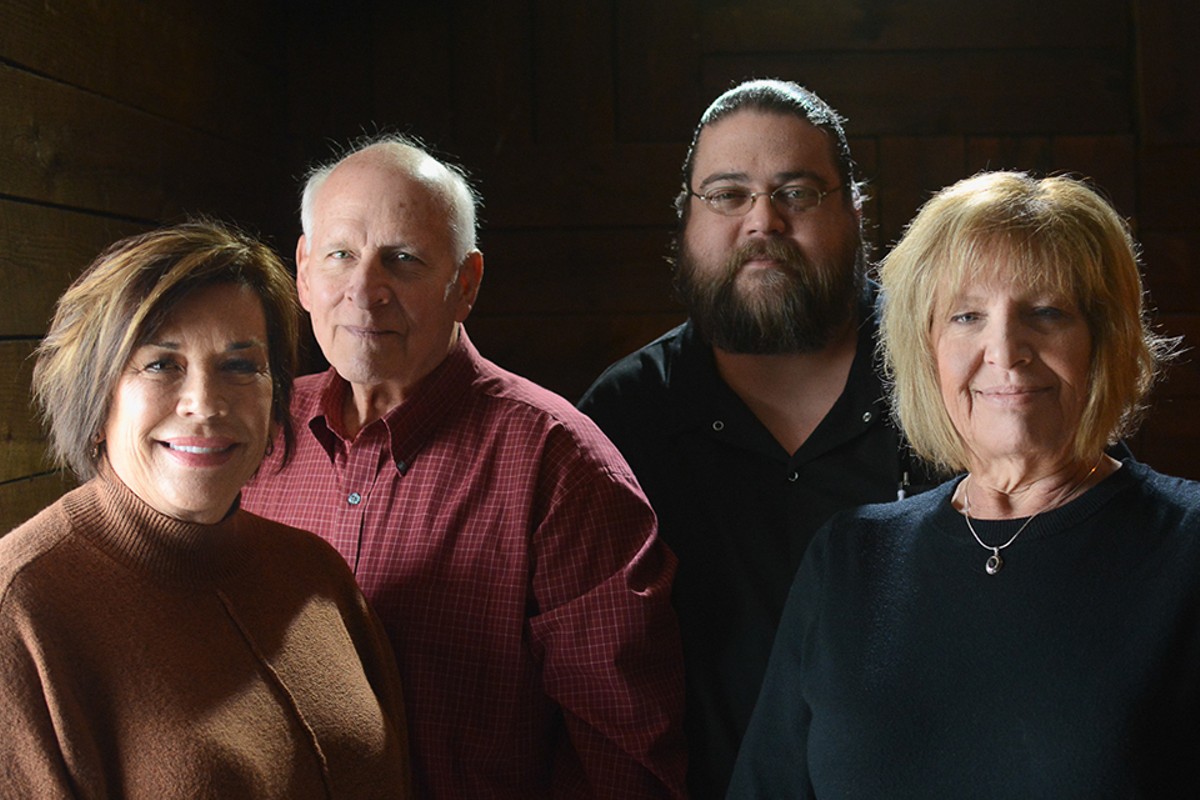 Carol Balducci, Rick Balducci, chef Larry Miller and manager Joanie Balducci Shinall. ANDY PAULISSEN
St. Louis Standards is a weekly column dedicated to the people, places and dishes that make our food scene what it is.


Rick Balducci learned a lot about the restaurant business from his father. Though not a restaurateur himself, the elder Balducci owned a wine distribution company that sold to restaurants, grocery and liquor stores, and he would often take his son along with him on sales calls and deliveries. Even at the dinner table, where his father made a point to not dwell on work all that much, Balducci could not help but pick up bits and pieces about the industry here and there.

However, there was one lesson from his father that Balducci failed to learn.

For 46 years, Balducci refused to heed his father's words and loved just about every minute of it. As the founder of the Maryland Heights Italian restaurant Balducci's, he dedicated the better part of his life to creating not just a place to eat, but a place to make memories. The impact he's had over the years on the lives of his diners and employees is not lost on him as he bids farewell to the restaurant, a victim of pandemic circumstances that made operating the nearly five-decade-old eatery impossible.

Balducci announced his restaurant's closure on October 17, citing an inability to find staff as the reason for its demise. He admits the past few weeks have been bittersweet. On the one hand, saying goodbye to a significant piece of his life's work is difficult, and he feels the pain not only of his own situation but of the numerous other mom-and-pop restaurants like his that are suffering under the weight of the same challenges. However, the outpouring of thanks and support he's received from the community — whether it's longtime guests telling stories of how they met their significant others at the restaurant or former employees reaching out to let him know how much working for him impacted their lives — has warmed his soul and made him realize just how much Balducci's meant to many in his community. 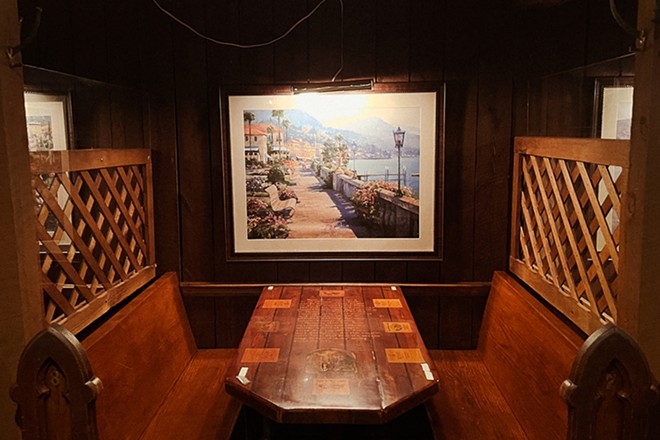 ANDY PAULISSEN
The initial vision for Balducci’s was to create a wine festival-like environment with booths themed individually for wine regions around the globe. Inscriptions in the wood include descriptions of wines, labels and facts about the region.

Even after the difficulties of the past year and a half — and the last few months in particular — Balducci is glad he failed to heed his father's advice. In his defense, he could not have acted any other way; the industry was in his DNA in one way, shape or form, traced all the way back to late nineteenth century Italy. His great-grandparents carried those food and beverage traditions with them when they immigrated to the United States in 1906, working in the grocery, tavern and wine business, and they passed that knowledge to their son, Balducci's father, who developed a passion for wine and opened Balducci Wine Company in 1946.

If Balducci's passion for wine and restaurants came from his father, it was fostered by one of his college business professors at Kansas State University. There on a football scholarship, Balducci had the realization that he wanted to go into business for himself, even if he did not yet know what that would look like. He'd start to color in that outline when he returned to St. Louis following his service as a helicopter pilot in the Vietnam War. 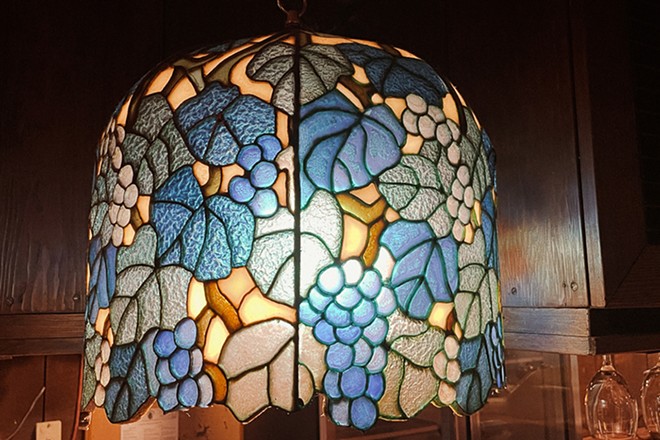 ANDY PAULISSEN
Balducci’s had a classic feel, grounded in decades of food, wine and memories.

"Luckily, I got home safe and sound, and when I got home, I didn't know what to do," Balducci says. "My dad asked me, 'Why don't I start selling wine?' So I did that, then took a trip to Europe and fell in love with the wine business. But I also realized that I didn't want to do what he did and sell wholesale. I wanted to do retail and be creative with décor and menus — basically doing exactly what he told me not to do."

Determined to learn all he could about the hospitality industry, Balducci took a job as a bartender at the then-popular nightclub and lounge the Red Onion while developing his own vision for the kind of restaurant he wanted to open. Soon, he started scouting locations and with his business partners Dave and Steve Bour settled on a small basement spot in Maryland Heights on Bennington Place. They did not have much money, so they built as much as they could themselves and opened in 1976. About a year later, he bought out the Bour brothers, brought on his brother as a partner, and began to grow the restaurant into a Maryland Heights institution.

"We had a decent-sized wine list and deli menu, but as time progressed the neighborhood filled with yuppies," Balducci says. "There weren't a lot of places to go around there at the time, and it turned out the neighborhood was a beer and pizza sort of crowd. We added pizza, eventually deep-dish pizza, pasta — it really took off."

Balducci and his family built upon the success of their Maryland Heights spot with a second restaurant on Manchester Road in west county. When his brother wanted to retire in 1991, they sold that restaurant, which gave them enough money to buy some property in Augusta that would become Balducci Vineyards. Thrilled to have both a successful restaurant and a thriving vineyard and winery, Balducci felt like he was on top of the world.

"It was all sailing along through 2019," Balducci says. "Then you know what happened."

Balducci says that the COVID-19 pandemic was difficult, but it also brought out the best in his guests. They rallied to support the restaurant, keeping it afloat with carryout orders, tipping generously and being generally supportive to Balducci and his staff. However, as dining rooms began to reopen and he tried to get the restaurant back to in-person service, he could not find anyone to work and had to cut hours. At first, he closed for lunch, then shortened dinner hours. Before he knew it, he wasn't breaking even and got to the point where he could no longer afford to stay open. 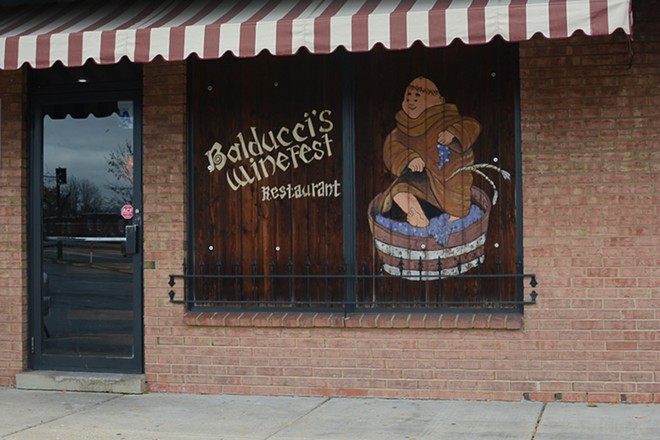 ANDY PAULISSEN
Thanks for the memories.

"I'm sorry to say this, and I hope it doesn't happen, but I can see more of our type of restaurant going down for the same reason," Balducci laments. "Some are doing fine, but others are like us, wondering week to week how they can stay open."

Balducci is clear that he doesn't begrudge anyone for making the decisions that they did to either leave the industry or find work at other establishments. However, if he's learned one thing over the years, it's that a good staff is vital to a restaurant's success, and he encourages other restaurateurs to be mindful of that as they continue to navigate this challenging new reality. It's made him realize how fortunate he was all these years to have great employees, whom he considers family. It underscores the relationship side of the business that he loves so much — one that he looks back on with no regrets.

"Along the way, we have developed some great customers and friends and relationships," Balducci says. "In all that time, it's amazing all the people you get to know, all the employees that go through the place; it was fun to hear how they progressed in life. And the customers — when we closed, we knew it would have some sort of impact, but we were flabbergasted with the response we got on Facebook. It was heartwarming, the fact that people actually cared. It's neat that people actually thought we did a few things right, so that's terrific."