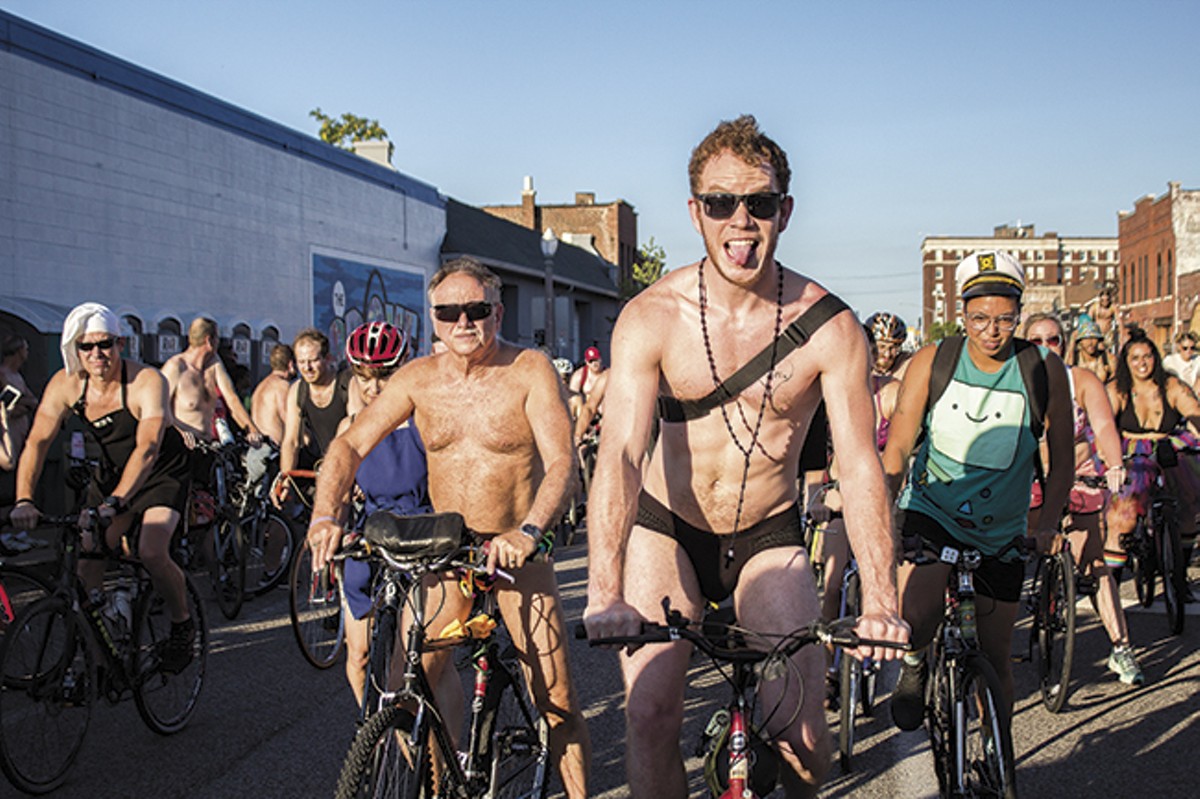 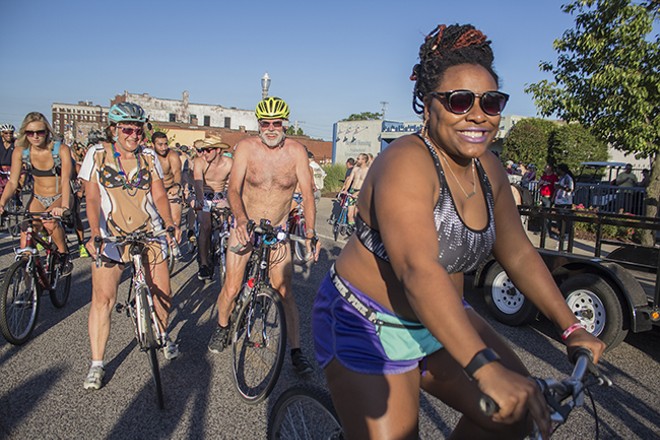 SARA BANNOURA
And they're off!

A quick word about my bike: I wasn't lying to David Wraith. I really haven't ridden in years. The bicycle belongs to my editor's husband, a generous man who lent me the rattling brown Electra with full knowledge that I would be sweating into the seat with abandon. (Thanks again, John. And I'm sorry.)

I straddle the bike and perform an awkward duck-walk through the crush of riders waiting for the signal to start. Whatever that signal is, I never hear it. As if by telepathy, the riders in front of me begin to crawl forward, and I push off on my left pedal and glide into the summer air.

Photographers and gawkers pack the streets at the beginning of the route, returning high-fives and shouting compliments. "Nice tutu!" someone says as I ride past. (It is a nice tutu, long enough to cover my essentials but still short enough to not drag into the spokes.)

I follow the main pack onto Chouteau Avenue, and I'm greeted with a sprawling sea of butts. The butts pedal across all four lanes of the normally busy bridge. The sun has dipped to the horizon, the light casting long, anatomically shaped shadows on the roadway.

A number of cars are pulled over on the long stretch of Chouteau, and I'm not sure if these are motorists who missed the street signage or if they've waited out here for the spectacle. I shoot by a family with small children waving and cheering. In the driver's seat of one of the pulled-over cars, a man on a phone is staring at us and convulsing with laughter.

After about 30 minutes of biking, I identify Kurt Pfao up ahead. He's even more naked than when I last saw him. His feather boa, now attached to his cowboy hat, whips behind him like a cape. 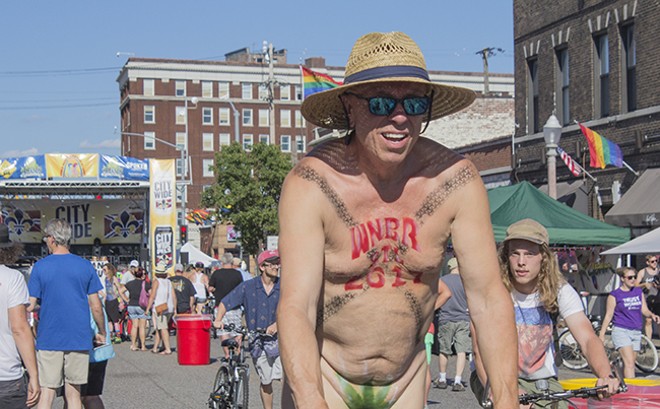 SARA BANNOURA
Nothing beats the air on your shirtless skin.

Shortly before turning onto Compton, I witness a woman standing behind a young boy who is obviously her son. She's clasped her hands over both his eyes.

The riders arrive at the first planned stop outside the Union Station Hotel. Birds circle above the pointed roof of the clock tower as hundreds of cyclists come to a halt behind us. Unused to the rigors of bike-riding, my lower butt cheeks have started to raise the alarm about all this pedaling business. I drink some water, hike up my tutu and re-clamp a suspender strap. Once the next street is cleared of traffic, the riders pour into downtown.

On Washington Avenue, the parade atmosphere is almost overwhelming. Hundreds of people line the sidewalks, whooping and hollering as the riders pedal by in waves. A little boy on his father's shoulders waves at me. At 13th Street, the crowds outside Rosalita's and Blondie's overflow almost into the street.

A few blocks later, as the pace slows to a near crawl, a woman wearing a convention badge catches my eye and manages to ask, exasperated and laughing, "What is this?"

I shout back over my shoulder as I pedal, "It's the World Naked Bike Ride!" 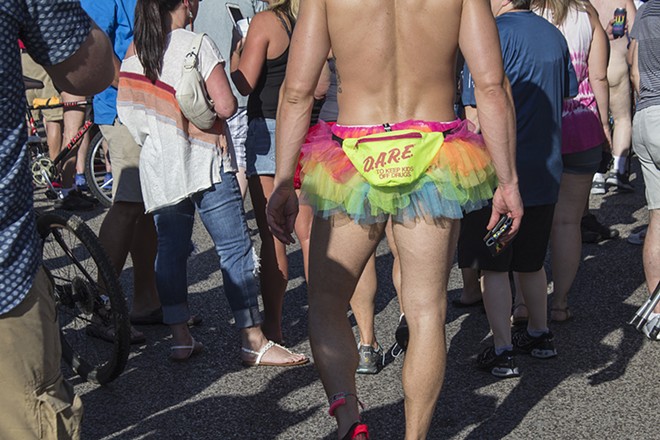 SARA BANNOURA
The writer wasn't the only one to wear a tutu.

About five miles later, with more than half of the route completed, my calves are burning something fierce. My butt bruises have bruises. Even the gentlest uphill slopes leave my lungs heaving.

The ride slows once again while cyclists maneuver past Cherokee Street's trendy bars and venues, and I catch sight of a group of people who appear to be huddled behind a collapsed picnic tent on the sidewalk.

It seems that a church group has chosen the wrong day for their bake sale, and the tent is serving as an emergency barrier between the pious and the profane. I count about a dozen backs turned toward us.

"It's natural!" someone shouts at them. The church members don't budge.

Night falls on the World Naked Bike Ride, and the route's last few miles take us through Tower Grove Park on the way back to the Grove. At some point we pass a bar whose cover band is playing Buffalo Springfield's "For What It's Worth," and the words rattle around my head to the pace of my tired legs.

There's something happening here/What it is ain't exactly clear.

What is St. Louis' World Naked Bike Ride? That's a question up for interpretation. Whether the purpose is protest, the exultant feeling of night air on your skin or just the pleasure of observing sidewalk-bound pedestrians laugh with open-mouthed wonderment — it all somehow works. And sometimes, when the wind brushes through your totally sufficient amount of chest hair, it can even feel like magic.

It's 9 p.m. when I make the final turn of the route, a right onto Manchester. I can hear the thrumming of a marching band's bass drums coming from Telnikova's after-party, which is already in full-swing. I overhear two male bikers talking to each other somewhere close behind me.