The Talking Heads' David Byrne once again reinvents himself, this time as an ambassador of Latin American music 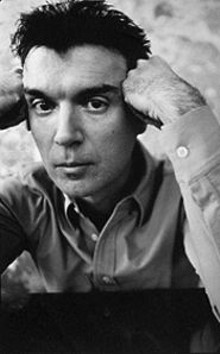 David Byrne -- singer, author, filmmaker and record-label president -- is celebrated for many things, not the least of which is his own music. From the earliest days of his group the Talking Heads, bobbing up and down onstage at CBGB in 1975, to his solo projects of more recent years, Byrne's songs continually have dealt with the twin themes of the alienating effects of pop culture and the resulting difficulty in finding a true sense of community. Along the way much has been made of his singularly homespun intellectualism, artfully intertwined with his pioneering fusion of African source elements into the Talking Heads' own spiky take on new wave. Call it the thinking man's boogie.

What's missing from this equation is Byrne's wonderfully dry sense of humor. It's always been there; just go back to the Heads' 1978 tune "The Big Country," with its wistful, twangy look at the American heartland through a jet plane's window from thousands of feet in the sky. Over a loping groove, Byrne warmly lays out the bucolic scene: a wholesome, orderly, suburban landscape of Little League diamonds, roadside vegetable stands and plenty of free parking. Then the kicker. Just as one expects a sweeping chorus of rustic, back-to-the-country romanticization, Byrne intones firmly: "I wouldn't live there if you paid me."

Much the same spirit comes into play when one tries to get Byrne to dissect his own work. Stop Making Sense, the 1984 concert film that captured the Talking Heads' career-defining hard-wiring of soukous guitar jags, juju jump-up and P-Funk's sprawling downstroke (aided by P-Funk's own Bernie Worrell on keyboards) into their own minimalist twitch (coupled with an inventively McLuhanesque stage show), was reissued in October in an expanded, remastered form to both theaters and home video. Looking back on that musical milestone 15 years later (a production widely cited by critics as one of the best concert films of all time) produces little philosophical waxing from Byrne. In hindsight, is there anything he'd change in Stop Making Sense?

"Some of the projection technology has improved; you could get bigger images on the screen behind us now," Byrne answers in his distinctive trebly voice, one that (like his music) seems to alternate between childlike wonder and seen-it-all bemusement. He pauses and then adds dryly: "I'd get some more up-to-date haircuts; other than that I wouldn't change too much." Laughing deeply now, he finishes, "I'd digitally go in there and fix all the hair!"

Postproduction tweaking is an appropriate way to begin a conversation about Your Action World: Winners Are Losers with a New Attitude, Byrne's latest book. An oversize, graphics-based satire of the advertising industry and its bizarre offspring of motivational speakers, Your Action World revolves around denatured imagery. One focus is the seemingly ubiquitous corporate logos emblazoned on every inch of public (and often personal) space. Elsewhere the book tackles warm-and-fuzzy first-person product testimonials, recaptioned in Situationist style, so a Hallmark-style grandmother purrs, "Now I got a Glock, making motherfuckers duck.... I rob and steal because the money's got the whip appeal." The hip-hop thuggery continues as another white-haired senior, straight out of a family-oriented BellSouth spot, references Tupac: "Fuck my moms and my girl, my life is played out like a Jheri curl. I'm ready to die."

"Loaded images and text can push our buttons," Byrne explains. "It's not that hard to do, and it can direct people to do things. In advertising that usually means reaching into your pocket and spending money. But it could mean something else. The same process used in corporate image-making or branding is used by political parties, whether they're Nazis or Communists, touching deep symbolic chords to tap into stuff that exists within people to get them to do what you want."

Although this media critique seems eerily close to the calls for "positive" censorship by neo-rightists, don't expect Byrne to be joining Art Linkletter in any "Let's Clean Up Hollywood" campaigns. "(The Christian Right) is talking about images of sex and violence," notes Byrne, "but I think something that's wholesome can be just as dangerous, sometimes more dangerous, because it appears on the surface to be good for you." Chuckling, he adds pointedly: "God knows how much damage those Disney films have done to people's ideas about families and nature, that whole idealized '50s world. It really screwed people up. They'd look around and go, "Hey, my family's not like this. What's the deal? Why am I so fucked-up?' That's my problem with censorship: It takes a one-sided view. A big part of me doing this book is not to finger-wag and say, "Look how nasty this is.' It's better to say, "Here it is, and here's how it's happening.'"

Of course, the international hegemonic rise of Western pop culture isn't without its deliciously unexpected side effects, particularly in the musical developments of Africa and Latin America. Whereas late-'60s critics of the Coca-Cola-ization of the Third World decried the inevitable destruction of those nations' native arts, the actual results have been far more nuanced -- and funky. Rather than simply ape James Brown or Jimi Hendrix, many of these Third World artists incorporated them into their own countries' ethnic sounds, fashioning something altogether new in the process.Purists may turn their noses up at these mix-and-match sonic Cuisinarts, but not Byrne. He has reinvented himself as their ambassador-at-large by way of his Luaka Bop label, issuing their work (with major-label distribution and promotional muscle from Warner Bros.) to a wide American audience. Indeed, it's hard to imagine the current surge of hipster Anglo interest in Brazilian tropicalismo, Cuban beats or rock en espa ñol without Byrne's Luaka Bop releases (their first domestic issuances) from Tom Zé, Jorge Ben, Silvio Rodriguez, Grupo Vocal Sampling, King Changó, Los Amigos Invisibles and Bloque."As an outsider, I can hear the similar impulses manifesting themselves in a lot of these rock en espa ñol groups from different countries," Byrne says. "It seems like the same process is going on in each place, and they're finding their own unique solution to dealing with their cultural and musical identity."

One country whose cultural development Byrne doesn't find encouraging is Cuba. Although Luaka Bop's 1992 release of New Directions in Cuban Music: Diablo al Infierno was a crucial catalyst in introducing the island's late-'80s and turn-of-the-decade experimental currents to the world, don't expect the label to produce a sequel. For Byrne, who last visited Cuba in the early '90s ("when the dollar was still illegal"), the musical conversation between that nation and the United States has become too one-sided.

"The stuff I've heard coming out now is all rap. I have some friends who love it," he says, "but for me it's not musically capitalizing on what's deep-rooted in the culture. It's an imitation of what's being heard over Miami radio."

Still, Byrne is all too familiar with the notion of self-estrangement. "Once I've finished a record, I never listen to it again. Sometimes I'll hear something I like on the radio, and somebody will point out, "That's you! That's from Stop Making Sense!' I won't even recognize it."