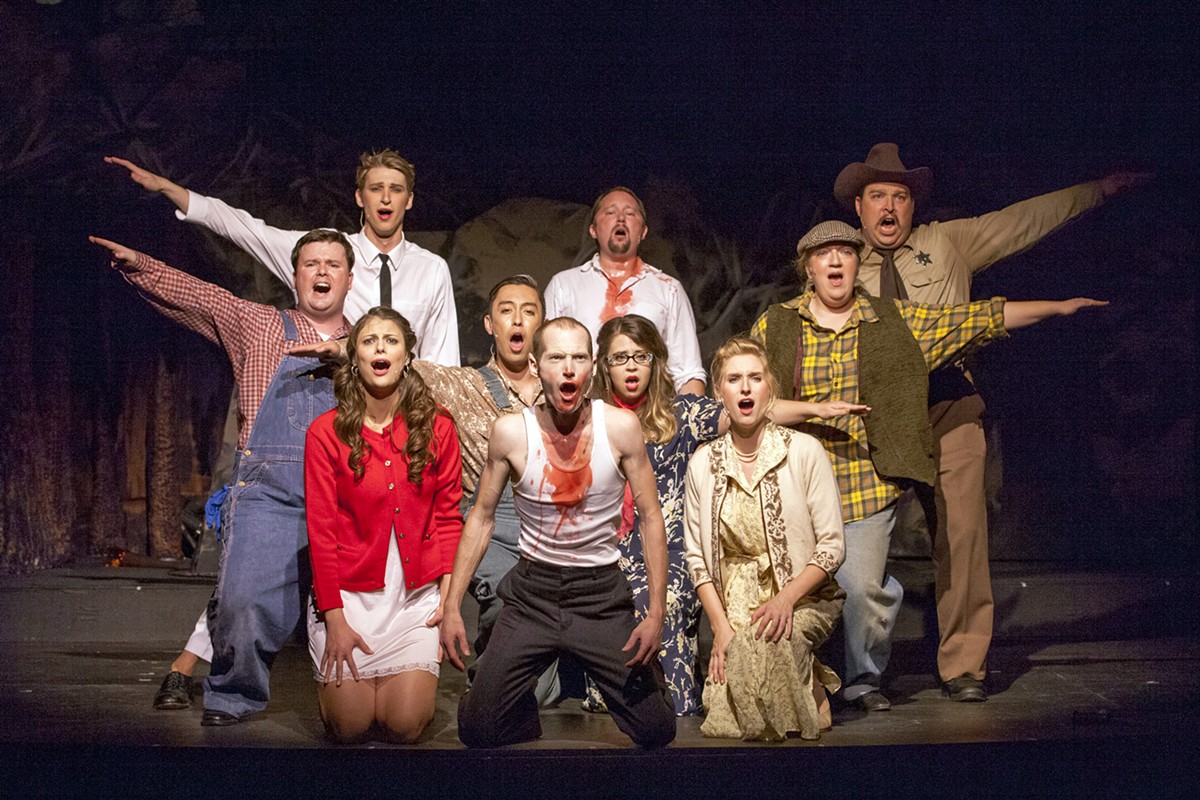 For one shining moment, everything is grand. JOHN LAMB

Story and book by Keythe Farley and Brian Flemming

Music and lyrics by Laurence O'Keefe

Directed by Justin Been

Presented by Stray Dog Theatre through August 20 at the Tower Grove Abbey (2336 Tennessee Avenue; www.straydogtheatre.org). Tickets are $20 to $25.
Bat Boy: The Musical is a sad, beautiful show. Justin Been's current staging of the play at Stray Dog Theatre is in fact much sadder and more beautiful than I recalled from previous productions. The musical is based on a long-running series of wildly fictitious stories that ran in the Weekly World News tabloid about a half-bat, half-human child who was discovered in rural America. Its essential tabloid elements — horror, fear and a primal being — are the same ingredients that would make a great myth. And so Bat Boy transcends the supermarket check-out to become the star of Keythe Farley, Brian Flemming and Laurence O'Keefe's off-beat musical.

This modern legend could be used as a framework for a parable about fears of miscegenation, or immigrants, or racism, or a hundred other social issues. But Been and the extended Stray Dog family suffered a great loss recently with the death of longtime production manager Jay V. Hall, who took his life in early July. His absence informs the show, or at least seems to inform the show, with a strain of melancholy that colors the production with a gentle reverence for the value of life. Even if you didn't know Hall, you'll find this Bat Boy overwhelmingly sad and yet somehow life-affirming.

Corey Fraine is our Bat Boy, who is discovered in a West Virginia cave by the teenage Taylor kids. Startled by their intrusion, Bat Boy bites Ruthie (Lindsay Taylor) and is then clobbered and captured by her brother Rick (Michael A. Wells). The creature ends up in the custody of the Parker family, whose patriarch is the town veterinarian, Dr. Thomas Parker (Patrick Kelly). While the town argues that Bat Boy needs to be killed for the public's safety and that of their cattle (which are being mysteriously killed by exsanguination), Mrs. Meredith Parker (Dawn Schmid) wants to keep and civilize him. Her motive may be just to escape her empty marriage, but his care eventually becomes a bonding activity with her teenage daughter, Shelley (Angela Bubash).

Fraine is simply astonishing as the Bat Boy, his slender physique and pointed ears accentuated by the crushed velvet jacket and short pants Meredith dresses him in. His eyes dewy with fear, he recoils when anyone looks at him too closely. Fraine contorts himself, craning his neck in an unnatural fashion while listening to Meredith speak, and bounds around the Parker living room on all fours while learning to read during the excellent patter song "Show You a Thing or Two."

Meredith's teaching takes hold, and before long Bat Boy is going by the name Edgar and speaking with a British accent. He and Shelley also find themselves drawn to each other. Edgar is polite and eager to learn, while Shelley's boyfriend Rick is eager to hate and destroy — and his anger is aimed at Bat Boy in particular. But Rick's sister Ruthie still languishes in the hospital, unable to heal from Edgar's bite; the longer she suffers, the angrier and more bloodthirsty Rick and the town grow. Compound that rage with Dr. Parker's increasing desperation to fix his relationship with the Mrs., and bad things feel inevitable.

Tyler Duenow's moody lighting compounds the audience’s sense of dread. Dark blues and shadows dominate the stage in Act One, as our little outsider encounters the horrors of the real world. The first half ends with the ensemble entering the darkened stage singing the refrain "Comfort and Joy" while wearing masks on the front and back of their heads. Dr. Parker joins in, melding his thoughts of killing Bat Boy with their song. It's a grim portrait of the duplicitous nature of people, but it's not the show's lasting image.

Instead, I find myself recalling the moment when Schmid and Bubash come together to sing the soaring "Three Bedroom House" in the second act, a hopeful song about better days. The stage is lit up as Meredith and Shelley sing themselves the perfect future — one where they escape the murderous Dr. Parker and this wretched town together with Edgar, and they live happily ever after. Schmid and Bubash's voices lift each other up and out of the darkness that has dominated the show, offering hope in a world that has known only sorrow.

That's what the theater can do, and it's what this production celebrates. A group of people come together in the darkness and create life from dreams, and for a little while their optimism shines and holds off the grim ending.