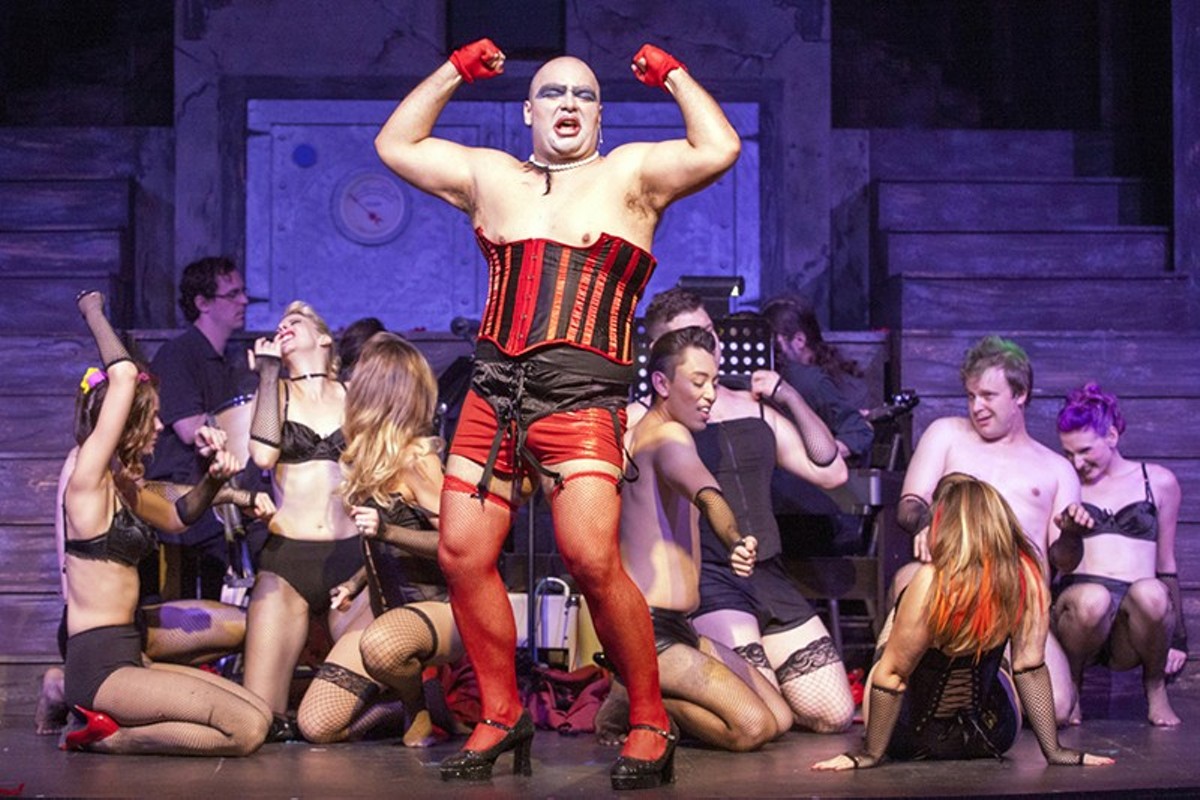 Book, music and lyrics by Richard O'Brien. Directed by Justin Been

St. Louis is in dire need of a weekly midnight screening of The Rocky Horror Picture Show. This became clear partway through the first act of Stray Dog Theatre's terrific new production of The Rocky Horror Show. Director Justin Been's conception is a combination of the stage and screen versions of this cult classic — the cast performs the original musical, and, as at film screenings, the audience is encouraged to sing along and shout out their favorite talk-back lines. Rocky Horror habitués come prepared to yell funny stuff at the actors in the film; the best comments often set up a character's next line in call-and-response fashion. Audience members also deploy a host of props; for example, when a character calls for a toast, everybody throws toast at the screen.

In the Stray Dog version, talk-backs are welcome, but no audience props are allowed. It is admittedly a strange animal, this hybrid Rocky Horror, and it would be a lot more fun if audience members came ready to play. Instead, on the night I saw the show, a handful of people in the crowd delivered the classic lines well, but most of the house was in the dark about what to shout and when to shout it. The program gives some brief instructions — shout "asshole" when someone says Brad's name, shout "slut" after someone says "Janet" — but even these were often delayed. And unfortunately, some dudes enjoyed braying "slut" too much, and too late. It was more disruptive than fun. St. Louis, which used to be a Rocky Horror stronghold, has apparently lost its way.

Even with that, though, the show is a corker. Magenta (Maria Bartolotta) opens the play with a rendition of "Science Fiction" that is both sweet and aching, setting the tone for the rest of the night. It's a challenging song, but Bartolotta pulls it off effortlessly.

Kevin O'Brien and Heather Matthews are our Brad and Janet, who drive a car made out of the supporting cast of phantoms (they cleverly supply both headlights and windshield wipers) that breaks down during a storm. Director Been has devised several visually appealing moments like this wriggling automobile, and he tastefully augments them with digitally projected effects, such as the rain that flickers over the pair during their performance of "Over at the Frankenstein Place." Matthews and O'Brien sing together beautifully, edging their hopeful voices with trepidation as rivers of smoke fall off the stage and flow into the crowd.

And then we're at the Frankenstein castle, and the show really takes off. Scenic designer Robert J. Lippert has surpassed himself here — twin staircases climb up to multiple elevated walkways and secret passages. It's as much playground as it is scenery, and the cast makes the most of it.

But it's Michael Juncal who steals the show as Dr. Frank N. Furter, renegade scientist and freaky-deaky gay cross dresser. Juncal is bulkier and balder than the typical stage Frank, and he throws every inch of himself into the role. His "Sweet Transvestite" is campy, his "Charles Atlas" is engorged with lust, and his performance of "I'm Going Home" is a world-weary Götterdämmerung. He also fires back at sloppy crowd comments with the venom of a thwarted lover. If you're gonna come at the queen, you best not miss.

If this reads like effusive praise, that's because it is. There isn't a bad moment or misstep in this show. Riff Raff (Corey Fraine) and Magenta are perfectly creepy and yet sweet together. Fraine's angular frame is reminiscent of the great Richard O'Brien and he has similar timbre, but Fraine makes Riff Raff his own man. The Narrator (Gerry Love) is an authoritative creep (watch how he swabs people for biological samples in numerous scenes), Michael A. Wells kills as Eddie during ""Hot Patootie," Magenta and Columbia (Sara Rae Womack) bring a much-appreciated wackiness to their roles (they're a scream in "Touch-A Touch Me") and Luke Steingruby is the hottest Rocky Horror ever, and that includes the film version. He's built like a Greek god and he wears the smallest set of sparkly gold panties you've ever almost seen — is it any wonder he sets off the chain reaction of lust and sex that follows? (It is not.)

So go see it. But work on your lines before you do. This production is too good for your late quips and weak nonsense.