Sunny-Side Uprising: Half & Half gives breakfast the bistro treatment 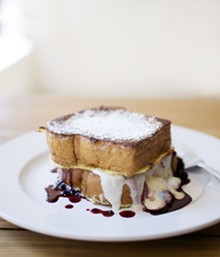 Sunny-Side Uprising: Half & Half gives breakfast the bistro treatment

The most surprising fact about Half & Half is that nothing like it already existed when it opened in Clayton three months ago. The concept behind the restaurant is simple: Treat breakfast — the most important meal of the day, after all — in the same manner that a contemporary bistro does dinner. Here you can pair your eggs with pork belly cooked sous vide, and the steak in the steak and eggs is the cut beloved by American bistros, the hanger steak.

It should go without saying that coffee is no mere rocket-fuel commodity here. If you want, you can have the barista brew your cup of joe to order, filtering it through cloth, though the "ordinary" brewed coffee that fills your bottomless mug is damn good, too.

Half & Half is the latest venture from Mike Randolph, owner of the Good Pie in midtown. Unlike that space, which is dimly lighted, cozy and decorated with a bicycle motif, Half & Half is bright and bland. Not a single piece of art or other décor interrupts the off-white walls. The single room is basically split in half, with tables and booths on one side, the coffee bar (with counter seating) and a few high-top tables on the other. The kitchen is open but noticeable only if you sit at the bar.

The breakfast menu is split into egg dishes and "Sweets." From the latter I tried the blueberry pancakes, three thick discs with lovely browned exteriors and studded with ripe, juicy berries. The pancakes come topped with three generous dollops of blueberry butter, rich and very sweet; on the side is authentic maple syrup. Between the butter and the maple syrup, these could have been cloyingly sweet, but the cakes themselves have enough substance — they are not "fluffy" — to provide the necessary balance.

Doughnuts (listed along with fresh fruit and cornbread as a breakfast "starter") are not the traditional doughnut shape but bite-size pieces of fried dough dusted with cinnamon and sugar and piled into a coffee mug. Eat these quickly (they're portioned to share). When the batter is still hot and gooey, it is divine.

Many of the egg dishes pair two sunny-side-up eggs (always perfectly cooked, whites set but not overcooked, yolk liquid but not runny) with meat or seafood. These preparations are not overly elaborate. The "Cornbread & Chorizo" brings the fried eggs, two pieces of cornbread and a heap of Mexican chorizo mixed with a little diced red onion and cilantro. You can eat each component on its own, of course, but the dish works best when you mix it all together: The gentle sweetness of the cornbread contrasts with the sharply spiced sausage, while the egg acts as a bridge between the two.

Brined for 24 hours and cooked sous vide for twelve hours and then deep-fried to order, "Crispy Pork Belly" arrives with crunchy exterior as advertised, yielding to tender, full-flavored meat luscious with rendered fat. The egg adds an extra layer of richness — the dish is almost too rich, really. (The menu description mentions balsamic vinegar, which would have been welcome, but I tasted no trace.) The belly comes topped with peaches whose sweetness is lost amid all the protein and fat.

The fried-egg sandwich is exactly as advertised: egg, crisp bacon and melted cheddar cheese on a brioche bun. An omelet with cheddar and Brussels sprouts is similarly straightforward and simply good. These and most other savory breakfast dishes come with a side of oven-roasted potatoes. These are crisp outside and soft within, but they're underseasoned. Make sure your table has salt and pepper. A couple of intriguing dishes — a salmon "hash" and fried chicken livers with a caper aioli — were unavailable on my visits, which was a bit of a letdown. (The restaurant does also offer a couple of specials on weekends.)

Half & Half serves breakfast all day, but there's a lunch menu that includes salads and sandwiches. The lunch selection isn't as compelling as the breakfast fare — it feels obligatory rather than inspired — but I did like a sandwich made from slices of hanger steak cooked to the diner's desired temperature, along with cheddar cheese, fried onions and tangy barbecue sauce. Still, I wished I'd ordered breakfast instead.

Half & Half's coffee service is extraordinary. The restaurant serves coffee from Kaldi's Coffee Roasting Company, and Randolph brought on Kaldi's award-winning barista Mike Marquard as manager. Unlike your usual coffee shop, Half & Half doesn't differentiate between the beans it uses for regular brewed coffee and espresso drinks. Instead, two varieties are offered, and diners can pick the one they want their drink made with. On my visits the choice was between single-source coffees from El Salvador and Costa Rica.

You can get your coffee as a plain-old drip brew, but why would you when you could opt for either an AeroPress brew or that connoisseur's favorite, the cloth filter. The AeroPress yields four ounces of concentrated coffee, somewhat akin to espresso. You're served hot water on the side to cut the strength to your own taste — sort of a mix-your-own Americano. For a cup of coffee that looks like regular joe but packs much more flavor, go for the cloth filter. This allows more of the coffee's essential oils to seep through, resulting in a rich flavor as well as a fuller, almost silken mouthfeel.

The kitchen can be slow, especially when the restaurant is very busy, and service can be little too informal. On one visit the server who led us to our booth scraped a few crumbs off my seat with a copy of the menu — and then handed me that menu. Also, there are flies. Not so many that you consider ordering a swatter, but enough so that you can't help but notice.

"We're well aware of [the problem]," Randolph told me when I called to ask about the uninvited visitors. He's inclined to blame a Dumpster behind the restaurant, which, owing to space constraints behind the restaurant, can't be relocated, and he says his staff is employing various modes of defense, from bleaching the garbage receptacle to having it emptied more frequently to — you guessed it — flyswatters. "We're trying our hardest," he says.

Like the stumbles in service, the flies are essentially just a nuisance. The folks at Half & Half have set a high standard for themselves, though, and there's still work to be done in order to refocus the spotlight where it belongs: on the food.