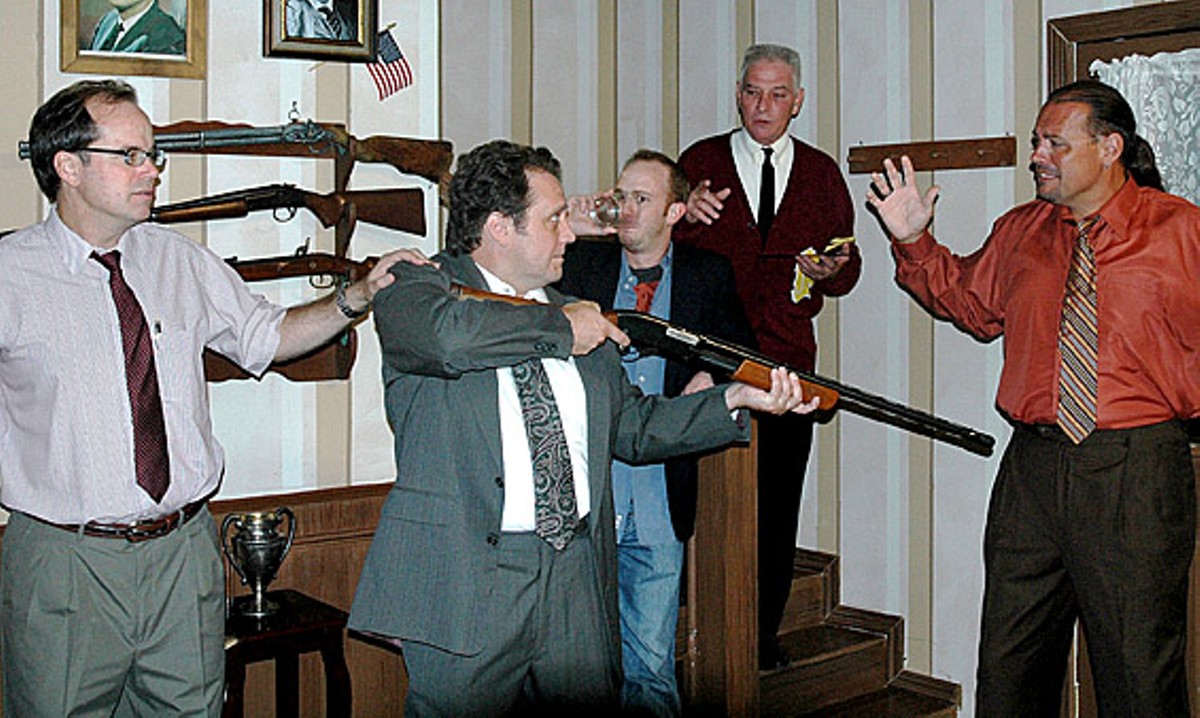 That Championship Season
Through August 22 at the Dramatic License Theatre in Chesterfield Mall (space 291, next to Sears and Houlihan's).
Tickets are $18 to $20 and may be reseved at www.dramaticlicenseproductions.com.

Who doesn't enjoy a good reunion? At the outset of Jason Miller's pulsating That Championship Season, all is bright levity. Four members of a state championship basketball team gather at the home of their former coach to celebrate the twentieth anniversary of that glorious victory. But all is not as it seems. As the layers of self-deception are stripped away, each is revealed as a sad and lonely loser. The town mayor (R. Travis Estes) is about to be defeated in reelection. A wealthy strip miner (Cameron Ulrich) is having a tawdry affair with the mayor's wife. A junior high school principal (B. Weller) is suffocating in mediocrity; his younger brother (Charlie Barron) is a rootless alcoholic. Their beloved Coach (Kevin Beyer) was forced into retirement after breaking a student's jaw.

Ever so occasionally, an American play crystallizes an era: Arthur Miller's Death of a Salesman in the hardscrabble post-war 1940s, Miller's The Crucible in the accusatory '50s. That Championship Season, a blistering drama about the emptiness of distant dreams, is the defining American play of the cynical 1970s. Its initial life — first at New York's Public Theater and then on Broadway — paralleled another disillusioning "drama" from that decade: the escalating Watergate scandal.

Championship debuted off-Broadway in May 1972, one month before five men were arrested in Washington, D.C., for trying to bug the offices of the Democratic National Committee at the Watergate hotel and office complex. It transferred to Broadway even as Watergate began to dominate the headlines, then ended its two-year run (the longest for a Broadway drama since A Streetcar Named Desire in 1947) just four months before President Richard Nixon resigned in disgrace. Obviously, Miller did not know that Watergate was about to explode when he wrote his script. But Championship did herald an encroaching and pervasive distrust of authority that was poised to tarnish the very fabric of American life.

Although each actor has his showy moment, and although the sense of ensemble will surely solidify with every performance, Kevin Beyer already is delivering a thundering portrayal of Coach. Even before this team patriarch arrives onstage, we're told that he has been ill. Beyer then enters looking like the specter of Death. (By evening's end, we realize that the Coach personifies the death of the American Dream.) He mesmerizes us with his reactionary political views and frightening bigotry. Under the watchful eye of director Alan Knoll, Beyer's coruscating performance is the stage equivalent of a full-court press.

It seems as if there is a direct link between the corrosive Coach and the more genteel Grandpa Vanderhof in You Can't Take It With You (1936). Grandpa and Coach both speak for America, yet what a radically altered America they inhabit. George S. Kaufman and Moss Hart's optimistic Depression-era comedy, which will be staged by the Repertory Theatre of St. Louis next month, is another masterwork that evokes an era. To see these two Pulitzer Prize-winning plays in close proximity is to receive a crash course in how America devolved through the twentieth century.

Championship is infrequently staged today, which makes this current Dramatic License production all the more welcome. The pithy, often bawdy dialogue remains crisp and fresh. It's been suggested that the play is rarely seen now because corruption in America has so spiraled out of control (think Enron, think Madoff) as to make Championship's misdeeds seem almost puny, or even naïve. Not so. Jason Miller's characters continue to sound an alarm as prescient as anything Cassandra ever forewarned. In the most theatrical terms, That Championship Season reminds us that excessive power always corrupts. It happens in the courthouse, it happens in the state house, it happens in the White House. And yes, uncontrolled power can even corrupt a high school basketball court.